Asia Doesn't Want to Be Part of the West's World Order 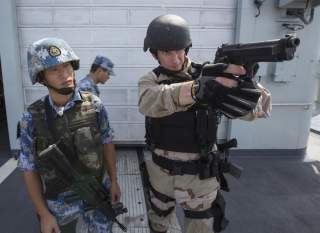 Amid the global attention on the uncertainties of the global economy, if not the global order as we know it due to Brexit, commentaries and forecasts are left in a frenzy, leaving some to wonder whether the United States has now reaffirmed—if not been given the incentive—to act on its deepest desires to focus more on Asia as opposed to the West. Looking to adjust to a new reality while at the same time wishing to give assurances to old friends, public statements made—and not made—by elites have set a tone in which it has become common to question the validity of the “European project” if not the Western appeal at large.

Whatever one’s opinion may be regarding this milestone, perhaps it would serve us better had we muted the predictions about Asia now before they even reach such outlandish levels. With emotions and guesstimates running high, from China’s actions on the high seas to “terrorist refugees” and now Europe’s uncertain future, it has yet to be seen what in fact has actually changed or likely will change regarding the “Old World”, in addition to the one that apparently matters more for this century’s success—Asia.

To start, the overriding structures that have shaped the Far East have remained unaffected despite all the white noise from the West. As Donald Emmerson jokingly put it, when it comes to this place, the dynamics boil down to the Americans making the peace, soon followed by Asians making the money. Such crude generalizations remain intact especially when looking at the security nexus of this vast region. Looking beyond minor successes, such as American advancements between the Philippines and the Vietnamese, to partially-buried hatchets between the Japanese and South Koreans, U.S. presence and specifically its military presence, has continued to be the one constant for which nearly all parties—except the Chinese—can more or less agree upon.

Of course, it would be too naïve to think that this “pivot”, or “presence” or whatever else you want to call it was not without its faults. Obama’s economic centerpiece for the shift, the Transpacific Partnership, intended to bolster more inclusion in Asia, has only now entered the ratification process in an all but dysfunctional Congress. Not surprisingly, skeptical estimates have already begun; Barack Obama, like David Cameron, has just started his lame-duck session in office.

The West By Default?

Still, peering deeper into the security machinery America provides and for which Asia benefits, one would easily notice that ASEAN is nowhere near to becoming a NATO, and historical, if not territorial baggage remain across the board. Such hurdles would only distract from the commitments needed to increase complicated missions no doubt. Even with voluntary actions taken by those who talk a bigger game, such as Japan’s “upgrade” of its military to Indonesia’s uptick in peacekeeping missions, all may still find themselves out of sheer domestic constraints if not a profound risk aversion that has yet to be tested.

Would full-fledged American allies such as the Japanese and South Koreans be willing to put their troops in genuine harm’s way and for the long haul when operating in hot spots? Would they along with ASEAN members be willing to move beyond the supportive, hence politically safer roles they normally opt for? Apart from trying to dampen Chinese belligerence, what other meaningful commitments have Southeast Asian partners truly made for security assurances elsewhere? Common sense dictates that Asia, though important, is not the only vital area for which the world needs extra protection.

Though detractors would be right to point out that even the West has demonstrated its own failure to step up, such nitpicking of lower defense budgets and the West’s own version of risk avoidance would only miss out the bigger issue. If anything, when it comes to managing the global “public good”, potential partners in Asia appear to contribute when the circumstances align with their interests and not much more. Even if selfishness defines Western action, if not all action, what separates the Transatlantic connection as opposed to others is a storyline that underpins it all and for which the participants pay considerable respect. Call it “humanitarian-capitalism”.

This creed, foolish or not, is undoubtedly an essential ingredient in which the United States, Britain, France and other European partners have conditioned themselves for how they should function and should the opportunity arise. There’s just one problem. The Asia-Pacific has welcomed the latter with no guarantees on the former.

Of course, to give credit where credit is due, there have certainly been far-flung global assistance here and there. And yes, joint exercises and relief missions that should be applauded. But it is still open to discussion whether Asia as a whole, or even a specific nation within it is ready to take on that “special relationship” with America; to share that vision of not just what the world is, but what it ought to be while putting risky chips on the table for a cause beyond their own. This lack of impulse, to not just donate but to literally shape the world, regrettable to its disciples and delusional to its critics, is what differentiates the West and America in particular.

The Devil You Know

In the end, alarm bells will go off for some time as they always do when there is a perceived shakeup in world events. Whether the Brexit merits such a platform has yet to be fully known. What is known however is that the U.S.–British and European alliance, though imperfect, has been and will likely remain the more “reliable” partners in seeing through what Michael Ignatieff calls America’s burden: a global hegemony whose grace notes are free markets, human rights and democracy.

Putting into context such grandiose and perhaps fanciful ideas, Asian associates would no doubt welcome America’s partnership—meaning protection—along with the prosperity it provides. It’s just that in this neighborhood, its own contribution to such an agreement should assist its own residents as opposed to a zeal to seek out progress for others—and that of course would be un-American.