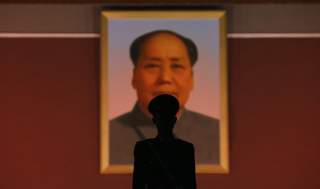 Jacob Heilbrunn: What is your assessment of the approach of China and America to North Korea?

Maurice R. Greenberg: When it comes to North Korea, there is no visible change that you can see—obviously there is a lot of gossip about the situation. When I met with President Xi, I asked him directly about North Korea, and he said that they are working on it—he wasn’t very specific. That has to be a high priority for us: South Korea and Japan. If we don’t see progress, then sooner or later, Japan and South Korea will want to become nuclear powers. That is not in China’s interest. Everybody knows that, so the question is obvious: what has to be done?

It is not the missiles that I am concerned about, it is the leader, Kim Jong-un. How do you change him or get rid of him? It has to be one or the other. I can speculate, but that doesn’t do any good. All the countries involved know what I am thinking as well—they’re thinking the same way. It must be resolved, and it is going to be sooner rather than later.

Had Europe, France and the United States acted on a timely basis and stopped Hitler before he really started, World War II might have been avoided and millions of people would have been saved. Failure to act is not a great strategy.

Heilbrunn: Do you think Russia will play a role in the resolution?

Greenberg: They are playing a role now by trading with North Korea. President Trump has alluded to this. How do you cut off all trade? China is still trading with North Korea. I don’t know if there is an easy solution. It is unclear how President Trump can influence President Vladimir Putin. They spoke in Vietnam and had conversations on different topics—including Syria, including allegations of interfering with our elections.

Heilbrunn: What should President Trump do next toward China—what would be beneficial moves for American interests?

Greenberg: Don’t have a meeting, as President Trump and President Xi did, which from all outward appearances was quite good, but then President Trump departs China and starts hammering on about something different. You have to be consistent with what you are doing. I was in China about the time when President Trump arrived. I am on the advisory board of Tsinghua University, the top university in China. After the advisory board meeting, we met with President Xi. I think President Trump had a much better visit and relationship with President Xi than I think many people realized or acknowledged. Many of the things that China gave in on were being negotiated for some time before, but nonetheless, there was definite progress. China did agree that foreign life insurance companies, which currently could own up to 50 percent of a life operation in China, will go to 51 percent very soon, and in five years, likely to 100 percent, which is a major step.

Whether it applies to other than life companies remains somewhat vague. My guess is the insurance market will open up in a reasonable period of time. That is a good thing. China has more banks and financial services than ever before, and that is good. From the point of view of progress on things that were irking many American businesses, there is some progress, but we should continue to negotiate and move the ball forward.

Heilbrunn: One topic that’s faded away is the issue of control over the South China Sea.

Greenberg: Well, how much is China’s fault and how much is our fault? President Obama did nothing about it. He walked off the stage internationally. And the vacuum got filled right away. China filled the vacuum in Asia, and Russia filled it in the Middle East. That is the reality. Now you want to take it back? Good luck. It is much harder to do.

Heilbrunn: So you think Obama is the culprit, at bottom?

Greenberg: I think he walked off the stage internationally. You can call it anything you want, define it any way you want, but the fact of the matter is he did. When China first began to build these little rocks into islands, and ignored the decision in the World Court on the Philippines, what did we do? We did nothing.

Heilbrunn: What do you think about the eleven Asian nations agreeing on economic trade, and the United States being on the sidelines?

Heilbrunn: With all the talk about “America First,” is free trade in danger?

Greenberg: I don’t think in the rest of the world.

Heilbrunn: But what about the United States? We have a lot of conflict now with Mexico and Canada on NAFTA. President Trump periodically threatens to jettison the trade agreement.

Greenberg: I was very involved in NAFTA during the George H. W. Bush administration. Carla Hills was then the U.S. trade representative and the chief negotiator of NAFTA. I was on her committee and we worked very hard together to get a satisfactory agreement with Mexico and Canada.

The bottom line is this: you can’t have it all one way. There has to be a balance. Things change and periodically trade agreements have to be reviewed to make sure that you’re getting the results that you intended, and to check whether a change has taken place that requires some modification—that is always the case, so I don’t fault that. But the tone you adopt, how you say it and how you go about it, is very important. Mutual benefit, not a futile attempt to extract unilateral concessions and pocket the gains, is the key.

Heilbrunn: So are we ceding the ground globally, as some claim, to China?

Greenberg: I think we are conceding a great deal of it. Appearances are very important.

Greenberg: That is exactly right. And you know, the Party Congress did a great deal for President Xi. He is the unquestioned leader now, at the status level virtually of Mao Zedong. He has a second term for five years, but nobody on the Standing Committee of seven is being prepared to be the president—they will fall for the age limit. So the likelihood is that President Xi, if I had to make a wager, if he stays in good health, will be around for more than another five years.

Heilbrunn: What about the prognosis for Russia? There’s Putin, and then what happens next?

Greenberg: Well, he will be around until he dies. He is not a president, he is an authoritarian.

Heilbrunn: How did Russia end up going down this road?

Greenberg: The Chinese as well are looking at that, at what happened to Russia—or the Soviet Union after 1989 when it ended up collapsing—and they don’t want to make the same mistake of promoting policies that lead to internal dissolution. So in that sense, Russia, from the Chinese viewpoint, is an example of what not to do.

Heilbrunn: Tensions are mounting in another region: the Middle East. How do you view the region’s future?

Greenberg: If Lebanon goes down, Iran is the winner. If Saudi Arabia then becomes in danger, we will probably be there to help them. Russia has been on the side of Iran; we’ve got to neutralize the Iranians.

Heilbrunn: Do you foresee another war in the Middle East?

Greenberg: It can happen—and we would be involved.

Heilbrunn: How likely is it that Trump would reach some kind of an accommodation with Moscow?

Greenberg: I would say this: a world where the U.S. and China are allies is a much safer world than if China and Russia are allies. That would be a concern. So we have to keep that from occurring. We have to try and neutralize Russia, not give in to them, but on the other hand, not treat them like they are a third-rate country.

Heilbrunn: So you prefer a kind of Asia-first foreign policy: join up as far as possible with China to promote world stability.

Greenberg: Yes, but we have to have a good relationship with India at the same time. China is going to resist that.