Asia's Next Worry: An 'Assertive' Japan? 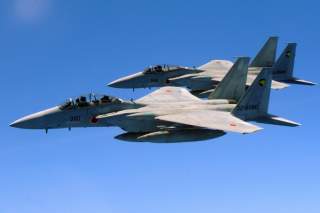 However, the truly historical shift came with last Monday’s revision of the U.S.-Japan Defense Guidelines, the first since 1997. This revision outlines how the Japanese Self Defense Forces (JSDF) will interact with U.S. forces in a range of cases, including collective self-defense. And there is room for expansion. While the phrasing of “countries in a close relationship with Japan” applies now to the United States, in the future, such phrasing could justify the defense of countries like Vietnam or the Philippines.

These revisions are the latest step in a long trend towards a more assertive Japanese foreign policy. It follows last summer’s reinterpretation of Article 9, the clause of the Japanese constitution that renounces war as a sovereign right of the nation of Japan, and comes as Japan boosts its defense spending to new levels: a record 4.98 trillion yen ($41.97 billion), a 2.8 percent increase from last year’s budget. Critics of the Abe administration, as well as some officials in neighboring nations with all-too-recent memories of Japanese occupation, have argued these moves herald a return to Japanese militarism.

However, the Japanese public isn’t enthusiastic about a more active foreign policy. Six in ten Japanese have consistently opposed changing Article 9 of the Japanese constitution. When asked last summer if they supported Abe’s move to change the interpretation of the constitution to allow for collective self-defense, a similar proportion rejected the move. And a recent survey by the Pew Research Center found that only one in four Japanese thought their nation should play a more active military role in regional affairs.

So how long can Abe keep pushing Japan into a more muscular regional role? Despite the unfavorable polling, Abe will probably have his way with Japanese foreign policy for quite a while longer.

For one, the Japanese opposition is splintered, unable to effectively contest Abe’s agenda. Despite lackluster economic performance in 2014, the opposition Democratic Party of Japan (DPJ) only managed a gain of eleven seats in the December elections, leaving Abe’s LDP in control of the Diet in coalition with Komeito. Nor has the DPJ been able to formulate a coherent opposition to Abe’s military moves.

Abe will also benefit from China’s assertive moves in the region. There is no sign that 2015 will be the year the Chinese back off the regional claims they’ve staked, ranging from their aggressive oil drilling and fishing operations in the region to the ongoing dispute over the Senkaku/Diaoyu Islands. While Japanese polling shows a public that is amenable to negotiations or taking the dispute to an international organization like the International Court of Justice, results from China are more confrontational: nearly two-thirds of Chinese (64 percent) say that, in order to protect the territory, China should strengthen its hold over it. China’s assertions of its territorial claims will give Abe ammunition at home and abroad to justify a stronger role for Japan and the JSDF.

Finally, the United States has its own reasons to encourage a more capable Japanese military. While the U.S. alliance structure in Asia has long been based on an extensive series of bilateral security commitments, such a “hub-and-spoke” system is less robust than the multilateral security arrangements that serve the United States so well in Europe. As the United States begins to draw down on its own military spending, it will need its allies to step up, both with higher budgets and stronger cooperation. The danger, of course, is that a more assertive Japan will prevent the stronger alliance between South Korea and Japan that the United States also needs. Both nations are key elements of the U.S. alliance system and critical to U.S. military operations in the region, but bilateral relations have been poor in recent years due in part to Abe’s own policies. But for the United States, the benefits of a more capable Japanese ally outweigh the potential costs in inter-ally cooperation—for now.

The bottom line: Abe’s more muscular foreign policy is here to stay, supported by his most important ally, encouraged by China's regional assertiveness and enabled by his opposition’s weakness. The Land of the Rising Sun is rising again.

Craig Kafura is a research associate at The Chicago Council on Global Affairs, where he focuses on public opinion and foreign policy. He holds a master’s degree from Columbia University and a bachelor’s from Yale University. The views expressed here are his own. Follow him on Twitter: @ckafura.