Asia's Nightmare Scenario: A War in the East China Sea Over the Senkakus 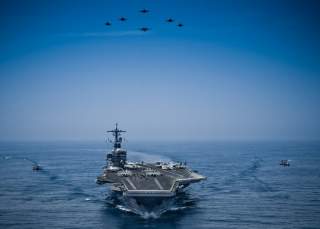 It is clear that an armed clash between Japan and China over the Senkaku/Diaoyu islands is a real possibility.  If that happens Washington would face a very serious choice.  Failing to support Japan militarily would fatally weaken the US-Japan alliance, torpedo President Obama’s ‘Pivot’, and undermine America’s whole position in Asia.  But supporting Japan would mean going to war with China.  Whether that would be wise depends, as much as anything, on how a US-China war over the Senkakus would play out.

Of course no one knows for sure.   There has not been a serious maritime conflict for decades, nor war between two nuclear-armed states so we cannot be sure how the fighting would go.   Nor do we have any real experience of war between nuclear-armed states, so that factor too adds to uncertainty.  But there are some broad judgments that can be offered.  If these judgments seem even moderately likely to be right, the implications for America’s choice about war over the Senkakus are rather sobering.  They suggest that this would be a war that America would not win, could not control, and should not undertake.  And that of course has huge implications for America’s position in Asia.

Suppose that fighting starts between China and Japan with a small armed clash near the islands, in which losses are sustained by both sides.  It is possible this kind of incident could be quickly contained without further fighting, but only if both Tokyo and Beijing acted with tact, forbearance and political courage.  No one would bet on that, so it is at least equally likely that the clash would escalate, and if so Japan would quickly ask America to help.

What happens next if America joins the fight depends first on the strategic aims of each side?  China’s primary aim might be to land forces to take control of the islands, and at the minimum it would want to exclude Japanese and US forces from the air- and sea-space around them.  America’s and Japan’s aims might well look the same.  Tokyo might decide that the time had come to put its control of the islands beyond dispute by stationing forces on them, and at a minimum it would want to prevent further challenges of the kind we have seen recently by excluding Chinese forces from around the islands.

What operational objectives would flow for each side from these strategic aims?  Let us first suppose that each side decides to limit the geographic scope of the conflict to the areas around the disputed islands.  To achieve their primary aims by deploying and sustaining occupation forces on the islands, either side would need to establish a high degree of sea and air control around them. That is likely to prove impossible for either of them: neither China nor the Allies have any serious chance of achieving the sea and air control required to securely deploy and sustain occupation forces on the disputed islands against the other side’s formidable sea and air denial capabilities.  So as long as both sides limit their operations to the area around the islands, neither would be able to take control of the islands by establishing forces on them.

The situation is much less clear when we look at the two side’s minimum aims.  To prevent each other operating near the disputed islands they would only need to impose sea and air denial around them.  Each side could probably deny the waters surrounding the islands to the other’s surface forces. Neither side could prevent the other sustaining a substantial submarine presence there.  But a battle for air superiority over and around the islands might be more evenly balanced.  Allied advantages in quality and perhaps in tactics could be offset by Chinese advantages in numbers and proximity, leading to a protracted and inconclusive air campaign in which losses on both sides would be quite high.

This suggests that as long as operations were limited to the immediate area under contention, the most likely outcome would be an inconclusive stalemate: both sides could deny the waters around the islands to the other’s surface ships, but neither can exclude the other’s submarine and air forces from the disputed area.  It is hard to see how either side would consider this a satisfactory basis to conclude hostilities. Neither would have to improve their position in relation to the islands enough to justify the costs of the fighting. Both would be trapped in an indefinite and costly campaign, especially in the air, with no way to end the conflict.  Quite apart from any other considerations, this would prolong the extraordinary disruption of the conflict to each side’s economy, and convey a message of weakness to each side’s public.

This means both sides would have strong incentives to seek a quicker and more decisive result by broadening the conflict beyond the disputed area itself.  That could happen in several ways.  Some people have suggested that America could prevail in this kind of situation by imposing a distant blockade of China which would bring its highly trade-dependent economy to its knees. Others have suggested that cyber-attacks or attacks on China’s satellites could compel China to back off. Certainly Washington has these options, but so does Beijing. America is just as vulnerable as China to attacks on its sea-borne trade, cyber systems and satellites, and China’s capacity to mount such attacks is quite formidable.  Moreover China may have options to damage America’s economy through its immense holdings of US debt.  This suggests that on balance neither side would see much to gain in opening these kinds of new fronts.

They would therefore be more likely to look for advantage by extending conventional military operations beyond the disputed area itself.  They could try to degrade one another’s air and naval strength around the islands by attacking forces and bases beyond that primary Area of Operations.  This is what America’s Air-Sea Battle concept is all about, of course, but two can play at that game. China has plenty of options to attack US and Japanese forces and bases too.  US and Japanese submarine and precision land-strike forces could certainly sink a lot of Chinese ships and destroy a lot of air bases, but Chinese short- and medium- range ballistic missiles could likewise do a lot of damage to US and Japanese bases, and China too could sink a lot of allied ships.

So again it is hard to see how one side or the other could win a decisive advantage this way.  That means further escalation might then seem the only way to achieve acceptable strategic outcomes for both sides.  But neither side has escalation dominance: any step by one side can be matched by the other.  Both sides might nonetheless be impelled to escalate further because the cost of relinquishing their strategic objectives will have increased as the scale and cost of the conflict has grown.  The longer and more bitter the fight becomes, the harder it becomes to step back, and the more dangerous each step forward becomes.

At the top of this ladder of escalation looms the possibility of an intercontinental nuclear exchange, which would, or at least should, weigh heavily on both side’s calculations right from the start. During the Cold War, the possibility of a large-scale nuclear exchange affected the calculations of the superpowers whenever there was a risk of even the smallest-scale skirmishes between their forces.  That was because each superpower recognized how hard it would be to contain an escalating conflict before it reached the nuclear level, because they both saw the danger that neither of them would back down and accept defeat even to avoid a nuclear exchange.  War was avoided because both sides understood that their opponents were as grimly resolved as they were.

Can we say the same of America and China today?  There has perhaps been a tendency among American strategists to overlook the importance of the nuclear dimension of any US-China conflict.  They underestimate the significance of China’s nuclear forces because they are so much smaller than the Soviet’s were during the Cold War, or than America’s are today.  But that does not make negligible.  They can still destroy American cities, and kill millions of Americans, and it would be a desperate gamble to try to destroy them with a disarming first strike.  That means we have to pay a lot of attention to the question of China’s resolve.

China of course faces huge risks from America’s much greater forces, but its strategists may well calculate that on balance the nuclear factor favors China, because it plays to what they may see as China’s decisive advantage over the US in an East China Sea scenario: the balance of resolve.  Let me explain. When two adversaries are relatively evenly balanced in their ability to hurt one another, the advantages lies with the one with greater resolve.  More precisely, in the contest of wills that drives any escalating conflict, the advantage lies with the side that can persuade its opponent that it has the greater resolve, and will thus not step back and accept defeat before the escalating conflict has cost the other side more than it is willing to pay.  If one side is confident that the other believes it has more resolve, that side will be confident that the other will back off first, and will thus be more willing to enter a conflict, and more willing to escalate it.