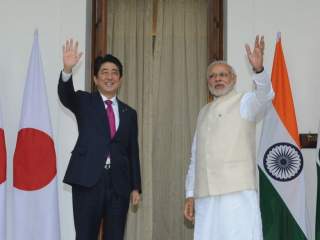 India and Japan are drawing closer to each other. Senior representatives of both governments have praised each other at high-level visits and have signed a remarkable number of security, trade and investment agreements in a relatively short time. Doubtless, this embrace has its origins in China’s provocative—some might say aggressive—behavior. But, having drawn together for security reasons, the two countries now realize how closer relations will also bring powerful economic and investment advantages. There are, of course, limits to how intertwined India and Japan can become, but the mutual advantages—diplomatic, military, economic and financial—certainly invite an extension of the recent trend.

At the same time, the decline in America’s diplomatic and military profile has intensified Indian and Japanese anxieties. Washington, of course, has spoken endlessly of its “Asia pivot,” which both Japan and India would welcome if it had substance, but there is little sign of that so far. Though the United States possesses overwhelming naval superiority, with a fleet of more than one hundred large surface ships, it is also clear that Washington’s huge obligations elsewhere in the world limit how many of those ships it could commit to Asia at any one time. Comparative trends in naval power have added to the unease. The U.S. fleet has shrunk by more than half since 1990, when it possessed 230 large surface vessels, and seems poised to shrink further. In this turbulent security environment, India and Japan have much to offer each other. Even a loose cooperation between these two countries would blunt Beijing’s military advantage, since Beijing, in confronting one, would have to hold military resources back to cover the possibility of trouble with the other.

China has tailored its recent actions to raise anxieties throughout Asia. Its army has repeatedly challenged India in the Himalayas, while its navy has behaved in a high-handed way in the Indian Ocean, and still more so in the East and South China Seas. Beijing has issued the usual raft of diplomatic equivocations, stating, for instance, that the construction of air fields on disputed islands should trouble no one, that such structures have no aggressive intent but are merely an effort by the People’s Liberation Army to improve working conditions for the rescue workers stationed there.

Strains between China and India are, of course, long-standing. The two countries fought a brief but bitter war along their common Himalayan border in 1962. Though no major action has taken place since, Beijing steadfastly refuses to reach a permanent border settlement and constantly tests the mechanisms put into place to stop small incidents from escalating. New Delhi counts no fewer than six hundred incursions by Chinese troops during the last three years and complains of sometimes lengthy Chinese deployments in Pakistan and, particularly sensitive, in the Pakistan-administered parts of Kashmir. India’s navy counts twenty-two troubling Indian Ocean encounters with Chinese submarines in a recent twelve-month span. Nor does it help that China has been caught stealing classified documents from India’s Eastern Naval Command, that rumors have surfaced about the construction of a Chinese submarine base in the Maldives or that China is developing port facilities in Pakistan, Sri Lanka, Bangladesh and Myanmar. “Everywhere around us, we see an eighteenth-century expansionist mind-set,” Indian prime minister Narendra Modi said in a recent speech. It was understood he was talking about China.

Japan’s Chinese anxieties are of more recent vintage but are no less intense. There is the dispute over the East China Sea islands that the Japanese call the Senkakus and the Chinese call the Diaoyus. Both countries claim them, both from time to time have behaved in provocative ways and both have confronted the other’s naval power around the islands. But if these events dominate the headlines, they are hardly the whole story. In recent years, Chinese warships have navigated unsettlingly close to Japanese shores, including in the Osumi Strait in Japan’s south and the Soya Strait in its north. At least one Chinese nuclear submarine has been recorded in Japanese territorial waters. In the air, Tokyo scrambled its fighter jets against Chinese aircraft in or near Japanese airspace 464 times in the latest annual count and 415 times in the year prior; that number was less than fifty for most years in the decade before 2010. In November 2013, China announced its Air Defense Identification Zone (ADIZ) over the East China Sea. Only a month later, Beijing had mobilized eighty-seven reconnaissance and early-warning aircraft—fighters, too—to the ADIZ’s airspace. All of this is an effort to control sea and air traffic across much of the South and East China Seas. Under what Beijing refers to as “nine-dashed line,” it has all but claimed sovereignty over 90 percent of the South China Sea. Recent remarks by the commander of the U.S. Pacific Fleet captured the common view in Tokyo well: “When one looks at China’s pattern of provocative actions,” he said, “serious questions about Chinese intentions [arise].”

Behind this aggressiveness, and no doubt making it that much more unsettling to New Delhi and Tokyo, is Beijing’s impressive military upgrade. Japan’s ministry of defense points out that China’s defense budget has grown forty-fold over the past quarter century and three-and-a-half fold in just the last ten years. Neither Japan nor India has kept pace. China’s air force is now twice the size of India’s. Though at the turn of the century, India and China had rough naval parity, today China’s navy can deploy some forty large surface ships against India’s twenty-three. Though Japan still has rough naval parity with China, with thirty-nine large surface ships, it is well aware that in 2000, it had twice China’s number. It only adds to Tokyo’s and New Delhi’s feelings of vulnerability that Taiwan’s fleet has also shrunk during this time from thirty-two to twenty-five large vessels. The Times of India reports that Beijing needs only two days to mobilize on the Chinese-Indian border, while New Delhi, hampered by a lack of transport infrastructure of all sorts, would require at least a week to do so. As well, in thirty days China could place thirty divisions, about 450,000 troops, at the border, three times what India could muster in a much longer time frame.

Compounding Asian uneasiness is China’s historic tendency to take advantage of any withdrawal or relaxation by a major power. As Satoru Nagao of Gakushuin University in Tokyo has noted, it was after the United States withdrew from Vietnam in the mid-1970s that Beijing occupied the Paracel Islands; after Russia withdrew from Vietnam that Beijing moved on the Spratly Islands in 1988; and after the United States left the Subic Bay base in the Philippines in 1992 that Beijing occupied Mischief Reef, which both Vietnam and the Philippines claim. To be sure, this simple listing of actions and their timing can hardly substitute for a thorough analysis of Asia’s evolving power balance, but it is indicative and surely reflects the feeling in Tokyo, New Delhi and elsewhere in Asia, especially as the United States ceases to project the high diplomatic and military profile it once did.

Closer cooperation between these two powerful countries astride China would go a long way in neutralizing any aggressive moves Beijing might wish to make in the region. Implicitly acknowledging this potential, India has already begun to fill the geographic gap between it and Japan by offering military support throughout Southeast Asia. Prime Minister Modi recently spoke of his intention to turn the “Look East” policy begun in the 1990s into an “Act East” policy. So far, New Delhi has arranged for Indian armed forces to train Thai, Vietnamese, Malaysian and Indonesian military personnel, including fighter pilots and submarine crews. Meanwhile, Singapore is using Indian military bases for its own training. Matters have gone far enough on this front to draw a threatening response from Beijing. China’s Communist Party-run Global Times has pointedly warned India that it improves ties with Japan “at its own peril,” publishing an article shortly after a meeting between the two nation’s prime ministers stating that strategic cooperation with Japan “can only bring trouble to India.”

Formal agreements between Tokyo and New Delhi have stressed both ideological and material support for security cooperation. Their 2006 Strategic and Global Partnership Agreement and their 2008 Joint Declaration on Security Cooperation both emphasize how the two countries stand as Asia’s major proponents of “democracy, open society, human rights, and the rule of law.” They acknowledge a “common interest in the safety of sea lines of communications,” and, not insignificantly, a common desire to “reform the United Nations, including the expansion of [its] Security Council.” They also itemize specific ways in which each will support the other, including arrangements for regularly scheduled port calls, joint exercises and naval and coast- guard exchanges, as well as sharing technical expertise. In clear recognition of Japan’s technological advantages, as well as the opportunity opened by Japan’s not-coincidental decision to ease its rules on weapons exports, India has taken steps to purchase Japan’s Soryu-class diesel-electric submarines. India’s navy already possesses fifteen submarines but acknowledges that Japan’s product is far superior. India’s navy has made further plans to buy twelve Japanese-designed, Japanese-built US-2 amphibious search-and-rescue planes. Cooperation has gone so far that the two countries are exploring ways to manufacture the planes jointly.