Assad's Victory in Syria Has Cost Him Control of the Country 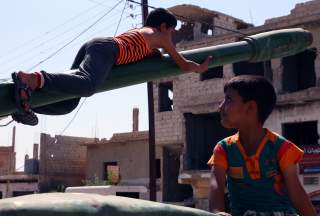 Four years ago, with Syrian government forces stretched increasingly thin and rebel fighters assaulting some of the regime’s most precious and strategic areas, it seemed as if it was only a matter of time before Bashar al-Assad and his extended family were driven into exile. As the violence began creeping closer and closer to Damascus, and as rebel units started launching mortars into the heart of the capital city, rumors abounded about Assad’s fate. A Saudi daily at the time reported that Assad was getting so concerned about the safety of himself and his family that he decided that being surrounded by Russian military personnel on a Russian warship off the coast of Latakia province was a better place to live than in the presidential palace. For many in Washington who were opining for a more aggressive U.S. policy in Syria, it looked like there was finally a bright light at the end of the tunnel—give the opposition a few more months, and the Syrian dictator would be coerced into leaving.

Of course, none of that happened. Assad’s army, while weak and suffering from extensive attrition, casualties and desertion, was resilient enough at its core (fellow Alawite officers remained loyal to the regime throughout) to defend Damascus and provincial capitals across the country. Raqqa, Idlib and Deir ez-Zor would fall out of government control, but those cities were not particularly important for the Assad regime’s survival; they were far enough away from the territory Assad needed to struggle along, so each could be contained and sporadically bombed by Syrian aircraft. Today, Damascus is on the cusp of retaking Deir ez-Zor as pro-government forces tighten a siege on Islamic State militants who have held most of the city for years. Raqqa, in the meantime, is literally being blown to bits as U.S. coalition aircraft and the Syrian Democratic Forces clear out the remaining ISIS presence in that city.

As for everywhere else, Assad is either winning the war, has already won it, or is engaging in what can be charitably called as a half-hearted quarantine of jihadist rebel units now holed up in the misery that is the Idlib Province. Syrian troops and Shia militia allies from Iran, Afghanistan and Pakistan are cleverly signing Russian-sponsored de-escalation agreements to decrease the fighting in some parts of the country, only to launch offensive operations in those very areas when the opportunity arises. Aleppo, Syria’s crown jewel of cultural, historical and intellectual talent, is a mound of broken glass, concrete, dust, ash, limbs and decomposed bodies. Latakia, the regime’s support base, is no longer within range of sporadic and organized rebel attacks. Opposition cantons in Homs have been emptied of civilians and fighters alike in one of the many forced evacuations that the Syrian government has compelled their armed opponents to sign.

What we in Washington, London and Riyadh like to call the nonextremist or moderate opposition holds a fraction of the strength and prowess it once had. Many have been killed by the regime, the Russians and the Iranians. Some have been detained, tortured or executed in Syria’s secretive, brutal system of prisons and interrogation centers. Others have been co-opted by jihadist elements, forced to either surrender their weapons, join their ranks, or be mercilessly killed. What optimistic westerners earlier in the conflict liked to call the Free Syrian Army has been so ineffectual on the battlefield that President Donald Trump decided to end the CIA assistance program. After all, what’s the point of shoveling millions of dollars in U.S. taxpayer money to the moderate opposition’s coffers if the people receiving the guns and ammunition are too weak to defend the little influence that they have?

It’s hard to swallow, but Assad has won the war. The mass bombing of civilians, the leveling of hospitals and clinics, the destruction of schools, the starving of civilians, and the gassing of children—everything that we in the United States and Europe correctly gasp at horrific evidence of war crimes and crimes against humanity—are the very same techniques that assisted the regime in clawing back territory. When adding Russia and Iran’s absolute terror in losing a strategic beachhead in the Middle East; Assad’s exploitation of that fear; and Assad’s conniving attempt to poison the democratic character of the rebellion by releasing terrorists back on the streets, and you produce the situation that Syria is experiencing today.

Assad’s victory, however, comes at a tremendous cost to Syria as a nation and Syrians as a people.

Not only have hundreds of thousands of people been killed by their own government, but millions have been forced to leave their homes or their country for refugee camps in Jordan, Turkey, Lebanon and Europe. Syria’s dictator has also done something more elemental than this; in order to save his own skin and maintain the regime his father constructed decades prior, Assad has sacrificed Syria’s reputation as a country that is stubbornly defensive about its independence and sovereignty. He has transformed Syria from a sovereign nation that was once an important player in the chessboard of Middle East geopolitics and diplomacy into a fake nation-state with wide-open borders that has more holes in it than Swiss cheese. Syria is now a place where foreign powers like Russia and Iran negotiate ceasefires and de-escalation accords on the Syrian government’s behalf, as if Syrian political leaders are useless proxies who will do what Moscow and Tehran tell them to do. Indeed, the Iranian Revolutionary Guard Corps and the Russian military—not the Syrian army or the Syrian political class—are managing Syria’s destiny. Assad’s total dependency on Iranian intelligence officers, Hezbollah shock troops, Shia militias, criminal gangs and Russian pilots and advisers for Syria’s survival means that Assad is nothing but a pawn at the mercy of its protectors.

So, congratulations Bashar. The international community will have to look at your face for years into the future. But don’t misrepresent what you did in order to keep the presidency. You are now one of the biggest heads-of-state in the world, lording over a dysfunctional quasi-state whose cities resemble the carnage of Dresden or Tokyo circa 1945. Your country’s economy has lost so much revenue and its society has lost so many intellectual, dynamic and productive citizens from a brain-drain that it will not be able to recover from for generations to come.