Atomic Advantage: Is Iran Stalling for Time in Negotiations over Its Nuclear Program? 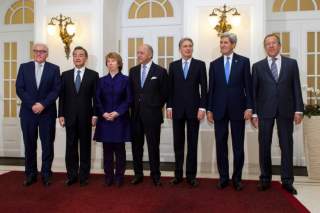 Despite an extended period of intensive diplomacy, the P5+1 and Iran failed to reach a permanent agreement last month in Vienna limiting Iran’s civilian nuclear program in exchange for comprehensive sanctions relief.  Instead, the two sides agreed to roll over an interim agreement in effect since January for another seven months, setting July 2015 as a new deadline for a final deal.

Skeptics of diplomacy have asserted this interim agreement, more formally known as the Joint Plan of Action (JPOA), only provides the illusion of freezing Iran’s nuclear program in place.  These critics contend the agreement instead permits continued Iranian enrichment, including related research and development activities, thus allowing Tehran to move forward with key aspects of its nuclear program.  Unfortunately, this analysis distorts the purpose and substance of the JPOA while more broadly misinterpreting what diplomacy can and cannot achieve.

It’s important to recall the original premise of an interim agreement with Iran.  As articulated by senior P5+1 officials going back to 2009, the intention was to essentially “stop the clock” for both sides while they negotiate a more durable permanent agreement.   So long as the two sides are engaged in serious talks, Iran should not advance the capabilities of its nuclear program nor should the international community ratchet up sanctions on the Iranian economy.  In fact, this is precisely what has happened since last November, when the JPOA was initially negotiated.

Under the JPOA, Iran continues enrichment at both its Natanz and Fordow facilities under daily monitoring by IAEA officials, albeit only at the 3.5 percent level and under an overall cap on the level of accumulated enriched uranium.  Because Iran agreed to only use centrifuges already installed and operating as of last November, it is not accruing any new knowledge or expertise.  Iran is permitted to continue research and development on new, more powerful centrifuge models that could dramatically shrink the time needed for a future breakout.  However, the JPOA stipulated that Iran could only continue “current enrichment R&D practices”, e.g. those activities already conducted as of November 2013, and it could not accumulate enriched uranium through these activities.

So what does this mean in actual practice?  As of last November, Iran was conducting work on five different centrifuge models at its R&D facility (co-located at Natanz).  As further fleshed out by a technical annex between Iran and the P5+1, the JPOA ensures that Iran cannot go beyond the activities it was already conducting for each centrifuge model, which in most cases consisted of feeding uranium gas into a stand alone spinning centrifuge.  Critics who assert that such basic and limited R&D activity helps Iran materially advance its enrichment program are mistaken.  As the history of Iran’s own enrichment program since 2005 demonstrates, production-scale enrichment in an operational setting is an essential requirement to develop genuine confidence in any given centrifuge model.  As of last November, such confidence existed for only one centrifuge model – the IR-1.  This model is technologically outmoded and highly inefficient, which is why Iran desperately wants to introduce more advanced centrifuges.

But injecting natural uranium into a stand-alone centrifuge, or conducting limited spinning in a cascade of several units, in an R&D setting provides limited insights into the performance of a new centrifuge model.  Only once hundreds of such centrifuges are linked up in an operational cascade formation and then spun over a continuous and extended period can one form an assessment about whether such centrifuges work as intended or require further tweaks.  It is precisely for that reason why the JPOA restriction preventing Iran from initiating operation of the approximately 1000 IR-2m centrifuges at Natanz -- and installing additional units -- was so valuable.  Absent this restriction, Iran likely today would have sufficient confidence in the IR-2m model (which is three to four times more efficient than the IR-1) such that it could begin swapping out older IR-1 centrifuges and significantly increasing its future breakout capability.

The additional restrictions Iran has accepted under the seven month extension of the interim agreement will further ensure that it cannot advance its nuclear program while talks continue.  (Why the P5+1 has chosen to share these new terms of the extension agreement on a close-hold basis is a bit puzzling, especially as members of the U.S. Congress loudly and incorrectly claim that only Iran has received new concessions as part of the extension.)  Not only has Iran clarified those R&D practices it will not pursue, it has also agreed to new “snap inspections” by the IAEA for centrifuge production facilities and to convert an additional quantity of 20 percent enriched uranium now in oxide form into fuel assemblies, further ensuring this enriched uranium can never be used for weapons purposes.

A comprehensive and permanent agreement with Iran remains essential for the international community to have confidence that Tehran cannot quickly break out to produce a nuclear weapon, either in overt or covert fashion.  However, it is disingenuous to claim that Iran is simply biding for time and using diplomatic talks as a cover for advancing its nuclear program.  For the first time in a decade, the JPOA has imposed genuine constraints on Iran’s ability to advance its enrichment program; as Secretary of State Kerry has declared, “the world is safer than it was just one year ago.”  That is an accomplishment worth applauding and building upon in the coming months.

Jofi Joseph worked on U.S. policy towards Iran’s nuclear program at the White House as a Director for Nonproliferation on the National Security Council staff from 2011 to 2013.