Atomic Anxieties: Tough Choices Ahead When It Comes to America's Nukes 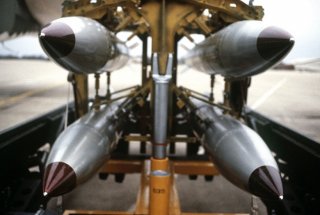 The easy years of being a nuclear power are over. Late last week, Secretary of Defense Chuck Hagel announced the results of two reviews of the Department of Defense’s nuclear-weapons enterprise. The reviews found major deficiencies in leadership, manpower, unit morale and equipment—problems endemic to a nuclear force at a pivotal moment. The usual partisan answers will not suffice for the next decades: the country must take a candid look at its nuclear forces and make some very hard choices. Most importantly, the Obama administration must prove that its basic bargain—a safe, secure, effective and declining arsenal—is possible.

The external review paints a picture of a nuclear force that is failed by its leadership. Military personnel had been working overtime to accomplish their mission, despite major manpower shortfalls and that their exertion “disguises the longer-term consequences of shortfalls.” The leadership has failed to “take ownership” of the nuclear mission and, threatened by successive scandals and lapses, has responded by burdening nuclear forces with excessive inspection requirements that have distracted nuclear operators from their strategic mission.

To claim that the problems in the nuclear enterprise result from U.S. nuclear posture or a lack of appreciation is badly mistaken. The Obama administration has been adamant that “nuclear forces will continue to play an essential role in deterring potential adversaries.” Congressional Republicans who claim that the president’s arms-control agenda has led to decreased nuclear funding are dead wrong. In fact, the administration has repeatedly requested unprecedented sums for nuclear sustainment and modernization, but it is Congress that has sometimes failed to meet the requests.

And yet, the administration has clearly recognized that national security does not depend on nuclear force as it did during the Cold War. The Pentagon has declared that one third of the U.S. nuclear arsenal is in excess of strategic requirements and that it is in the U.S. interest to reduce reliance on the nuclear arsenal. “We may no longer live in fear of global annihilation,” Obama told a crowd in Berlin last year, “but so long as nuclear weapons exist, we are not truly safe.”

How can a nuclear arsenal remain safe, secure and effective as it declines in relevance and in size? The solution is not to inflate the importance of nuclear weapons to the security of the United States, as Secretary Hagel did Friday when he told reporters that nuclear deterrence is “DOD’s highest priority mission.” And the solution is certainly not to renege on the American commitment to nuclear disarmament that has anchored the Non-Proliferation Treaty for nearly half a century. Serious problems in the management and operation of nuclear weapons are not an argument to increase their number or their role in U.S. national security, and they are not an argument for building expensive new delivery vehicles that are in excess of military requirements.

Instead, the administration should expand on its repeated insistence that as long as nuclear weapons exist, the United States will maintain a safe, secure and effective nuclear arsenal. As the U.S. nuclear arsenal declines in size and relevance, it is more critical than ever that each part of the nuclear enterprise be accomplished with prudence, precision and foresight. This includes how the arsenal is funded.

Congress must realize that funding the nuclear enterprise will become more far more difficult, but far more important. Recent analyses have estimated the cost of the nuclear enterprise at around $1 trillion in the next thirty years. That’s not just a little pricey—that’s wildly overblown. A major independent review of national defense recently concluded that these spending figures are “unaffordable.” Yet recent weeks have seen this price tag expand rather than shrink. Secretary Hagel’s announcement on Friday was a concession that the nuclear arsenal is more expensive to maintain than was previously understood; the plans to rectify the shortfall will add at least $7.5 billion to the defense budget in the next five years. At the same time, the Air Force is moving toward building a new intercontinental ballistic missile (ICBM) rather than a cheaper option that would refurbish the existing Minuteman III missiles and silos.

Friday’s announcement will be upsetting for all sides of the debate on nuclear issues. Arms controllers will say that Secretary Hagel is wastefully throwing good money after bad. Congressional Republicans will say that failures in the nuclear enterprise are evidence that nuclear spending must increase and that further arms control will only exacerbate the problem. In fact, neither position appreciates the reality of the situation: the U.S. nuclear arsenal is less relevant now than during the Cold War; the current nuclear-spending plans are unaffordable and will need to be cut back; and deep reductions in nuclear forces are only possible if the nuclear enterprise is safe and secure. The Obama administration should assertively cut the spending plans for nuclear forces. It must take a considered look at how the next nuclear arsenal can meet strategic requirements in an affordable way so that future nuclear strategy is not set by Congressional infighting over cost overruns on nuclear systems. The goal should be to pare back unnecessary spending plans (like an all-new ICBM) and tell Congress that it is reinvesting a portion of the savings in the manpower, tools and equipment necessary to ensure that nuclear operators can do their jobs.

As the arsenal declines in size, it will be important to ensure that each system maintains its expected alert condition, that each submarine can accomplish its patrols and that planners retain confidence in each warhead type. A smaller arsenal is strategically and fiscally desirable, but is only possible if each of its components functions to standard. The Secretary’s plan has the high-level attention and funding necessary to make an impact on the nuclear enterprise, but the new funding must occur in the context of declining nuclear budgets.

Only a small portion of U.S. military forces are ever at the spear’s edge—many in the military serve with distinction to operate systems that are rarely used, to support their deployed colleagues and to defend facilities and bases that are not under immediate threat. Yet the men and women that operate and safeguard the U.S. nuclear arsenal are stewards of a uniquely dangerous weapon, which exists so that it may never be used. Meeting the high standards of nuclear operations will continue to be a struggle, but it is a struggle that has to be fought. Neither they, nor the Pentagon, nor the U.S. Congress benefit from hollow declarations about the military importance of nuclear weapons. The administration must prove to each that the nuclear enterprise increases in importance as numbers, reliance and funding decline to meet the imperatives of the post–Cold War world.

Adam Mount is a Stanton Nuclear Security Fellow at the Council on Foreign Relations.