Is the Australian Economic Miracle Coming to an End? 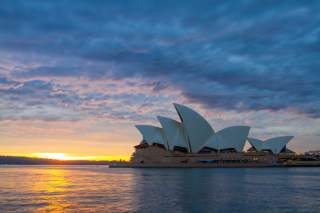 Australia has been rated a high risk of slumping into recession, with commodity prices diving, public finances deteriorating and unemployment rising. After a record twenty-four straight years of economic expansion, has the lucky country’s luck finally run out?

From having at one point a stronger currency and lower unemployment rate than the United States, the tables have rapidly turned for the land “Down Under” following the end of the China-driven mining boom.

Analysts have put the chances of a recession in the world’s twelfth-largest economy at as high as 50 percent, hit by a downturn in the nation’s largest trading partner, China, which has slashed prices of key exports such as coal and iron ore.

Strategist Gerard Minack, “a well-known bear,” told the Sydney Morning Herald in March that the bursting of a housing bubble would mark the end of the good times for Australia.

"There's a 25 to 33 percent chance of a recession in the next 12 to 18 months," Minack said, with only "okay" employment data preventing him from calling a recession “outright.”

Goldman Sachs chief economist Tim Toohey reportedly agreed, predicting a one-in-three chance of recession in 2016. Bank of America Merrill Lynch chief economist Saul Eslake put the odds at “below 25 percent,” saying it would be the “first one that was not preceded by tight monetary policy.”

Already, the resource-rich state of Queensland has revealed that it fell into recession in 2014 for only the third time in the past thirty years, hit by lower prices of coal and other commodities. Its iron ore-rich counterpart, Western Australia, has seen growth slump to just two percent in fiscal 2016, its lowest rate since the recession of 1990.

On May 12, Australian Treasurer Joe Hockey told the nation the cupboard was bare, with previous hopes of a fiscal surplus pushed back to the end of the decade and likely even later. From a projected budget surplus of four billion Australian dollars by 2017, the government now expects a deficit of A$35 billion in the coming fiscal year and another A$26 billion a year later, while the jobless rate is seen climbing to 6.5 percent.

Hockey blamed drought, the “largest fall in our terms of trade in half a century” and a weaker than expected global recovery for wiping out A$90 billion in forecast government revenue.

Describing it as a “soft, cuddlier budget,” ANZ Research noted that structural reforms had been postponed, with any further economic deterioration likely to leave government finances stuck in the red for some time.

The Australian Financial Review’s Christopher Joye was harsher, saying the nation “faces its biggest fiscal challenge in 60 years and does not deserve an AAA credit rating.”

According to Joye, since the budget’s underlying cash balance fell into the red in fiscal 2009, the cumulative shortfall between the government’s revenue and spending has blown out to nearly twenty percent of gross domestic product (GDP).

Joye pointed to a blowout in household debt, which now exceeds 150 percent, despite the lowest interest rates on record, with much of it consumed by rising housing prices in the major cities of Sydney and Melbourne. Yet with the housing market already overvalued by an estimated twenty percent, fiscal and monetary policy options “all but completely spent,” Joye said there few options left to combat a real downturn.

“The rating agencies are smoking dope if they think Australia is a better ‘credit’ today than it was in the 1980s and 1990s,” he said.

On May 5, the Reserve Bank of Australia cut the official cash rate to a record low of two percent, citing weak business and public investment. In its meeting minutes, the central bank said it could consider another cut should the economy weaken further, with the hoped for surge in housing investment lacking outside Sydney and Melbourne and a weak Chinese economy weighing on the commodities sector.

Hockey’s budget forecasts predicted real GDP growth of 2.75 percent in fiscal year 2016, rising to 3.25 percent the following year and 3.5 percent thereafter. But with the forecasts relying on heavily indebted consumers spending more, the resource sector struggling to recover and the national currency remaining stubbornly high, others are less optimistic.

“If Australia does suffer a recession in the next few years it will most likely begin in one of three areas: the property market, our major banks or our mining sector. If I was a betting man I’d put my money on either the property market or the mining sector, with the financial sector suffering a second-order shock,” according to Business Spectator columnist Callam Pickering.

Amid claims that Australia’s housing market resembles “a giant Lehman Brothers,” analysts say the economy would be lucky indeed to continue its winning run through to the end of the decade.