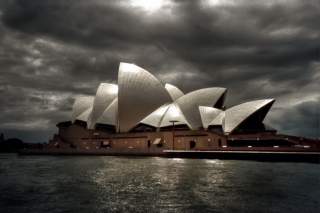 Still, Australia has a refugee crisis. The difference is that the crisis in Australia is over the treatment of the few refugees who actually attempt a crossing, not over the integration of the handful of asylum seekers who actually make it. These days boat arrivals in Australia are as scarce as Tasmanian tigers.

It wasn't always this way. Between 2009 and 2013 Australia faced a deluge of refugees arriving by boat from Indonesia, Sri Lanka, Bangladesh, and Myanmar. The wave crested in 2013 with more than 20,000 unauthorized arrivals on 300 boats.

In 2013 Tony Abbott's Liberal Party (Australia's conservatives) came to power on a pledge to "stop the boats" -- and did just that. Tony Abbott has since been replaced as prime minister by fellow Liberal Malcolm Turnbull, but the policy remains the same. Refugees simply are not allowed to arrive in Australia by boat.

Which is not to say that they don't try. In November 2015, a refugee boat got within shouting distance of the Australian Indian Ocean territory of Christmas Island, and in May 2016, a dozen Sri Lankans almost made it to the remote Australian-administered Cocos Islands.

Both attempted landings were foiled by the Australian Navy under its Operation Sovereign Borders, a program ordered by the Liberal government immediately upon taking office in September 2013.

Under this program, refugee boats approaching Australian territory are towed back to sea. If the boats are unseaworthy, the asylum-seekers are transferred to lifeboats, which are then towed to the edges of Indonesian territorial waters and let go. These operations are shrouded in military operational secrecy but enough details have leaked to paint a clear picture of what is going on.

There is no doubt that Australia's "stop the boats" strategy has (mostly) stopped the boats -- and that it has saved thousands of people from drowning in the attempt to reach Australia by boat. The number of lives saved is almost certainly larger than the reduction in deaths actually recorded because boat arrivals were spiraling out of control in 2012-2013 and deaths would likely have risen as well.

On this count the Australian experience must be judged against German Chancellor Angela Merkel's disastrous 2015 open invitation to refugees to cross the Mediterranean into Europe, which has led to thousands of deaths by drowning with no end in sight.

Australia has staunched the loss of life, but at a cost. The Australian government's pledge that, "No refugee who arrives by boat will ever be settled in Australia" -- a legacy of the previous Labor administration that has been reaffirmed by the current Liberal administration -- has severely strained Australia's relations with neighboring countries and has proven extraordinarily expensive.

Most of the boats that approach Australia's shores set sail from Indonesia. They're not carrying Indonesians, but the people smugglers operate from obscure Indonesian fishing villages. Australia's aggressive turn-back policy has effectively transformed Indonesia into a kind of refugee purgatory, an outcome that is not appreciated by the Indonesian government.

One of the most controversial aspects of Australia's turn-back policy is the allegation that the Australian Department of Immigration and Border Protection actually pays people smugglers to return their human cargos to Indonesia. As part of the secrecy surrounding Operation Sovereign Borders, the Australian government neither confirms nor denies such reports.

A much more visible dispute has boiled over with the government of Papua New Guinea, the poor Pacific country that hosts Australia's Manus Island immigration detention center. Since 2012 many asylum seekers who ended up in Australian custody have been transferred there. The Australian government has paid Papua New Guinea hundreds of millions of dollars to take them in.

But in April 2016, the government of Papua New Guinea ordered the closure of the Manus Island detention center following an adverse ruling from its own supreme court. The court ruled that the camp violated principles of freedom enshrined in the Papuan constitution.

Exactly when the camp will close is anyone's guess, though the Australian government has confirmed that it will ultimately close the camp. Meanwhile international criticism regarding the conditions of detention there continues to mount.

Further afield on the remote Pacific island of Nauru, Australia operates an immigration detention center that is drawing increasing condemnation for poor conditions, especially for children held at the camp. There are no plans to close the Nauru detention center, which has cost the Australian government more than a billion dollars to date.

Fewer than a thousand people are held at each of Manus Island and Nauru detention centers.

The Australian government also operates its own riot-prone immigration detention center on Christmas Island, where a few hundred inmates are reportedly (though unverifiably) held in cages reminiscent of the early days of Guantanamo Bay.

Before the inauguration of Operation Sovereign Borders in 2013, Australia's policy of turning back boats and holding asylum-seekers in offshore immigration detention centers went by the all too Nazi-sounding name "The Pacific Solution."

That tone-deaf label betrays some unfortunate realities behind Australia's success in limiting illegal boat arrivals. Australia is not a fascist country, but when it comes to refugees it sometimes behaves like one. Perhaps most embarrassing is Australia's treatment of its own government workers.

Australia does not have America's constitutional guarantees of free speech and a free press. In Australia, immigration workers can be jailed for merely talking to the government's own national news service, even if no official secrets are revealed. Such anti-terror style secrecy is not appropriate when it comes to handling what is in the end a civil law enforcement issue.

In the 2000s the United States had a soul-searching national debate over the treatment of enemy combatants held in Guantanamo Bay and elsewhere -- people who were arrested in the war on terror but not necessarily convicted of any crime. Australia's immigration detainees, by contrast, are guilty of no crime except the desire to seek refuge in Australia.

Refugees can be denied asylum if they are found not to have solid claims, but they shouldn't be coerced into giving up their claims by being held in miserable conditions until they agree to go home.

When it comes to managing refugee flows, stopping the boats is the right policy. But it is only a first step. A free country must defend its borders, but it must also defend its freedoms. Here Australia could learn a thing or two from the United States. Refugees must be managed, but they shouldn't be punished.