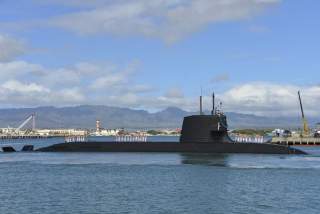 Recently various Australian news outlets announced the country would turn to Japan for a new generation of attack submarines.

Australia, which has been saddled for nearly two decades with the advanced—yet unreliable—Collins class attack submarines will buy Japanese Soryu class diesel submarines to replace them.

The decision will send shock waves through both countries. For Australia, it will mean giving up—at least temporarily—on an indigenous submarine industry and thousands of jobs in return for a modern, reliable submarine force. For Japan it will be even more of a landmark event: the sale of Japanese-built submarines abroad will be the largest export of arms abroad in seventy years and symbolic of the new direction Prime Minister Shinzo Abe is taking Japan.

In 1987, the Australian government, local Australian shipbuilding and the Swedish submarine builder Kockums agreed to build six Collins-class submarines for $500 million dollars each— $1.2 billion in current dollars. In order for the submarines to conduct patrols in the western Pacific, the 3,500 ton submarines would be capable of long distance cruises of about 22,000 kilometers.

HMAS Collins, the lead submarine of her class, was laid down in 1990 but didn’t enter service until 1998. All six submarines took an average of 7 1/2 years to complete. The fleet has suffered from a variety of problems, including buggy control software, hydrodynamic flow problems, cracked propellers, seal troubles and vibration issues. In contrast, the 102,000 ton American aircraft carrier USS Bush took six years to build and enter service.

By 2009 Australia was already looking to replace the six Collins subs with a dozen replacements from the Future Submarine Program. Sky-high cost estimates pegged the new submarine program at anywhere from $50 to $80 billion dollars. That, combined with more than two decades’ frustration in getting the Collins class to combat readiness, made producing another round of locally-built submarines unappealing.

At the same time, the government of Prime Minister Shinzo Abe has relaxed the Japanese government’s “Three Principles on Arms Exports” to allow sales of military equipment to friendly countries. The previous ban amounted to a de facto ban on all arms sales, and aside from small arms ammunition manufactured in the 1950s and a handful of small patrol ships built for Asian countries, Japan has not exported weapons since the end of World War II.

Japan’s Soryu-class submarines are some of the most advanced diesel-electric submarines in the world. At 4,200 tons, Soryus are twenty percent larger than the Collins class. Both submarines have six 533mm torpedo tubes, capable of firing both guided torpedoes and anti-ship missiles. The Soryu class has four Air Independent Propulsion (AIP) units that allow prolonged travel while submerged—the latest production submarines are capable of traveling underwater for up to two weeks without resurfacing.

Several factors seem to have swayed Australia from domestic production. The failure of the Collins design and the Australian Shipbuilding Corporation (ASC), which built the Collins and would be in charge of future submarine production, is foremost. Lingering issues have kept the Collins’ problems fresh in the minds of politicians and the public: between October 2009 and February 2010, not a single Collins submarine was available for deployment. ASC is also currently in the news with another troubled shipbuilding project, the Air Warfare Destroyer program, which is at least $500 million over budget.

The maturity of the Soryu’s design was likely another consideration. The Soryu class is actually based upon the earlier Oyashio class submarines but with a number of upgrades, including AIP and a distinct X-shaped hydroplane configuration. Six of a planned run of ten Soryu-class subs have been built. From keel laying to commissioning into the Maritime Self Defense Force each Soryu takes consistently four years to build, suggesting the subs—and the shipbuilders—are reliable.

Third, the Soryu submarines will be available relatively soon. Australia wants the submarines starting in 2026, when the Collins class will start aging out. Given their ongoing problems, replacements might well be ordered earlier than that. Two companies, Mitsubishi Heavy Industries and Kawasaki Shipbuilding, each maintain active shipyards and produce Soryus on an alternating basis. Representatives of Kawasaki were among those Japanese officials that went to Australia to make the recent sales pitch, so it’s possible Kawasaki could produce Australian submarines while Mitsubishi could continue building boats for the Maritime Self Defense Force. Dividing the work would make any modifications requested by Australia, particularly ergonomic ones, easier to accommodate.

By all accounts, Australia will be getting a good deal. At roughly $1.87 billion dollars each, the Soryu-class submarines are a bargain against Future Submarine Program projections of $3 to $5 billion each. Yet the decision to buy Japanese is a politically risky one for the government of Prime Minister Tony Abbott. A survey by the Australian Industry Group estimated a next generation submarine program would employ “about 5,000 workers and 1,000 Australian businesses”.

For Prime Minister Shinzo Abe and Japanese industry, the deal is a win-win. Abe, one of the most well-traveled Prime Ministers in Japanese history, will be able to point to the sale as a sign he’s brought already-close relations between Japan and Australia to an even higher level. The ending of the ban on arms exports will allow Japanese defense contractors to compete in the global arms market. Japanese military equipment, already regarded as some of the best  in the world, will be in high demand. Like them or not—and many Japanese will not—overseas arms exports can only help lift Japan’s struggling economy.

The deal would also be a win for Japan’s defense industry and indirectly, Japan’s Self Defense Forces. Japan tends to buy armaments, including domestic armaments, in small batches without the advantage of economies of scale. As a result Japan’s military-industrial complex has been struggling, with companies forced to diversify to stay in the defense business. Overseas arms sales will be an obvious boost. Foreign sales will also benefit the Self Defense Forces by lowering the per-unit costs of domestic defense equipment.

The loser in this deal is China. China is Australia’s largest trading partner, with $95 billion in goods exported to China in 2013. Despite being so important to the Australian economy China apparently has little leverage over Australia, as the government has shown no sign it believes deal will affect relations. China will be unhappy with the prospect of a Japan-Australia alliance, as well as ten more advanced, reliable submarines on the other side of the military balance. Beijing is projected to field 78 submarines by 2020, the largest fleet in the Asia-Pacific, so it could hardly complain about Australia having a mere ten.

The Australian-Japanese submarine deal will be good for both governments, and bad for Australian shipbuilders, the Japanese Left and China. You can’t please everyone. At least this time Australia will be getting what it’s looking for—reliable submarines—at a good price.