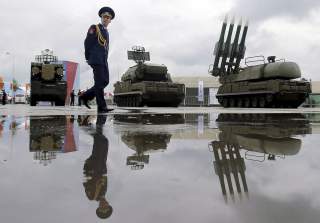 FOR NEARLY twenty years following the end of the Cold War, military confrontation between the United States and the Russian Federation seemed implausible. Even during periods of tension, as during the Kosovo crisis in the late 1990s, few believed that disagreement between Washington and Moscow could lead to a serious crisis, no less war. Before the first decade of the new century had passed, however, Russian officials were accusing the United States of working to isolate Russia. Such apprehensions have mounted steadily in Russia in the years since. At the same time, Russian behavior, including interventions in Ukraine and Syria, military posturing and harassment in Europe, and interference in Western elections, has led many in the United States to conclude that, while a U.S.-Russian conflict is by no means inevitable, the risk of such a confrontation is growing.

Even as U.S.-Russian tensions have risen, fundamental shifts in the military-technological environment threaten to erode strategic stability between the two nations. In the coming years, both sides’ extensive dependence on information technology, coupled with likely perceptions of lower risk for the use of “nonkinetic” and nonlethal attacks, are creating new incentives to use cyber and/or counterspace weapons early in a crisis or conflict. At the same time, the advent of novel cyber, counterspace, precision-strike, missile-defense and autonomous military systems could cause one or both nations to lose confidence in their nuclear second-strike capabilities—thereby eroding the stability afforded by mutually assured destruction.

WASHINGTON AND Moscow hold divergent—and, in some cases, directly contradictory—views of the international security environment. Whereas Russian leaders see their country as behaving in a fundamentally defensive manner, the United States and NATO perceive a revanchist actor intent on reimposing its will in eastern Europe and Central Asia.

The Russian government rates the United States and NATO as the most serious threats to Russian national security. From its standpoint, the United States is intent on remaining the world’s sole hegemon, and, as such, is unwilling to tolerate a strong Russia that enjoys its own sphere of influence. Moscow has spoken out against American and European efforts to encircle the Russian Federation by integrating former Soviet republics into Western institutions like NATO and the European Union. Russian officials further condemn the United States’ purported use of “color revolutions”—or, as Moscow would characterize them, the sponsorship of coups d’état under a guise of democracy promotion—to install proxies in Russia’s “near abroad.” In addition, Russian analysts assert that the United States and NATO are using a variety of political, economic and informational tools to penetrate and disrupt Russian society itself. In response to these perceived threats, Russia has undertaken a major military modernization effort and used more aggressive rhetoric and military operations, economic coercion and inducements, and information operations to counter alleged U.S. and NATO expansionism.

The view from Washington and Europe differs markedly. In the assessment of the United States and NATO, the Kremlin appears intent on restoring a buffer zone of compliant or client states throughout its self-declared “near abroad.” Western officials condemn Russia’s violations of international law and norms by using force against Ukraine, changing borders in Europe through violence, violating arms-control agreements and seeking to undermine Western democratic elections. They are equally concerned by Russian military modernization, which, coupled with intensified military exercises, activities and bellicose rhetoric, is seen as a direct threat to NATO security. The United States and its allies have responded to perceived Russian aggression by strengthening NATO’s deterrent posture, as well as holding increasingly frank discussions about NATO’s central role in defeating a Russian attack.

U.S.-Russian relations in the coming years will take one of three forms: strategic rapprochement, intensified military competition or managed competition. Although a long-term rapprochement cannot be ruled out, and indeed is a valuable (very) long-term goal, striving for such an outcome—or even another attempted “reset” (or “re-reset”)—in the near term would likely lead to quick disappointment. This reality does not eliminate room for the pursuit of common interests on issues such as nuclear nonproliferation, counterterrorism and counternarcotics. Yet both the United States and Russia must act on the understanding that there is a real potential for political disputes to lead to crisis, and for crisis to lead to conflict.

At the same time, Russia’s nuclear forces will, for the foreseeable future, allow it to destroy the United States as a functioning society. Hence, as distasteful as “working with” Russia may seem, the alternative of full-throated confrontation would pose unacceptable and unnecessary risks to the United States. That said, one should not brim over with unbridled optimism. Russian leaders are engaged in continuing efforts to undermine America’s alliances, democratic processes and global role. A change in this strategic approach appears highly unlikely, and as a result U.S.-Russia competition is the likeliest path short of outright confrontation. The challenge, then, is charting a balanced path ahead that recognizes the real competition and potential for conflict, while allowing for prudent cooperation and improvement in the relationship where possible.

THE UNITED States and Russia are each pursuing a range of advanced military technologies in order to bolster their respective conventional military postures in Europe (and in the western Pacific, in the case of the United States). Priority investments for both sides include novel cyber, counterspace, long-range nonnuclear-strike, missile-defense and autonomous weapons systems. Russian strategists writing in Military Thought, the in-house journal of the Russian General Staff, rightly note that these technologies are likely to significantly increase the pace of military engagements. Uncertainty about these systems’ effects will also increase risk of miscalculation or misunderstanding. These factors, both singularly and in interaction with one another, could lead to “slippery slopes” of rapid escalation from crisis to conflict, especially in cyberspace and outer space.

The U.S. and Russian militaries are increasingly dependent on networked information technology (IT), and both have embarked on ambitious offensive cyber programs. Because of the frailty of cyberweapons—once a weapon is revealed in detail, the adversary can fashion effective defenses—there exists a tremendous premium on secrecy regarding both states’ cyber tool kits. As a result, a great deal of uncertainty surrounds each side’s capabilities. Even so, a 2013 Defense Science Board report conveyed a sense of cyberweapons’ potential impact: “The benefits to an attacker using cyber exploits are potentially spectacular.” Similar dynamics obtain in the space domain. The United States relies heavily on vulnerable military satellites for a host of critical military functions. The Russian Federation does so too, but to a far lesser extent. At the same time, both side possess inherent antisatellite (ASAT) capabilities in their ballistic-missile defense interceptors, and are developing other ASAT weapons, such as co-orbital satellites, missiles, directed-energy weapons and cyberattacks.

Five specific factors could lead to rapid and unintended escalation in cyberspace and outer space. First, the United States and Russia will likely face strong incentives to use cyber and counterspace attacks early in a future crisis or conflict. These capabilities could offer—or be seen to offer—an opportunity to rapidly degrade an adversary’s information systems at the outset of a conflict, conferring a significant advantage to the first mover. Indeed, Russian strategists have been clear in their assessment that seizing the initiative in the information domain will be key to victory in future wars. In addition, Washington and Moscow may perceive the use of cyber and nonkinetic counterspace weapons as less escalatory than that of kinetic weapons, since they can be employed in nonlethal, non-physically-destructive and reversible ways. This assessment is also reflected in Russian doctrinal writings. Russian strategists characterize both ASAT and cyberweapons as optimal tools for deterrence, since they can be used to destroy enemy infrastructure without inflicting heavy civilian casualties. Such a belief could further lower the threshold for early cyber and counterspace attacks.

Second, cyber and counterspace attacks intended to be highly discriminative against military targets may cascade to affect critical infrastructure essential to a broader society and economy (e.g., electrical grids or commercial satellites). If this occurred, an attack intended to be precise and limited to military targets could instead result in the widespread loss of electrical power, water or other essential services, with resulting economic disruption and potential loss of life. The attacked side could feel compelled to respond at least in kind. Alternatively, a tit-for-tat cycle may occur, as one side might believe it could gain coercive advantage by intentionally demonstrating its ability to pose risks to the other side’s critical infrastructure through a combination of cyber, counterspace and perhaps sabotage attacks. Prominent Russian strategists endorse this view, arguing that attacks on socioeconomic targets can frighten an enemy population into abandoning its war effort against Russia. Yet such countervalue strikes could lead to major conflict and even, in an extreme scenario, nuclear war.

Third, attacks intended to target nonnuclear systems (including but not limited to cyber and space attacks) could inadvertently impinge on nuclear systems, and be misread as a much more escalatory move. For instance, some assets in outer space support both conventional and nuclear missions—particularly in the case of the United States—and both theater and strategic missions. In addition, many terrestrial elements of U.S. command, control and communications, as well as long-range strike systems, are dual-use, and there may be co-location of conventional and nuclear systems by one or both sides. Cyber or counterspace attacks on these systems could therefore implicate nuclear systems, raising the potential for inadvertent escalation.