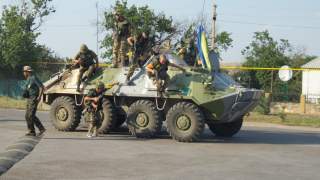 While economists insist that tough reforms like these are essential, the nascent Kiev government, which is already beginning to lose the public’s confidence, lacks the strength and unity required to administer the bitter medicine. The IMF also insists that Ukraine’s leaders must find $15 billion in debt relief, and $5 billion of it this year, before they receive the next tranche of that $17 billion. But no one is rushing to Ukraine’s aid. Not surprisingly, Ukraine’s parliament authorized the government to withhold payments to “unscrupulous” parties. Contrary to immediate reporting, the move falls short of a moratorium; but it does inch toward one, thus heightening fears of a default and sending the wrong message to would be lenders.

As for Ukraine’s much-discussed corruption, it enriches groups that are well connected to the state or part of it, and they won’t relinquish their power and wealth without a fight. Moreover, corruption in Ukraine has deep economic and political roots and did not start with Yanukovych, though he certainly raised it to new heights; it was baked into the system of political economy created during Leonid Kuchma’s presidency in the 1990s. (President Poroshenko, one of Ukraine’s oligarchs, was among those who thrived under this arrangement.) Creditors now demand that Kiev demonstrate tangible progress against corruption, but no country has extirpated this scourge quickly; and Ukraine will not be able to, not least because of a legal system even well-wishers involved in reforming it describe as dysfunctional and itself corrupt.

Putin well understands the magnitude of Ukraine’s economic problems, and his real aim may not be to grab more of its land but rather to wreck it economy and bring down its government by keeping the war, which according to Poroshenko costs as much as $8 million a day, simmering. If this in fact Putin’s strategy, he hasn’t done too badly, particularly because a main consequence of the war has been Kiev’s loss of a chunk of the Donbas, an industrial, energy, and mining center.

Given that sanctions have not worked and that renewed full-scale war is both probable and dangerous, the only sensible approach is shoring up Minsk II and working with Russia—and of course Kiev—on a formula that keeps Ukraine whole and addresses principal Russia’s security concerns. The terms that Ukraine and Russia are prepared to accept won’t be clear until the hard bargaining begins. At minimum, though, Ukraine will insist on regaining control of its breakaway eastern regions and guarantees of substantial Western economic aid. (It’s expensive, this democracy building.) Russia will push for a phased lifting of sanctions and some sort of neutrality pledge from Kiev.

But even more will be needed to create a durable peace. Heavy weapons and soldiers (regular and irregular) must be fully withdrawn from the war zones, with compliance monitored by third-party observers. A no-weapons-zone must be created on both sides of the Russia-Ukraine border and verification processes put in place. Without these additions steps, talk of elections in the Donbas, regional autonomy (or some other form of decentralization), and political reconciliation based on a new national compact will amount to verbiage.

Beltway orthodoxy avers that Washington must not appease Putin by negotiating with him and that he will cave if the economic screws are tightened, never mind that Putin remains unyielding and that the consensus among the 28 members of the EU on sanctions, already showing signs of strain, will not last indefinitely.  Victoria Nuland and Secretary of State Kerry’s trips to Russia suggest that stubborn facts may have finally induced the White House to try a different tack.

A meaningful deal on Ukraine will prove a longshot at best. But staying the current course will prove ruinous (economically and strategically) for Ukraine, and could push Russia and the United States from crisis to collision.