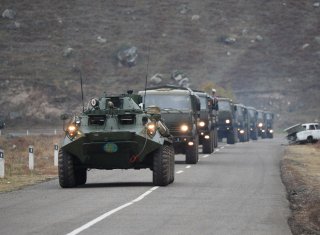 For over two weeks, Azerbaijani ecological activists have blocked the road from Khankendi (Armenians call it Stepanakert) to Lachin. They demand access to mineral deposits that have been illegally exploited by local Armenians in the Karabakh region of Azerbaijan. The area is currently under the temporary control of Russian peacekeeping forces in accordance with the Trilateral Statement—the ceasefire agreement signed between all three nations at the end of the Second Karabakh War in November 2020,

Many international policymakers and observers have rushed to support the Armenians, repeating a narrative about an imminent “humanitarian disaster” and accusing the Azerbaijani government of staging the protest on the road, which is supposed to be used to connect Karabakh Armenians with the Republic of Armenia. Experts who wish to spend some time considering this issue might discover that the conundrum around the Lachin road has deeper and wider implications, as well as a historical context.

Lachin was the first region outside the former Nagorno-Karabakh autonomous oblast that Armenia occupied on May 18, 1992, in the course of the bloody conflict with Azerbaijan. Armenian nationalists, who launched the irredentist project to unite Azerbaijan’s Karabakh autonomy with Armenia under the slogan of miatsum (unification) in 1987–1988, regarded establishing this road connection as a vital strategic goal. Thus, Lachin became the “miatsum road” that enabled military supply. In April 1993, Armenia attacked from two directions: Armenia proper and Karabakh, and another Azerbaijani region, Kelbajar, located between the former autonomy and Armenia.

From the beginning of the conflict at the end of the 1980s, Armenia built a narrative around imminent genocide and ethnic cleansing. At the same time, the Lachin road was presented as a key humanitarian link. On the ground, with violence happening on both sides of the conflict, the end result was the full ethnic cleansing of Azerbaijanis from Armenia and Karabakh. Armenia has since promoted illegal settlements in Lachin while trying to make the situation a fait accompli in the context of negotiations with Azerbaijan over a conflict resolution deal.

Throughout Armenia’s occupation, Azerbaijan, on numerous occasions, raised the issue of ecological damage and exploitation of natural resources by the Armenian side. Several international companies, usually led by ethnic Armenians—for example, the Switzerland-based Base Metals—were involved in the extraction of ore and gold from Karabakh and onto international markets.

As a matter of fact, one of the defining moments in the early days of the conflict was over an ecological issue. On November 17, 1988, a mass protest began in Baku over the threat to a forest near the city of Shusha from local Armenian authorities. What began as an environmental protest, “the Topkhana Movement” (the name comes from the forest), turned into one of national liberation. Later on, during the Armenian occupation, several fact-finding missions sent to occupied territories by the OSCE found the situation to be disastrous. After the 2020 war, while leaving the Lachin region in accordance with the ceasefire agreement, Armenian settlers burned houses and cut down trees.

Under the current circumstances, however, it seems that the main problem over the Lachin road is not only the illegal extraction of resources or environmental damage but also its use (or misuse) for non-humanitarian purposes.

The Azerbaijani side has accused Armenia of the illegal transfer of landmines, military personnel, and munitions—all of which are in violation of the Trilateral Statement. Armenian nationalists are worried that this will lead to the Lachin road ultimately falling under full Azerbaijani control. For this reason, Armenia is promoting a narrative of “impending humanitarian disaster” as a means of creating international pressure to compel Azerbaijan to allow the Lachin road to be kept under Armenian control. This would allow Armenia to keep illegally transporting military supplies and benefiting materially from the sale of illegally extracted natural resources.

For Azerbaijan, Lachin is thus a key security element in preventing a renewal of the ethnic cleansing and destruction that the Armenian occupation resulted in.

Often overlooked in these discussions is that the Trilateral Statement once again reconfirmed the Lachin corridor as being a part of Azerbaijan’s internationally recognized territory and vested it with security guarantees. Azerbaijan is obliged to ensure security for its entire population, including Armenians in the Karabakh region of Azerbaijan. If the use of this road entails a threat to its national security, no legal obligation can be imposed on Azerbaijan. The skepticism of some international observers over civilian activists in Lachin does not appreciate the force of Azerbaijani public opinion, which, on July 14, 2020, demanded that the government put an end to the Armenian occupation. Public calls to control Lachin are largely supported by every stratum of Azerbaijani society, including opposition parties.

Recently, the situation in Karabakh was aggravated by the arrival of a Russian oligarch of Armenian origin, Ruben Vardanyan, who, having become the “state minister,” derailed the beginning of a dialogue between local Armenians and central authorities in Baku. Vardanyan, notably sanctioned by the United States for money laundering, keeps curious company. Besides Russian backing, he has apparently befriended many Western liberals, such as David Ignatius, an associate editor and columnist for The Washington Post, and the late Vartan Gregorian, president of the Carnegie Corporation.

The Lachin road conundrum has three elements: the immediate cause, the ecological problems and the illegal exploitation of Azerbaijan’s natural resources; the use of the Lachin corridor for military purposes, contrary to the Trilateral Statement; and finally, the obligation to open transportation links (also in accordance with the Trilateral Statement).

Azerbaijan provides passage via the Lachin road. Moreover, Armenian and foreign (for example, Iranian) trucks use other roads through Azerbaijan’s territory, such as the Goris–Kafan route. However, Armenia, under various pretexts, refuses to create a passage from Azerbaijan proper to its exclave of Nakhichevan that passes through Armenian territory—something that is stipulated in Article 9 of the Trilateral Statement.

Overall, the situation over the Lachin road points to more fundamental problems: the lack of a formalized peace treaty (rather than a ceasefire agreement) and the current stalemate in negotiations between Armenia and Azerbaijan; the performance of Russian peacekeepers; the actions of radicals among Karabakh Armenians and the arrival of Ruben Vardanyan; and the attitudes of geopolitical actors/spoilers, such as France and Russia.

If there is a solution, it lies in a durable peace between Armenia and Azerbaijan based on the mutual recognition of territorial integrity. Unfortunately, the leading Armenian approach to peace remains the following: Azerbaijan must unconditionally recognize Armenia’s territorial integrity while Armenia will continue to regard “Nagorno-Karabakh” as an “independent” entity and fight for it through international actors and organizations.

Farid Shafiyev is Chairman of the Baku-based Center of Analysis of International Relations.