Bab el-Mandeb: The U.S. Ignores the Most Dangerous Strait in the World at Its Peril 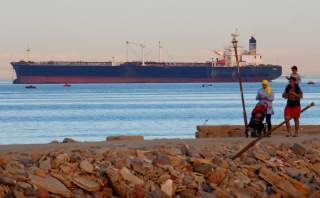 Relatively few Americans are aware that there’s a civil war raging in Yemen. And even fewer can tell you where the Bab el-Mandeb strait is located—or why its fate affects them.

The Bab el-Mandeb strait is a strategic waterway located between Djibouti and Yemen that links the Red Sea to the Indian Ocean. At its narrowest, it is only eighteen miles across. Exports from the Persian Gulf and Asia destined for Western markets must pass through the strait before passing through the Suez Canal. It is also perhaps the most dangerous and geo-politically contested strait in the world.

The civil war in Yemen and the border dispute between Eritrea and Djibouti means that constant conflict surrounds the strait. In recent years the United States, the North Atlantic Treaty Organization, and the European Union have all conducted counter-terrorism and counter-piracy operations in the region. Furthermore, the Americans, Chinese, Germans, French, Qataris, Emiratis, Saudi Arabians, Japanese, and Italians all have some form of military presence near the Bab el-Mandeb.

The two countries straddling the Bab el-Mandeb, Djibouti and Yemen, are hardly beacons of stability.

The tiny African republic of Djibouti is plagued with political corruption, economic incompetence, and international intrigue. For instance, Djibouti President Ismael Omar Guelleh helped himself to a fourth five-year term in 2016 after parliament dubiously eliminated a constitutional two-term limit in 2010. According to The Heritage Foundation’s Index of Economic Freedom Djibouti ranks 171 out of 180 countries scored in economic freedom. Power also remains heavily concentrated in the president's hands and, in recent years, there has been no noticeable progress on reducing government corruption.

Even with all the economic and political problems facing Djibouti, it has been courted by many outside powers due to its strategic location on the Bab el-Mandeb. It is home to America's only permanent military base in Africa, Camp Lemonnier. France, Italy Germany, and Japan already have military presences of varying strength there. Last year, China opened its first permanent overseas military base in Djibouti. Even though the base was initially billed as a “logistics supply facility,” it can handle up to ten thousand troops, and Chinese marines have used it already stage live fire exercises involving armored vehicles and artillery.

As with most places located along China's Belt and Road Initiative, Beijing has significantly invested in Djibouti's infrastructure by cutting sweetheart deals that advance China's geopolitical interests at the expense of the recipient country's sovereignty. For example, Djibouti is borrowing money from China at an alarming rate, and Beijing's share of Djiboutian debt stands at 91 percent.

In addition, China’s presence in Djibouti has a direct impact on U.S. military operations in the region. The Chinese have been accused of “blinding” U.S. aircraft operating nearby with lasers. Earlier this year, President Guelleh also brazenly ended the contract with Dubai’s DP World, one of the biggest port operators in the world, and nationalized the Doraleh Container Terminal. During a recent congressional hearing, lawmakers voiced fears that Djibouti had nationalized the port to give it to China as a gift. The commander of U.S. Forces in Africa, General Thomas Waldhauser, has said that if China placed restrictions on the port’s use, it could adversely impact resupplying Camp Lemonnier and the ability of Navy ships to refuel in Djibouti.

If things seem bad on the Southern shore of Bab el–Mandeb, then they are hardly any better on its northern shore in Yemen.

Yemen, Osama bin Laden’s ancestral homeland, has long been a hotbed of Islamist extremism and is a failed state embroiled in a bitter civil war resulting from the predictable chaos of the Arab Spring. The country is infested with terrorist groups and multiple overlapping insurgencies.

On top of this, meddling by Iran in Yemen has made a dangerous situation even worse. The chaos has allowed Al Qaeda in the Arabian Peninsula to flourish and develop into one of the most potent terrorist threats to the United States.

The threat posed to shipping through the Bab el-Mandeb from Yemen is real. In 2016, missiles were fired by Iranian-backed Houthi rebels at a U.S. Navy warship near the Bab el-Mandeb. Houthi forces also have deployed mines along Yemen’s coast and used a remote-controlled boat packed with explosives in an unsuccessful attack on the Yemeni port of Mokha in July 2017. Finally, the Houthi have also launched several unsuccessful naval attacks against ships in the Red Sea, including gunboats damaging a Saudi oil tanker near the port of Hodeidah last April.

When you combine Djibouti’s economic and political problems with Yemen’s security challenges, you get a deadly geopolitical cocktail directly threatening international shipping and U.S. interests.

Considering oil tankers transport approximately 4.7 million barrels of oil per day through the Bab el-Mandeb, the stakes are even higher. With growing Chinese involvement, a never-ending civil war in Yemen that has become a breeding ground for terrorism. Thanks to this, and Iran’s increasing role in the region, the United States cannot afford to ignore the Bab el-Mandeb.

Image: People walk on the beach as a container ship crosses the Gulf of Suez towards the Red Sea before entering the Suez Canal, in El Ain El Sokhna in Suez, east of Cairo, Egypt April 24, 2017. Picture taken April 24, 2017. REUTERS/Amr Abdallah Dalsh