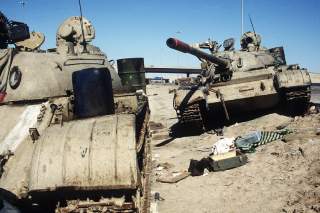 Most of all, Reagan should never have supported the mujahideen war against the Soviets in Afghanistan. In this case, hindsight once again proves to be invaluable—Bacevich expects Reagan to have foreseen that the mujahideen would go on to fight the West once the Soviets were defeated. Evidently, it is of little consequence to Bacevich that it was that very defeat that seriously undermined the authority of the Kremlin and contributed to the fall of the Soviet Union. Nor does Bacevich offer any alternative to the policy that Reagan pursued.

Even George H. W. Bush and his team of realists do not measure up to Bacevich’s exacting standards. He questions whether the United States should have supported Kuwait at all after it was seized by Saddam. As he sees it, Saddam’s aggression against Kuwait was at least partly justified by that country’s refusal to forgive Iraqi war debts. He sees no difference between the invasion of Kuwait and America’s annexation of Hawaii in 1898, ignoring post–World War II developments in international law, as well as the creation of the United Nations and the ratification of its charter, which outlawed exactly the kind of aggression that Saddam had perpetrated. In fact, he sarcastically minimizes the imprimatur that “the so-called international community” in the form of a UN Security Council resolution gave to Operations Desert Shield and Desert Storm. Finally, fully armed with hindsight, Bacevich argues that Bush should have ordered the destruction of Saddam’s Republican Guard. That he did not was due to the fact that “concern for appearances was displacing serious strategic analysis.”

Bush deliberately did not want to become enmeshed in a prolonged conflict precisely for the reasons Bacevich himself offers, namely, that “it’s hard to imagine how any victory over Iraq, no matter how complete, could have remedied” what Bacevich terms

“the vacuum left by . . . [the British]; intractable economic backwardness and political illegitimacy; divisions within Islam compounded by the rise of Arab nationalism; the founding of Israel; and the advent of the Iranian Revolution.”

Bush was not seeking to “remedy” these challenges; with the support of a coalition ranging from Britain and France to Egypt and Syria, his aims were limited. He wanted to roll back an aggressor, and that is what he did.

Bacevich not only criticizes Bush; he smears all the major actors in the war and, almost parenthetically in the course of doing so, lambasts other otherwise venerated figures as well:

“Schwarzkopf [the field commander who led the operation against Saddam] . . . shared MacArthur’s penchant for theatrics. As with Patton, maintaining his emotional balance required a constant struggle. Like Eisenhower, Schwarzkopf had a volcanic temper. . . . And like the thin-skinned Bradley, he was quick to take offense at any perceived slight. Generalship in wartime requires foresight, equanimity, and a supple intelligence.”

Apparently, these were qualities that MacArthur, Patton, Eisenhower and Bradley—those failed commanders of yesteryear—all did not possess.

AS BACEVICH sees it, the quality of American policymaking continued to deteriorate once Bill Clinton entered the White House. He argues that the American excursion into Somalia—it too is part of Bacevich’s “Greater Middle East”—was a debacle (which it actually was). In this case, Joseph Hoar (CENTCOM commander), Thomas Montgomery (commander of U.S. Forces Somalia) and William Garrison (commander of a special task force that included special-operations units) are all found wanting by Bacevich. “More than anything else,” he writes, “the Somalia campaign revealed severe deficiencies in American generalship”—in this case, their failure to gauge the political environment in which they operated. In fact, the generals were simply doing the best they could under impossible conditions and muddled political leadership in the White House. In any event, once again Bacevich does not outline what he would have done had he been in charge.

The American intervention in Bosnia and Kosovo (which readers may be surprised to learn are also part of the “Greater Middle East”), spurred on by the same liberal interventionist impulse that led to the fiasco in Somalia, perhaps need not have been undertaken at all. Bacevich certainly has a point when he posits that by supporting the Kosovo Liberation Army, which was little more than a terrorist organization, the West offered “a case study in how to make terrorism work, with the United States . . . both assisting and subsequently ratifying the results.” But its objective was not primarily, as Bacevich asserts, “to shore up NATO’s credibility.” Madeleine Albright, the administration’s leading advocate for intervention in both conflicts, truly believed that force was called for wherever there was a “responsibility to protect.” Blinded by his disdain for any military operation the United States or the West has undertaken since Vietnam, and determined to link every operation involving Muslims to his thesis about the Greater Middle East, Bacevich cannot bring himself to see what actually motivated Clinton and his team to intervene in the Balkans.

Bacevich considers the Clinton administration’s response to Al Qaeda’s bombing of both the World Trade Center in 1993 and the USS Cole in 2000 to have been laughable. But he reserves most of his spleen for the Bush administration’s wars in Afghanistan and Iraq. Of the team of veteran policymakers that Bush brought with him into office, Bacevich writes, “They arrived knowing everything they needed to know. They just didn’t know enough to avert a horrific attack on the World Trade Center.” Certainly counterterrorism czar Dick Clarke, in particular, tried to warn of an impending Al Qaeda attack on an American target, but Bacevich goes too far in conveying the impression that Bush and his national-security team somehow could have both forecast the exact nature of 9/11 and prevented it and that, therefore, someone should have “lost his or her job . . . [been] reprimanded or demoted.” As the 9/11 Commission made clear, the failure was systemic, not individual.

Bacevich opines that none of Bush’s predecessors had made a large-scale military commitment to the region, ignoring the fact that his father had deployed 425,000 more troops in 1990 than the combined maximum ever deployed to both Iraq and Afghanistan. He claims, without providing any source (in his otherwise heavily noted book) or accounting for Congressional support, that Bush administration policymakers “saw public involvement as inconvenient, more likely to infringe on their own freedom of action.” He asserts that the protracted war in Afghanistan was “waged in a country where the United States was without vital interests against an adversary that . . . did not directly threaten U.S. national security.” His argument flies in the face of the fact that the perpetrators of 9/11 had trained in bin Laden’s Afghan camps. Surely if Al Qaeda and their Taliban protectors were allowed to remain in place in that country, the threat of a repeat performance on American shores would have been very real.

Bacevich’s assertions appear far more frequently in his discussion of the American operation in Iraq. With no real evidence, he claims that once it was clear that Saddam had no nuclear weapons, the administration “insisted that good intentions should count more than mere veracity.” He asserts that “no other country” removed regimes “that Washington deemed odious,” though in fact France had done exactly that in West Africa for decades—with Washington’s blessing—and would do so again, together with Britain and other NATO allies, in the 2011 operation that enabled the overthrow of Qaddafi. He criticizes Donald Rumsfeld for directing all questions about planning for the Iraq operation to Tommy Franks, the field commander, “effectively excluding the Joint Chiefs of Staff from playing any meaningful advisory role,” though in fact the chairman, Gen. Dick Myers, was involved in all aspects of war planning, and as provided for in the 1986 Goldwater-Nichols legislation, the chain of command ran directly from Rumsfeld to Franks, and not through the service chiefs or the chairman.

Bacevich claims that once initial combat operations had ended, and the American military confronted a growing insurrection and civil war, it adopted the “get tough” posture of the Israeli Defense Forces. Bacevich argues that the IDF’s tactics “reflected an Israeli determination to maintain a permanent grip on the West Bank,” while the similar practices of American forces “raised the specter of the United States maintaining permanent control of Iraq.” He is wrong on both counts. The IDF has never taken a political position on retention of the West Bank, no doubt because much, if not most, of its officer corps supports a two-state solution. IDF tactics, while harsh, and perhaps too harsh, have always been intended to deter future acts of terrorism; on balance, Israel does a much better job in this regard than, for example, Western European forces. In any event, just as the IDF’s operations have no impact on Israeli political decisions regarding the future of the occupied territories, so American counterinsurgency operations in Iraq were in no way a signal of American long-term intentions. Indeed, as Bacevich himself points out, it was George W. Bush who signed an agreement for the withdrawal of American combat troops from that country.