Back to Basics: Japan to Join America in Confronting China 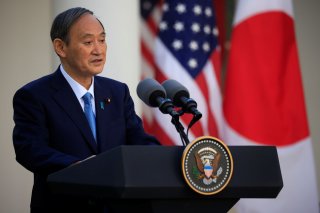 President Joe Biden hosted his first in-person summit with Japanese prime minister Yoshihide Suga last week. In a joint press conference and a joint statement issued at the end of the meeting, the two leaders reaffirmed that the U.S.-Japan alliance is “ironclad” and “unwavering,” and outlined many areas in which the two governments will sustain and even deepen their collaboration on bilateral and multilateral issues.  The meeting was widely recognized as an effort to restore mutual confidence to a relationship that had been subject to former President Donald Trump’s inconsistent and ambivalent attention to Tokyo.

One of the most interesting aspects of the summit was what was said—either implicitly or explicitly—and not said about China. The joint statement highlighted the U.S. and Japanese “shared vision for a free and open Indo-Pacific” based on their “commitment to universal values and common principles . . . peacefully resolving disputes and to opposing coercion . . . [and] shared norms in the maritime domain, including freedom of navigation and overflight, as enshrined in the UN Convention on the Law of the Sea.” All observers, including Beijing, understood these declarations as implicitly referring to China’s challenges to or violations of those principles.

But the joint statement also explicitly acknowledged that Biden and Suga had “exchanged views on the impact of China’s actions on peace and prosperity in the Indo-Pacific region and the world, and shared their concerns over Chinese activities that are inconsistent with the international rules-based order.”  Getting more specific than leaders of the two countries usually do, Biden and Suga stated their opposition to Beijing’s “unilateral attempts to change the status quo in the East China Sea” and their “objections to China’s unlawful maritime claims and activities in the South China Sea.”  Most significantly, they “underscore[d] the importance of peace and stability in the Taiwan Strait and encourage[d] the peaceful resolution of cross-Strait issues.” Finally, they expressed their “serious concerns regarding the human rights situations in Hong Kong” and Xinjiang.

Predictably, this was all contrary to the wishes of Chinese leaders in Beijing. In a telephone conversation the week before Suga’s visit to Washington, Chinese foreign minister Wang Yi told his Japanese counterpart, Foreign Minister Toshimitsu Motegi, that Toyko should “not get involved in the so-called confrontation between major countries” or be “misled by some countries holding biased views against China”—both obvious references to the United States.  Wang did not mention Taiwan, but he did expound on Beijing’s positions on the East and South China Seas and said China was “opposed to Japan’s interference in China’s internal affairs involving Xinjiang and Hong Kong,” according to official Chinese media reports.

Thus, it is unsurprising that Beijing was harsh in its criticism of the statements issued from the Biden-Suga summit. The Chinese Embassy in Washington expressed China’s “firm opposition,” calling the U.S.-Japan joint statement “an attempt to stoke division and build blocs against other countries” and insisting that “these matters bear on China’s fundamental interests and allow no interference.” Going further, a commentary in the official Chinese news service said that Tokyo’s and Washington’s “audacious attempt to incite confrontation and form an anti-China coalition runs counter to the worldwide aspiration for peace, development and cooperation” and is “doomed to fail” because “any harm to the integrity of China’s territory will face strong backlash from China.” Finally, an editorial in the Global Times—a newspaper run by the Chinese Communist Party—proclaimed that the U.S.-Japan joint statement revealed the “compulsive dominance” Washington has over Tokyo in a “master-servant” relationship, in which Japan has “actively and cautiously catered to” Washington’s “extreme China policy.” Global Times concluded by advising Japan “to stay away from the Taiwan question. It may play diplomatic tricks in other fields, but if it gets involved in the Taiwan issue, it will draw fire upon itself.  The deeper it is embroiled, the bigger the price it will pay.”

What is easy to overlook in this exchange of rhetoric in the triangular relationship is the potential fault-lines between Tokyo and Washington that Beijing is obviously trying to exploit. Chinese leaders did not fail to notice Japanese frustration with Trump, including his occasional admonition that Tokyo needed to provide greater financial compensation for the U.S. military presence in Japan. Nor was Beijing inattentive to Japanese concerns that predated the Trump administration—and were only reinforced by it—about the substance and sustainability of U.S. attention to Japanese interests and the reliability of the U.S. commitment to the region. As early as a decade ago, and following an escalation of Sino-Japanese territorial disputes in the East China Sea, such concerns helped prompt Tokyo to hedge its bets and pursue a more constructive and less volatile working relationship with Beijing—not at Washington’s expense, but simply to leave Japan less vulnerable to both a potentially hostile China and a potentially inattentive or preoccupied United States.

These efforts yielded some success. Although the maritime territorial disputes continued to percolate, Tokyo and Beijing over the past several years had been able to deescalate bilateral tensions somewhat, and Chinese president Xi Jinping was tentatively expected to visit Japan last year (which would have been the first such visit in over a decade) before the trip was postponed in the wake of the coronavirus pandemic—and growing Japanese concerns about Chinese actions in Hong Kong and Xinjiang. Beijing is now holding Tokyo to account for this apparent retreat. In his conversation with Motegi the week before Suga’s visit to Washington, Wang implored Tokyo to “cherish and safeguard the hard-won overall situation of improvement and development of China-Japan relations.” The Global Times editorial said more bluntly after the Suga visit that “Japan once met China halfway in the past few years, which led China-Japan relations to return to the right track. But now it has abruptly changed course and become part of the U.S. containment strategy against China. This has ruined the momentum of improvement in China-Japan relations.”

Beijing, of course, deserves ample blame for stalling improvement in Sino-Japanese relations, for all the reasons that Suga and Biden together cited last week in Washington. But fissures remain in the U.S.-Japanese relationship—including with regard to China—and were evident on the margins of the summit. Prior to Suga’s trip, press reports suggested that he was under pressure from Washington to join Biden in a joint expression of concern about Chinese behavior toward Taiwan amidst debate in Tokyo about whether this would unduly antagonize Beijing. As noted above, Suga endorsed the statement on “the importance of peace and stability in the Taiwan Strait”—the first such public statement by a U.S. president and Japanese prime minister in more than fifty years. But he appeared to be reticent about elaborating on it when he was asked to do so during his joint press conference with Biden. Moreover, a few days after returning to Japan, Suga told the Japanese legislature that the joint statement “does not presuppose [Japanese] military involvement at all” in a US-China conflict over Taiwan.

Tokyo has also has been reluctant to replicate Washington’s imposition of sanctions on Beijing over its severe human-rights violations in Xinjiang. When asked about this, Suga said only that he had “explained Japan’s position and initiatives regarding” Xinjiang to Biden, “who I think understood my points.”  In addition, it remains unclear whether Tokyo and Washington have a common view on the relative emphasis between competition and cooperation in dealing with Beijing going forward. “The United States and Japan recognized the importance of candid conversations with China, reiterated their intention to share concerns directly, and acknowledged the need to work with China on areas of common interest,” the joint statement said. But those areas were not specified, raising questions about whether there are diverging views between Tokyo and Washington on the utility or efficacy of pursuing cooperation with Beijing on some issues.

Suga’s visit almost certainly reflects Japan’s desire to reinvigorate collaboration with the United States in dealing with China, after several years of uncertainty in Tokyo about Washington’s attention to that challenge and readiness to address it. The Japanese, no doubt, are buoyed by the renewal of American emphasis on the alliance, and by the strong consensus that has emerged in Washington that China constitutes a major strategic challenge that needs to be confronted multilaterally.  But this does not mean that Tokyo will always share Washington’s views on how best to deal with Beijing—especially if they involve economic decoupling, diplomatic isolation, or military confrontation. Moreover, Tokyo will still have lingering concerns about the United States’ attention span, resource constraints, and staying power in East Asia—not least because of Washington’s inevitable preoccupation with America’s internal political and economic dilemmas. The fervent reaffirmations by U.S. and Japanese leaders that the alliance is “ironclad” and “unwavering” may reflect some underlying concerns that it isn’t.