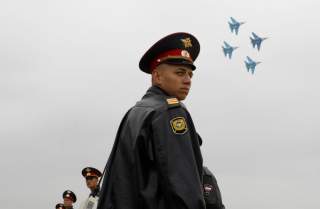 Another area where Trump could potentially make progress is in North Korea—the last battle arena of the old Cold War. The perils of a nuclear war on the Korean Peninsula that morphs into a larger regional conflict hardly require elaboration. Pragmatic diplomacy allied to military power, not a “bloody nose” strategy, is what’s required. Trump has impetuously indicated that he is planning to meet with North Korean dictator Kim Jong-un. But here Trump would need the cooperation of North Korea’s principal benefactor, Beijing. The Trump administration should promote military exchanges with Beijing to ensure that the bilateral relationship between China and America improves. In fact, if there is a true danger of conflict, as Trump embarks upon a half-baked tariff war, it may be with Beijing rather than Moscow.

With his combination of bluff and bombast, Trump could stumble into a calamitous two-front war in Asia and the Middle East. The lesson of the cold war is that containment, not rollback, led to the dissolution of the Soviet empire. It is not one that should be lightly discarded.