Back to the Future: Is ‘Integrated Deterrence’ the New ‘Flexible Response?’ 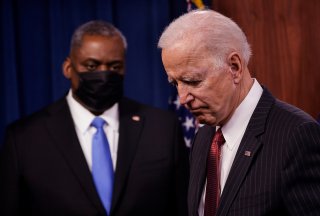 The concept of “integrated deterrence” has now been identified by the Biden administration as central to the development of its forthcoming 2022 National Security Strategy. Secretary of Defense Lloyd Austin described it earlier this year:

[I]ntegrated deterrence means using every military and non-military tool in our toolbox in lockstep with our allies and partners. Integrated deterrence is about using existing capabilities, and building new ones, and deploying them all in new and networked ways – all tailored to a region’s security landscape, and growing in partnership with our friends.

The need for the United States to be able to deter adversaries in a multi-domain context is seen as a pressing task with strategic competition as a defining feature of the twenty-first-century security environment. Here, adversaries such as Russia and China have increasingly leveraged so-called “gray zone” activities—from election interference and cyberattacks to salami-slicing tactics in the South China Sea—and new weapons capabilities and technologies to challenge the United States. China, in particular, has been identified by the Pentagon as the “pacing threat” that the United States must respond to and deter across all domains of potential conflict.

Vice Chairman of the Joint Chiefs of Staff General John Hyten’s comments also made clear the Biden administration’s focus on deterring China. Hyten said that integrated deterrence is necessary for the United States “to compete with a global competitor and at all levels of conflict.” Its goal, as Hyten told the 2021 Space and Missile Defense Symposium in September, is straightforward: to ensure that “when an adversary looks at us, sees the power that we bring the ability to defend—they say, ‘Not today.’”

But whether this is a new idea or one that will be effective for the contemporary strategic competition between the United States and China remains unclear. The concept of integrated deterrence and the strategic context that has given rise to it carry echoes of the Kennedy administration’s ill-fated strategic concept of “flexible response.” In fact, the history of flexible response provides a number of potential lessons as the United States attempts to develop and implement its deterrent posture.

Flexible Response: The Downsides of “Defending the Frontiers of Freedom”

Flexible response was born during a febrile strategic context similar to today. It was partly defined by fears of a “missile gap“ with the Soviet Union and communist insurgencies in the developing world. In response, President John F. Kennedy’s administration attempted to construct an alternative to what it saw as the weaknesses of the Eisenhower administration’s reliance on “massive retaliation“ (i.e. the threat of a nuclear response) to Moscow or its proxies’ conventional and non-conventional challenges to the status quo.

The proposed solution to this dilemma was a new strategy associated with former Army Chief of Staff General Maxwell Taylor, who became an influential military adviser to Kennedy. Taylor published a book in 1959 titled The Uncertain Trumpet, in which he lamented that the Eisenhower administration’s strategy and defense policy had set up the United States for but two options in the event of a conflict with the Soviet Union: humiliation or general nuclear war.

To remedy this, Taylor argued that the United States needed “a capability to react across the entire spectrum of possible challenge, for coping with anything from general atomic war to infiltrations.” Taylor asserted that it was “just as necessary to deter or win quickly limited wars as to deter general wars” because even limited wars could result “in our piecemeal attrition or involvement in an expanding conflict which may grow into the general war we all want to avoid.”

The essence of Taylor’s flexible response was that the United States would have a suite of capabilities to “respond anywhere, anytime, with weapons and forces appropriate to the situation.”

Taylor’s alternative to Eisenhower’s strategy of massive retaliation was seized on by Kennedy as politically useful during his election campaign in 1960. After being elected, Taylor’s concept proved influential as JFK sought a strategic concept that would provide him more options than humiliation or nuclear war. The strategy also underpinned his administration’s Cold War national security credentials.

As Kennedy’s Deputy National Security Adviser Walt Rostow remarked, massive retaliation meant that the United States was “often caught in circumstances where our only available riposte is so disproportionate to the immediate provocation that its use risks unwanted escalation or serious political costs to the free community.” For Rostow, this “asymmetry makes it attractive for Communists to apply limited debilitating pressures upon us in situations where we find it difficult to impose on them an equivalent price for their intrusions.”

Kennedy came to see that as constraining in a world where American national security could be “endangered not only by a nuclear attack but also by being slowly nibbled away at the periphery, regardless of our strategic power, by forces of subversion, infiltration, intimidation, indirect or non-overt aggression, internal revolution, diplomatic blackmail, guerrilla warfare or a series of limited wars.” Kennedy required a strategy that ensured that any “potential aggressor contemplating an attack on any part of the Free World with any kind of weapons” was met with a response that was “suitable, selective, swift and effective.”

Flexible response fit Kennedy’s desire to more precisely calibrate the American response to the nature of the Soviet threat. In practice, though, the desire for calibration had a number of effects.

First, it resulted in a large increase in the defense budget to expand the instruments at the administration’s disposal to deter and respond to communism. This included new spending on conventional and non-conventional capabilities, and a build-up of strategic missile and bomber forces. Kennedy’s desire to combat “limited military adventures and threats to the security of the Free World that are not large enough to justify the label of ‘limited war’” also led to a fixation on counterinsurgency and covert operations to enable American-aligned regimes to overcome communist subversion.

Second, flexible response created a credibility trap for the United States, even though it was designed to limit the risks for escalation. The conflict arose because the desire for precise calibration butted up against the administration’s continued commitment to “defend the frontiers of freedom.” This dilemma was felt most acutely in Vietnam under both Kennedy and his successor Lyndon Johnson where calibration created the conditions for a step-by-step escalation of American commitments from economic and military assistance to South Vietnam in 1962 through to the commitment of half a million American troops by 1967.

Integrated Deterrence: Avoiding the Pitfalls of Flexible Response in an Era of Strategic Competition

The core problems of flexible response concerned the where, what, and how of deterrence. Where were the core geographical regions in which the United States had to deter Soviet/communist adventurism in order to maintain American security? What actions by the adversary must be deterred? How were adversary actions to be deterred?

Here, flexible response adhered to a “universal security perimeter” concept in which Soviet or communist expansion anywhere must be deterred or responded to, leading to the commitment trap in Vietnam. The actions to be deterred, as Kennedy had noted, constituted a lengthy list from a direct nuclear attack on the United States or its allies to subversion, diplomatic blackmail, guerrilla warfare or a number of other tactics. Such a variety of potential actions, in turn, called for an expansive array of options from initiation of nuclear use to economic assistance and aid programs.

Where should U.S. attention be focused? Although Russian activities in Eastern Europe and Ukraine have constituted a challenge to that region’s post-Cold War order, whether those actions form a direct challenge to the vital security interests of the United States remains debated. A 2019 RAND study of Russian grey zone activities, for example, noted here that while Moscow engages in such activities on a near-daily basis it “is far from clear that they are having much effect.” Even Russia’s major advances in Crimea and Ukraine “combined gray zone techniques with more traditional applications of military power.” Moreover, they have not constituted unalloyed strategic triumphs as they galvanized U.S. and NATO responses. At best, they have been tactical successes for Moscow.

This, as Michael Kofman has argued, is symptomatic of Russia’s employment of strategies of raiding and brigandage in which it “doesn’t actually want to possess the object in contest but is instead seeking to inflict economic and political pain to coerce a more important strategic concession out of their opponent.” From Moscow’s perspective if it “can remain a strategic thorn in Washington’s side long enough for Beijing to become a global challenge to American leadership,” the United States “may have no choice but to negotiate a new great power condominium that ends the confrontation.” Russia, while a problematic actor, may not be seeking to overturn the existing international order but attempting to protect what it sees as its sphere of influence and have others like the United States recognize its status as a great power.