Back to the Future: The Potential of Great-Power Conflict 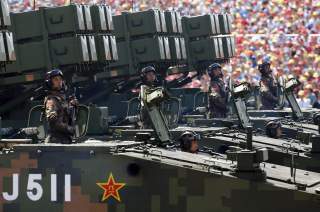 The world is going backwards into the future—the latest evidence being the new National Defense Strategy (NDS), which anticipates a possible great-power transition from the United States to China. There are two components of the new release: one is an unclassified synopsis that is eleven pages long and is available to the public, the other is a much longer (and presumably detail-oriented) report that will remain classified for the foreseeable future.

What is most notable about the NDS is that it avoids the militant-like nationalism of the National Security Strategy (NSS) that was released in December (i.e., there is no mention of “America First”), and it states in very clear terms that the United States remains committed to maintaining “a free and open international order.”

What does the DOD mean by “order?” In the field of international relations, the terms “revisionist state” and “status-quo state” are used to describe, respectively, countries that seek to change the current international system and those that uphold it. In the twentieth and twenty-first centuries, the international system has been defined by American hegemony and the spread of Western liberal democracy rather than its challengers—notably, fascism and socialism. This is commonly referred to as the liberal world order.

Under that world order, the United States is the most powerful country in the world. It often intervenes in international conflicts at a high cost, thus keeping dissatisfied nations from overturning the system. The NDS, however, refers to a recent shift in the current world order with an observation that, “We are facing global disorder, characterized by decline in the long-standing rules-based international order.”

The basis for that observation is the argument that the United States under the Obama administration took a brief, but arguably consequential, step back from the job of world-order maintenance. As proof of this, foreign-policy pundits often refer to Obama’s favorite quote (which he got from Martin Luther King Jr., who in turn got it from a nineteenth-century clergyman named Theodore Parker): “[T]he arc of the moral universe is long, but it bends toward justice.” The implication of this quote is that history is ultimately on the side of good rather than evil (e.g., dictatorships), and therefore the United States needn’t concern itself with great power competition or world order strategy. Critics point out that the president’s faith in that sentiment was put to poor use, however, because it led him to apologize for American power and to enact a more restrained foreign policy that in turn allowed revisionist states like Russia, China and Iran to flourish at the expense of their respective regions’ security. As Charles Krauthammer harshly wrote in the final months of the administration: “The consequent withdrawal of American power … has yielded nothing but geopolitical chaos and immense human suffering. (See Syria.).”

And that's not exactly a partisan argument either. In addition to conservative critics like Krauthammer, left-leaning foreign policy scholars, like Shadi Hamid of the Brookings Institute, also have been critical of the results of the Obama administration's well-intentioned foreign policy.

The NDS promises to reverse the “arc of history” approach to security policy with a three-tiered approach that prioritizes the “revisionist powers” of China and Russia, then “rogue regimes” like Iran and North Korea, and finally “nonstate actors” such as ISIS.

Of course, this new approach may alleviate serious concerns about the NSS—including my own—that the United States government no longer cares about global security. But policy will only follow well-written sentiment if President Trump himself can accept that America is the glue holding together an entire world order.

With China now poised to reclaim its previous spot in world history as a global hegemon, the proverbial clock is turning back. And that appears to be the reason why the DOD is serious about America being in the business of world order maintenance. As stated in the NDS: “Inter-state strategic competition, not terrorism, is now the primary concern in U.S. national security.”

Indeed, China already has a strong economy. It represents almost 15 percent of the global GDP to America’s roughly 24 percent. But, to put that in a slightly different perspective, China has grown astronomically in the last decade to overtake Japan as the second largest global economy. Thus, there is a real possibility that in the near future (likely decades) it may be able to surpass even the United States and then harness its capital to develop superior military technology. At that point, China would be capable of overthrowing the current international system.

The world has not seen global conflict the likes of World War I and II since the United States became the dominant power. Nor, for that matter, has it seen a recurrence of the great power conflicts of the eighteenth and nineteenth centuries. As the new defense strategy implies, take U.S. hegemony out of that equation and great powers may clash once again to the detriment of a cherished world order.

Gabriel Glickman is a nonresident associate fellow at the Begin-Sadat Center for Strategic Studies, Bar-Ilan University.