Bad Move, ISIS: Why America and Iran Should Work Together 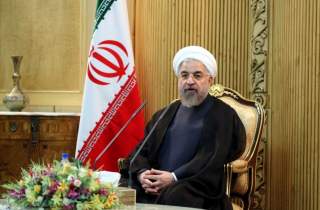 While a threat to U.S. interests, the Islamic State of Iraq and al-Sham (ISIS) presents us with a unique opportunity to “reset” the Middle East equation—to actively transform regional relations, to abate the cold war between Iran and Saudi Arabia and to forge a new working relationship with Iran. As the United States moves to escalate its war against ISIS and forge a coalition against the terrorist group, it is important that Iran be included in the process. After all, U.S. and Iranian interests have increasingly converged in the Middle East with the emergence of a common enemy, and no power in the region is better suited to taking on ISIS than Iran and its affiliated Shi’a militias in Iraq.

Just as importantly, Iran will have to be a key part of any meaningful solution to regional instability and any effort to help sustain a new unity government in Iraq. By formally acknowledging the role it can play in the conflict, Iran can be guided into becoming a constructive stakeholder in a more inclusive Middle East order—a goal that has become increasingly salient as the possible success of the Iranian nuclear negotiations forebodes a transformation of the Middle East status quo and Iran’s role in the region.

Despite its public statements, Iran has already signaled its willingness to cooperate on ISIS. Iran’s decision to remove its support from former Iraqi prime minister Nouri al-Maliki was not primarily driven by fear or simply a response to the grave threat posed by ISIS—as commonly perceived in the West—but rather a demonstration of its own flexibility and accommodation with regional powers. Based on my conversations with the conservative elite in Tehran during the summer, the Iranian leadership does not view ISIS as a serious threat to the country, but rather an opportunity for further empowerment—not just for Iran, but for the larger Shi’a community and the “popular militias” in Iraq as they become entrenched as a consequence of the conflict. Iran’s influence and leverage in Iraq has certainly expanded with the ISIS offensive. By rapidly moving to support the Shi’a militias at the very beginning of the conflict, Iran has effectively gained the support of the Iraqi Shi’a as they have been pushed toward Iran as a source of protection. Iranian influence has also increased over the Sunni Kurds as it has helped them establish a buffer zone on its Western frontier.

Iran’s decision to facilitate Maliki’s removal signals the leadership’s intent and willingness to cooperate with regional countries and the United States in search of a political solution instead. This intent is most clearly demonstrated by the prominent role played by Rear Admiral Ali Shamkhani, the chairman of Iran’s Supreme National Security Council, when he traveled to Iraq to broker an agreement on a new unity government. Shamkhani’s role is important for two reasons. First, not only is he a moderate in the Iranian political spectrum—appointed last year by President Rouhani—but he is also an Iranian of Arab origin who is believed to be held in high esteem by the Saudi King. Both his appointment and his recent visit to Iraq signal Iran’s desire to pursue rapprochement with the Saudis and abate sectarianism.

Second, Shamkhani’s role demonstrates that the Iranian Revolutionary Guards work within the constitutional boundaries of the state—operating within, rather than outside, the Supreme National Security Council to discuss and negotiate Iran’s role in Iraq. This development was particularly striking, since the security files of Iraq and Syria belong to the Revolutionary Guards and the position of the Guards has only strengthened with the escalation of the ISIS conflict. By working within the Council, the Guards opened the space and possibility for greater foreign cooperation, allowing the Iranian government to influence and coordinate with the Guards based on government discussions with the Iraqis and external powers.

These positive signals, however, seem to contravene Iran’s growing declarations that it will not engage U.S. efforts against ISIS. It also begs the question of why Iran would cooperate with the United States or an Arab coalition if it perceives itself to be strengthened by the conflict and if it considers ISIS to be a foreign conspiracy. Of course, it is not likely that Iran will work with the United States openly, due to the historical relations between the two countries, but it may do so within a regional framework that formalizes Iran’s role and protects its interests in the Middle East. In other words, Iran is looking at the larger picture and vision it has for the future Middle East beyond ISIS and will base its foreign policies on two driving considerations: Iran’s role in the security architecture of the region, including in Syria, and the increasing sectarian nature of conflicts and politics in the Middle East. If cooperation preserves Iran’s role in the region and diminishes sectarian strife, Iran will cooperate. For Iran to do so explicitly and publicly will depend on how it sees itself to be accepted and incorporated as part of this process—one from which it sees itself largely excluded thus far.

By viewing ISIS as an opportunity to “reset” its working relation with Iran in the region, the United States can help Iran become a constructive player in the conflict and weaken the potential for it to act as a spoiler or destabilizing force. Moreover, it will allow the United States to make effective use of Iranian power and the Shi’a militias in opposing ISIS, by far the best regional means of military boots on the ground. To do so, the United States must not only clarify its own vision for the Middle East, but also, just as importantly, persuade Saudi Arabia to cooperate and work with the Iranians. Yes, engaging Iran and incorporating it as part of the Middle East order will be a daunting task fraught with its own risks, particularly at a time when the nuclear negotiations are taking place. But not doing so will only further exacerbate the ongoing conflict in a direction that will be worse not only for the entire Middle East, but for U.S. interests as well.

Payam Mohseni is the Director of the Iran Project at Harvard Kennedy School’s Belfer Center for Science and International Affairs and a Fellow for Iran Studies at the Kennedy School.