Bahrain Heads Closer to the Abyss 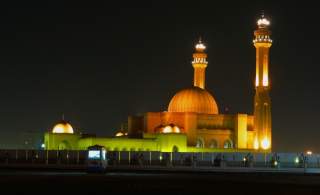 Two policemen were killed and six wounded—one of whom is reportedly in critical condition—when an IED targeted their bus on Sitra island in Bahrain during the morning hours of July 28. Often referred to among the Shia opposition as “the capital of the revolution,” Sitra island frequently witnesses protests, tire fires, arrest operations, and unsophisticated militancy from one of the multiple Shia militant groups operating in the country.

A previously unknown group, Wa’ad Allah Brigades, claimed responsibility for the attack. At the same time, and in the days following, police also substantially increased their presence across Sitra island, conducting multiple arrest operations and announcing that a number of suspects had been identified and detained. According to the Ministry of Interior, the explosives used in the bombing were identical to those seized both on July 15 by the Coast Guard and in Dar Kulaib in June.

Accusations of Iranian involvement surfaced soon after, which is not an uncommon claim in militancy-related and other issues in Bahrain. In this context, the materials found and individuals arrested in the aforementioned July 15 seize was linked to Iran. Tehran, for its part, denies it.

Allegations of foreign interference in any country—even if true—serves as method of delegitimizing domestic opposition and passing on accountability. Rather than describing militancy, protests, and so on within the framework of disgruntled or radicalized citizens, which would raise the question of potential governmental responsibility, foreign interference places the blame squarely on the shoulders of the relevant foreign party.

In Bahrain, the issue of militancy cannot be the exclusive responsibility of Iran or any other foreign party. Even in a post-2011 environment that saw the creation of the Bahrain Independent Commission of Inquiry, elements of the population remain discontent with what they perceive as insufficient reform. Even if this is only a perception (and this article will not delve into such an argument), the oft-used phrase “perception is reality” is appropriate here. Protests, albeit many of which are quite small, are recorded on a daily basis, primarily in areas outside of Manama that house members of or populations sympathetic to the Shia opposition.

Militancy, too—even if unsophisticated—continues to be claimed (and sometimes confirmed by the Ministry of Interior) on a relatively regular basis. Since the July 28 Sitra island IED, for example, another group known as the al-Mukhtar Brigades issued a statement claiming an attack against police in Diraz on August 1 in retaliation for arrest operations in Sitra. And while this latter group appears to be the most active, other groups also claim attacks, including the al-Ashtar Brigades, whose most recent one was issued on July 18 for an attack in the al-Maqsha-Karranah area.

The frequency of militant attacks since the 2011 protests broke out and the emergence of new groups suggests a rising perception among members of the Shia opposition, and particularly those connected to the unofficial groups, that nonviolence is ineffective. (Such nonviolence is the platform of the official societies in the country, including the prominent al-Wefaq National Islamic Society.) Continued activity despite persistent arrest operations indicates that either those being arrested are not actually members of these groups, or that ongoing recruitment is occurring.

Perhaps most importantly, Wa’ad Allah Brigades’ attack in Sitra raises questions regarding the capabilities of these militant groups. While some reports claim it was the “worst” since the March 2014 bombing in Daih that killed three policemen, the total number of killed and injured on July 28—eight—is notably higher. Although it is unclear at this time whether the attack represented increased capabilities of this group or merely involved the “lucky” and strategic placement of the IED, there is evidence to suggest the former. The July 15 seizure of explosives described as identical to those used on July 28, included 43.8 kilograms of C4. (For comparison purposes, prior IEDs in Bahrain have largely involved devices such as pipe bombs or gas cylinders.) Stratfor, moreover, states that the shrapnel pattern indicates more sophistication, as does the timing and location of the blast.

Continued arrest operations and increased police deployments have thus far failed to prevent militant activity in Bahrain. While the incidents witnessed thus far are relatively crude, containable, and pose a more limited threat, the potential for increasingly sophisticated attacks raises serious questions. Foreign operations (business and military) and day-to-day life for the most part proceeds as usual in the country, especially in the Seef District and capital. Even more so than now, the threat and possible manifestation of more sophisticated and deadly attacks may cause some to ask whether other Gulf states, such as the United Arab Emirates, are more optimum locations.