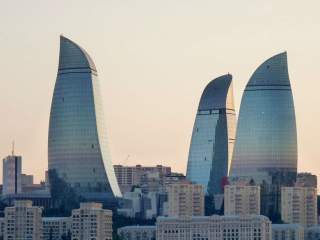 It has been a ill-omened start of the year for Azerbaijan's foreign policy. For the last several years, Baku was attempting to embrace its position as a so-called "keystone state" in one of the world's most strategic pieces of real estate. "Keystone states" are those countries "located at the seams of the global system and serve as critical mediators between different major powers, acting as gateways between different blocs of states, regional associations, and civilizational groupings."

Taking to heart the lessons of Georgia in 2008, Azerbaijan sought to ensure its security and prosperity through balancing its relations with all the major regional and global actors and to avoid dependence on any one power. Baku sought to market itself as the central terminal uniting the north-south route from Europe through Russia and Iran to India with the silk road connecting China and the West. The government found ways to make sure that every key player had incentives to maintain Azerbaijan's stability and independence. It marketed itself to Turkey and Europe as a source for Eurasian energy independent from Russia, but still found ways to give Moscow and Tehran stakes in its energy industry. It cultivated its position as a nominally Shi'a Muslim state interested in good ties with Israel without compromising its outreach to the Arab world and Iran (even though this has also made Baku a tempting target for terrorist activity). It pursued security cooperation with NATO while holding joint maritime exercises on the Caspian Sea with the Russian navy. It has distributed positions in major energy projects across a wide range of American, European, Middle Eastern, Eurasian and Asian firms—one of the rare instances where U.S., French, Iranian, Russian and Japanese companies might end up as de facto—or even de jure—partners.

Ironically, the aftermath of the 2014 crisis in Ukraine actually boosted Azerbaijan's prospects. European states anxious to preserve energy security have turned to Azerbaijan as an alternate supplier, while Russia seeks to boost economic ties with Baku to compensate for items now unattainable due to the pattern of sanctions and counter-sanctions. Baku not only hosted European-level sporting and cultural events but played host to major delegations from all of the major powers seeking to reaffirm or expand ties with Azerbaijan. Baku also benefitted from being designated as the special dialogue partner by Turkey during its presidency of the G-20, heightening its visibility on the global stage. With all of these new developments, Azerbaijan was even hoping that progress might be made in resolving the frozen Nagorno-Karabakh crisis more in Baku's favor, on the longshot hope that Russia, in particular, might be able to influence Armenia to be more accommodating of Azeri demands.

In the waning days of 2015, however, these plans have been subject to a series of shocks. The economic slowdown in China is forcing Beijing to scale back or postpone many of its ambitious Eurasian projects. European stagnation, in turn, may reduce the need for a variety of east-west routes to ship goods across the Eurasian landmass. Azerbaijan remains a strategic partner for the West, particularly in terms of energy, but there is a greater willingness in both Washington and the key European capitals (as well as in EU-level institutions) to press Baku on human rights issues and shortfalls in governance—a trend the Ilham Aliyev government finds most unwelcome.

It has been the spillover from the Syria crisis, however, which carries the most potential to upset the Azeri apple cart. The Russian decision to intervene directly on behalf of the Bashar al-Assad government included the use of long-range bombers based in Southern Russia and ships from the Caspian flotilla—some of the very units the Azeri military had been exercising with. Although Azeri territory itself was not crossed by Russian military units, it was an uncomfortable reminder that the Caucasus remains a zone for Russian power projection.

Matters worsened when Turkey shot down a Russian fighter which had briefly crossed into Turkish airspace from Syria. The ensuing fallout and the unraveling of the Turkish-Russian entente cordiale is very problematic for Azerbaijan whose keystone strategy requires maintaining good relations with both Ankara and Moscow. The worsening ties between Presidents Vladimir Putin and Recep Tayyip Erdogan have provided an opportunity for Armenia to repair its relations with Moscow, especially in security matters. And while Azerbaijan was expecting that the nuclear deal between Iran and the P5+1 would provide a boon to Baku as sanctions were lifted and Azerbaijan's southern door to the Persian Gulf could be fully opened (or Iranian energy could be transited by Azerbaijan destined for Western sources), the Saudi-Iranian spat following the execution of Shi'a cleric Nimr al-Nimr and the subsequent attack on the Saudi embassy in Tehran also complicates Baku's efforts to maintain balanced relations with all of its major partners. To make matters worse, the frozen Nagorno-Karabakh conflict might not be so frozen, as incidents along the lines have increased in tempo. The nightmare scenario is the resumption of fighting--which could then bring in both Russia and Turkey and reignite a Caucasian conflagration.

In years past, the United States might have played a key role in helping to defuse tensions. But with the Persian Gulf now in a state of heightened tension, the Syria conflict unresolved, and the North Koreans deciding to remind the world that they still can make trouble, Azerbaijan is not sitting at the top of the President's agenda.

Can Azerbaijan continue to perform its delicate balancing act in 2016?