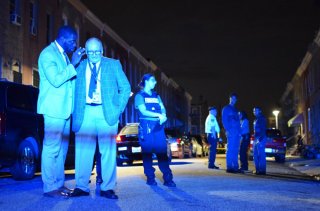 He never made it out of that empty lot. 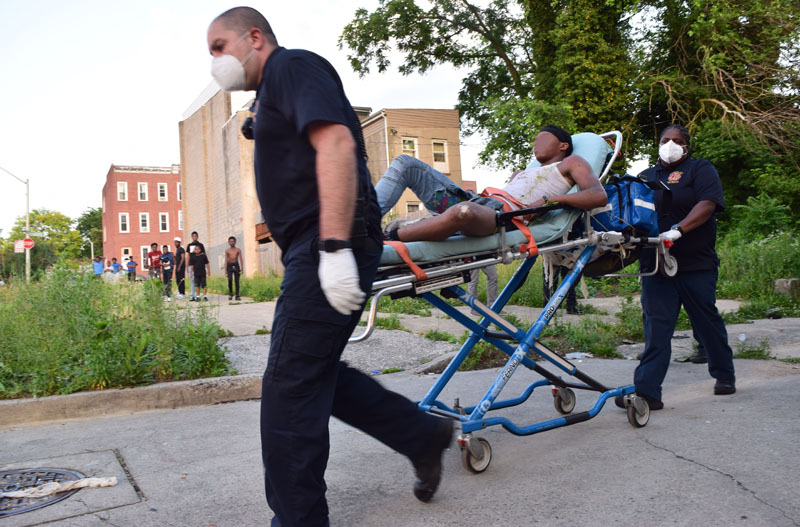 In the aftermath of the police pursuit, the teenager lay disabled amid the long weeds and trash. He had collapsed under the weight of a police car that had run over him with its right two wheels. Days later, people took to social media to decry the excessive use of police force while others said that the young criminal had rightfully suffered the consequences of his actions.

But those people almost didn’t know that the incident had happened.

Police didn’t say anything over the scanner to indicate that a department vehicle had been involved in a pursuit gone terribly wrong. It wasn’t a conspiracy on their part. They were simply responding to events as they unfolded. Afterward, a member of the helicopter crew dropped down to a sub-channel to ask the officer involved in the collision if he was aware that he had run over the teenager.

“I felt like he ran into the vehicle,” the officer said. “That’s when I jumped out.”

“Reviewing our tape it looked like you went over him,” the crew member informed him.

A group of children who had been playing nearby had initially considered themselves lucky to have front-row seats to a police chase. It was the highlight of their hot spring day. But then, as they watched a police vehicle run over a sixteen-year-old kid, their perspective changed. That’s when the consequences of the actions tied to all parties involved extended beyond a teenager who risked being crushed to death for trying to get away with a crime, beyond a police officer who may have miscalculated his trajectory when overzealously trying to capture a carjacker whose age was unknown at the time. The children gathered in the alleyway next to the empty lot, their mouths agape with shock and their faces painted with looks of distress.

“The police hit him,” the littlest one said. He then walked up to the spot where the police were hovering around the collapsed carjacker and put his hand over his heart, patting it against his chest to mimic the rhythm of a heartbeat. It was his way of connecting with the teenager in a town where almost everything is connected in some small way. Afterward, after medics had put the carjacker onto a gurney and rolled him toward a nearby ambulance, the children chased after him. They wanted to see with their own eyes that his injuries weren’t deadly. 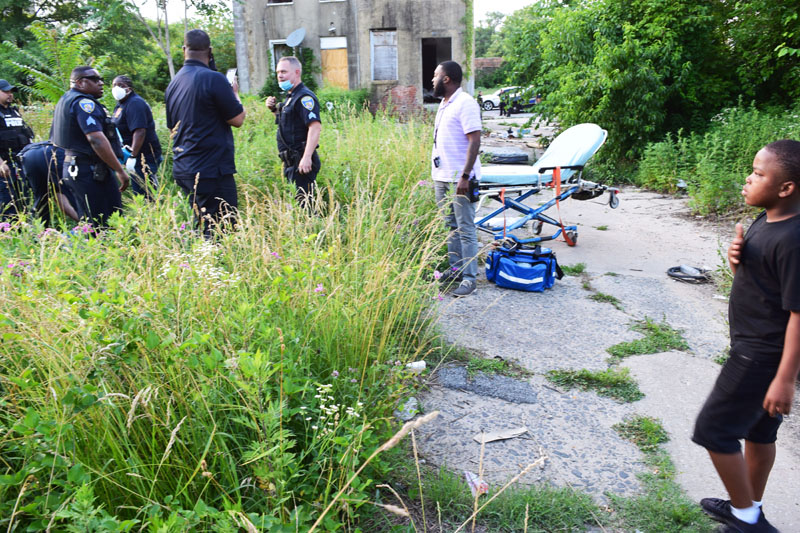 There were no news reports on the incident that evening or the next day or the day after that. It was almost as if the police-pursuit-gone-wrong had never even happened. Police kept the incident quiet for four days, despite inquiries made by the local press, and only released video footage of the incident that the helicopter crew had recorded after pictures, audio clips, and drone footage were made public. Again, it would be ridiculous to expect the police department to update the public every time a would-be criminal didn’t get away with a crime. But was it wrong to expect the department to inform the public of an investigation that had been opened because a crime had potentially been committed against a criminal? Even if no one involved was guilty of deliberately hiding the truth, were they innocent of creating the conditions that made the truth concealable? They weren’t when they agreed to encrypt the police scanner channels in one of the most violent and corrupt cities in America.

Baltimore is the birthplace of The Star-Spangled Banner whose lyrics people recite by memory at sporting events with their hands pressed over their hearts. It is the home of immigrants yearning to be free whose various cultures helped create an eclectic and interesting city. It is the land of the Gun Trace Task Force, which terrorized the city’s residents for three years. To some degree, local reporters will still be able to track police activity. The police department said it was prepared to accommodate them. But to some degree, there are problems that will limit the lens of those reporters. There is a time gap at night when most local news organizations cease operating. Cameramen no longer show up at crime scenes. No one is at their desk listening to the scanner. It is in this blind spot where many, many extraordinary events have occurred over the years, spanning from police pursuits to attacks on police. 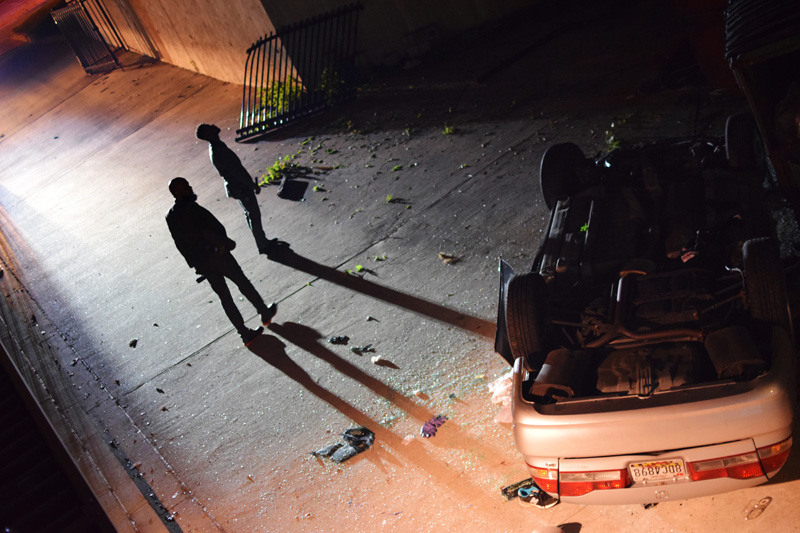 For instance, on July 24, hundreds of people had gathered near the intersection of Greenmount Avenue and 24th Street to socialize on a warm weekend night. Police had been keeping an eye on a large street party when they noticed a group of people fighting around 11:45 p.m. The fighting eventually escalated into bullets flying through the air.

“It’s only two of us and we have probably 500 people out here right at Greenmount and 24th,” an officer informed his colleagues over the police radio after someone fired off three rounds in the 2400 block of Greenmount Avenue at 11:54 p.m. Several seconds later, someone fired off an additional three rounds in the 500 block of E. 23rd Street, according to data collected by the city’s ShotSpotter gun detection system. During the following two hours, officers had to request backup several times. Cell phone video recorded by a bystander showed an unruly crowd of people confronting a small number of officers on multiple occasions. At one point, an officer had to ask for help removing people who had climbed on top of a patrol vehicle. Eventually, every available officer across the city was redirected to the high-tension street gathering.

The chaos was tantamount to an unsuccessful mini coup. In one of the wealthier neighborhoods, like Fells Point, the confrontation would have attracted the attention of local lawmakers and evoked the uproar of unhappy residents. But in the impoverished neighborhood of East Baltimore Midway, where Ravens rookie kicker Kaare Vedvick was found after he was brutally assaulted in September 2018, his face so badly beaten that first responders initially thought he had been shot, it only attracted additional bits of trash along the street curbs.

To make matters worse, in the months leading up to encryption, the city was stripped of some of its best reporters and editors. This occurred not long after money-eating hedge fund Alden Global Capital took over the company that employed them. In mid-May, after the New York-based hedge fund paid $633 million for Tribune Publishing’s various publications, reporters at the Baltimore Sun and its sister publications were offered the opportunity to take a lump sum of cash and leave. By late June, several Baltimore Sun Media Group employees had taken the buyout offer. Some of them left after working at the newspaper for decades, taking invaluable institutional knowledge with them.

The blind spot that already existed during the overnight hours before encryption would extend into the daylight due to a reduction of resources. After all, a human being is only capable of performing so many tasks. A person is prone to operate under duress when they are asked to ditch the small stuff to focus on another thing or to drop the biggest project in favor of working on smaller projects. Maybe they would have to make hard choices, letting a tip with the potential to have a profound impact fall through the cracks which wouldn’t have otherwise fallen through the cracks. Maybe the hard choices would be made for them.

As business models have shifted, so too has the workload expected of newsroom employees at nearly every media organization. It’s the popular “less is more” mentality of corporate ownership. There are fewer employees and now they will be asked to perform additional tasks. This will save money and allow corporate owners to keep the cushy life to which they have become accustomed; but also, this is how a city dies: quietly, in darkness, with few ears and eyes monitoring its groans and growth, its struggles and strife. 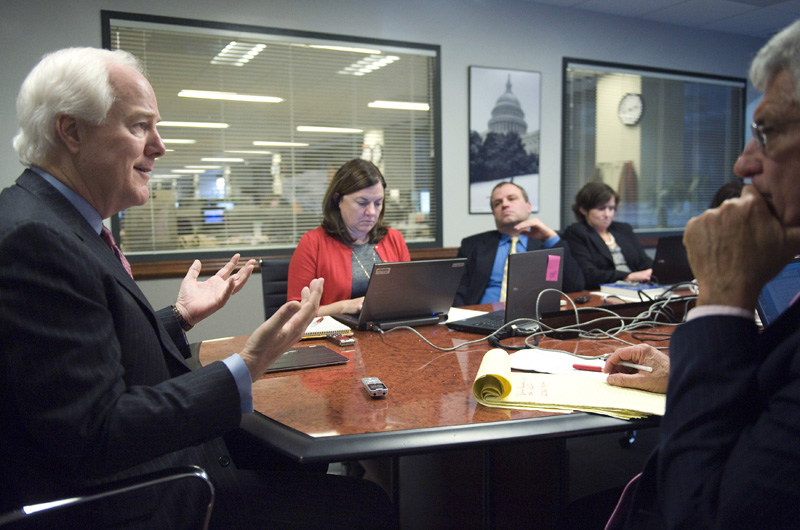 The strip-mining of publications through buyouts has become a common business tactic across America. The gutting of the Baltimore Sun was expected. It cast an ominous shadow over a city that often lurches from one unexpected crisis to the next, from one shocking event to the next. Baltimore operates at a speed that its governing officials are practically powerless to alter. A proactive person can mostly address the city’s problems as they arise; they can rarely prevent them from arising. During the pandemic era, they seemed to arise more quickly. Neighborhoods that had rarely seen violence were noticing new crime trends. For example, in Mid-Town Belvedere, an upscale neighborhood that wrapped around the southern side of the train station and catered to higher-education students, there were few major crimes. That changed in 2021. By late June, the number of shootings in the neighborhood had increased and the number of fatal shootings had doubled when compared to previous years. During that same time, violence had also increased at the crown jewel of Baltimore’s tourist attractions: Inner Harbor. The area surrounding the harbor was home to high-end chain restaurants and dragon-shaped paddle boats. In pre-pandemic times it was packed with visitors and city residents who walked, biked, and jogged around the water. They shopped, rented scooters, and met friends for dinner. By late June, it was the site of three shootings.