Bangladesh: The Real Winner in the Iran Nuclear Deal? 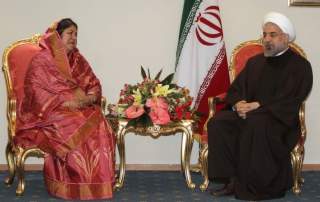 As the world comes to terms with the Iran nuclear deal, there has been plentiful analysis on its impact across the world. The focus largely has been on the impact in the Middle East. Its impact on the Indian subcontinent has also been researched and commented upon, with a specific focus on how India and Pakistan may benefit.

However, little has been said about the nuclear deal’s impact on Bangladesh. Oftentimes, news on Bangladesh is dominated by depressing topics such as corruption, floods and heart-wrenching human tragedies such as the Rana Plaza garment factory collapse. All of this gives a bleak picture of Bangladesh. Analysis of the Iran deal’s effect on Bangladesh is an opportunity to buck the trend of disheartening news stories and to provide some analysis of why this deal can benefit Dhaka in such a positive manner. The successful execution of the deal holds promise for Bangladesh economically and in other sectors.

How does this deal affect relations between Bangladesh and Iran? Bangladesh’s foreign ministry welcomed the agreement: “Bangladesh firmly believes in nuclear disarmament and nonproliferation and peaceful uses of nuclear energy.” This is not surprising, keeping in mind the history of cooperation that these countries share, and particularly in the economic sphere. Bangladesh-Iran trade has increased by over 36 percent from 2005 to 2013. Exports to Iran increased from $38.09 million to $75.41 million in that time period—a mammoth 98-percent increase in those eight years.

In 2013, the Iran-Bangladesh Joint Economic Commission agreed to increase trade volume two- or threefold in the next three years. More recently, the head of Iran’s chamber of commerce, mines, industries and agriculture called for the establishment of an Iran-Bangladesh trade committee to further increase trade cooperation. Members of the Federation of Bangladesh Chambers of Commerce and Industry (FBCCI), Bangladesh’s business owners’ representative organization, are scheduled to visit Tehran to discuss ways to broaden economic ties. Members of the FBCCI hope to take advantage of an Iranian economy, which will gain $100 billion from sanctions relief. As for Iran, its ambitions are clear regarding Bangladesh: It wishes to be a bigger economic partner and to increase its prominence. Increased cooperation with Dhaka may signal Iran’s wish for greater cooperation on the Indian subcontinent.

Keeping the Iran-Bangladesh economic history and potential in mind, how will the Iran deal affect relations between these two countries into the future? Mohammad Javad Zarif, Iran’s chief negotiator for the deal who also happens to be Iran’s foreign minister, recently visited Bangladeshi prime minister Sheikh Hasina and Bangladesh’s foreign minister in Dhaka. The agenda contained, among other things, measures to restore Bangladesh’s trade with Iran on jute, which has suffered ever since Iran was subjected to sanctions for its nuclear program.

On his trip, Zarif acclaimed Iran as a trustworthy source of energy of which Bangladesh should take full advantage. More broadly, in a press conference Zarif asserted that “unjust sanctions” against Iran will now be lifted, thereby strengthening the bond between the two countries. Zarif also announced a visit of Bangladesh’s minister of finance to Tehran in the near future, further emphasizing the focus on economic ties. Zarif, incidentally, also spoke of cooperation with Dhaka on counterterrorism.

Meanwhile, Iran’s ambassador to Bangladesh has also indicated that Tehran is interested in importing clothes and agricultural products from Dhaka—both of which will contribute toward the previously stated goal of increasing trade by two- or threefold. Bangladesh, with its large and young population, also wishes to export manpower to Iran, thereby giving another dimension to trade between the two countries. Tehran has assured Dhaka of looking into this once sanctions are eased.

Furthermore, there is great potential for Iran to increase its clout in the energy sector. After signing the nuclear deal, Iran has expressed a desire to increase the scope of a gas pipeline, speaking of its intent to now construct it not only to Pakistan, but also to Bangladesh. Indeed, Bangladesh’s power, energy and mineral resources minister was recently invited to Tehran to discuss the specifics of extending the pipeline to Dhaka. Iran has already indicated that it is willing to offer Bangladesh a “special rate” on crude oil imports. Tehran has also promised to discuss rebuilding and increasing the capacity of Bangladesh’s sole oil refinery, Eastern Refinery, which was in fact originally built with assistance from Iran. Iran can greatly increase its role in Bangladesh’s energy industry not only by improving Eastern Refinery, but by serving as a critical partner in developing Bangladeshi oil fields discovered in the northeastern district of Sylhet. Iran’s interest has grown in Bangladesh’s energy sector, and the development of Bangladesh’s fledgling oil industry is sure to be on the agenda in any diplomatic talks between Tehran and Dhaka. Iran’s support may also be crucial for Bangladesh to develop its offshore natural gas reserves, which play a significant role in Bangladesh from fueling cars and lighting stoves to powering the country’s agriculture sector—meeting 56 percent of the country’s energy demands. In a country where around 40 percent of the population has no access to electricity—and where the agricultural sector employs 47 percent of the labor force and contributes 15.1 percent to GDP, which needs a steady energy supply to operate smoothly—the impetus to improve energy security could not be greater in Bangladesh. Iran’s early steps will give it an advantage in navigating Bangladesh and in staking out a claim in the country’s growing energy sector.

Apart from more oil and gas, Bangladesh has displayed an interest in nuclear energy, an admittedly touchy subject for Iran. In 2007, Bangladesh’s government requested assistance from Tehran in developing nuclear reactors to fuel the country’s huge energy needs. While Bangladesh has looked toward Moscow for technical support in building its two 1200-megawatt nuclear reactors, Iran may plausibly show interest in building more nuclear infrastructure in Bangladesh—and particularly as the energy needs of Bangladesh are projected to increase, thanks to a rapidly growing economy. Dhaka’s increased cooperation with Iran may soon extend to the nuclear energy sector, thereby making Tehran’s partnership even more vital.

These increased convergences between Tehran and Dhaka should not be surprising, given the history that these countries share. Ever since President Rafsanjani’s visit to Dhaka in 1995, relations between the two countries have been on the ascent—including on unofficial, person-to-person levels. A coterie of Bangladesh’s doctors has been trained in Iran, for example, while Iran has a cultural center in one of Dhaka’s most exclusive neighborhoods, Dhanmondi.

Additionally, while Bangladesh’s population is overwhelmingly Sunni compared to Iran’s overwhelmingly Shia one, this has not deterred the two countries from discussing ways and means of increasing what they describe as “Islamic cooperation.” Iran’s cultural presence in Dhaka is quite robust. Screenings of Iranian-produced movies appear on state-run Bangladesh television, and large numbers of Iranian novels (translated from Persian) are available in bookstores.

Iran’s presence in Bangladesh will only grow, thanks to the Iran nuclear deal—an accord that sets a course for Iran to be more closely connected with the world. Bangladesh is hungry for global partners to help increase its economic footprint, and Iran is a natural, tried-and-true partner considering the rapport the countries already share. Javad Zarif’s recent visit is just the latest chapter in a long story of cooperation between the two nations. Iran’s increased cooperation with Dhaka may just be the start of its efforts to court more influence in other South Asian capitals—from Delhi and Islamabad to Male, Colombo, Thimphu, and Kathmandu.