With Bannon Gone, Will the Establishment Triumph? 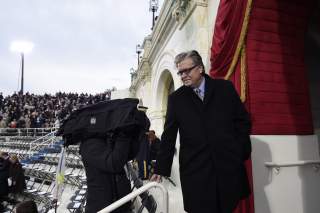 The former White House chief strategist concluded his tenure Friday with the president almost a year to the day that he took over the then-Republican nominee’s beleaguered campaign. Judging by the social-media activity of some of his old colleagues at Breitbart News, he may return to that outlet and launch a full-scale offensive against his old enemies in the White House: Jared Kushner, Ivanka Trump, Gary Cohn, H. R. McMaster and national security official Dina Powell. He may also become involved in leading a new, well-funded venture backed by the powerful Mercer family.

Whether this means Bannon, and the national populist movement that reveres him, is actually done with this president is less clear. It’s entirely possible Friday’s news could be looked back on as a positive turning point for the anti-establishment forces that got Trump elected president. Bannon, “unchained,” could be more valuable to the president as a firebreather on the outside than as an inexperienced government hand that offends swath of Trump’s family on the inside. It’s perhaps underemphasized, but in the eight months as the president’s off-and-on Svengali, Bannon’s personal record of directly delivering legislative achievements was lacking. He notably failed to persuade the hard-right House Freedom Caucus to play ball on health care in one particularly brutal March exchange. Writer Yashar Ali floats the possibility that Bannon could become Trump’s Dick Morris, potentially covertly saving Trump’s presidency at a dark early hour just as the controversial New York political consultant did for Bill Clinton. Roger Stone, another colorful political consultant (who sometimes has Trump’s ear and also used to work for him), laid out the case earlier this week in the Daily Caller that Bannon was essentially self-serving in the White House and it was time for him to go. Stone was quick to make the point he was by no means on the side of establishment forces like McMaster, either.

But other indications suggest a future acrimonious between the divorcing parties. A quick dismissal is a far cry from what Bannon was floating just after the election. “If we deliver,” on this new nationalism, “We'll get 60 percent of the white vote, and 40 percent of the black and Hispanic vote and we'll govern for 50 years,” he told the Hollywood Reporter last November, after Trump’s shock victory. Flash forward to August 2017: “With Steve Bannon Gone, Donald Trump Risks Becoming Arnold Schwarzenegger 2.0,” reads the first article on Breitbart News during Bannon’s free agency. Brexit leader and Trump associate Nigel Farage registered his disappoint over the departure of Bannon, “his friend.”

Additionally, the intellectual infrastructure meant to defend Trumpism also showed signs of dissipating even before the formal announcement on Bannon. Julius Krein, the “wunderkind” founder of American Affairs Journal, who sat down with the National Interest to defend Trump in June, announced in the New York Times on Thursday, to a mixture of snickers and sympathy, that Charlottesville was the last straw for him, and that he fully regretted his vote for the New York mogul. What will Krein and ilk do now? “Those who found some admirable things in the hazy outlines of Mr. Trump’s campaign—a trade policy focused on national industrial development; a less quixotic foreign policy; less ideological approaches to infrastructure, healthcare and entitlements—will have to salvage that agenda from the wreckage of his presidency. On that, I’m not ready to give up,” Krein wrote. One of Krein’s former collaborators during election, Michael Anton, now works at the National Security Council, but Anton’s future, post-Bannon, was also thought to be in peril on Friday.

But most notably, some raise the specter of a direct challenge by Bannon against his old boss. The semi-exiled provocateur Milo Yiannopoulos resurrected calls for “Bannon 2020” on Friday. Stranger things have happened. Ditto Raheem Kassam, editor-in-chief of Breitbart News London and Farage ally, tweeting a “Bannon 2020” graphic. “Bored of talking about myself, this is now a Steve Bannon fan page,” Yiannopoulos, who used to work for Bannon at Breitbart News, commented on Facebook. “Bannon for President. Not that we don't love you, Daddy.” For the uninitiated: “Daddy” is what Yiannopoulos, has long called the president. Damon Linker, a senior correspondent at the Week, suggested that Bannon would more likely attempt to find a new, perhaps younger apprentice: “The next person Bannon backs will be the one to realign the parties,” he tweeted, floating Trump’s election as merely a first iteration of a larger historical shift.

Also very possible is some sort of middle ground. Bannon’s relationship with Trump is certainly fraught, but Trump has quietly reconciled and accepted the counsel of fired employees in the past, such as Stone and inaugural campaign manager Corey Lewandowski. “We still have Stephen Miller and Jeff Sessions,” Antiwar.com editor Justin Raimondo, who prominently backed Trump on the basis of his non-interventionist rhetoric during the campaign, tells me. “But the big gun has been stilled,” he says, meaning Bannon.

Raimondo alludes though to possible successors, ideological or otherwise. Trump in recent weeks and months took issue with even Bannon’s job title—chief strategist—though one would presume the president originally signed of on it. “I’m my own strategist,” the president said in April. Will Trump even fill Bannon’s job?

But one name that comes up in Stephen Miller, seen as intellectual force in his own right. Sources in Trump’s orbit have complained to me that the supposedly ironclad nature of Miller’s relationship with Bannon has been overstated. Miller is a former Senate aide to Sessions, and did not come up through the Breitbart News world. But he has impressed many on the nontraditional right, and his bellicose defense of immigration restrictionism cemented Miller’s reputation as a fellow traveller. Might Miller stand to inherit Bannon’s mantle in some way? And unlike Bannon, Miller (though decades younger) has years of direct experience in government; he and Sessions helped shut down immigration reform in 2013 when Sessions was a senator. He has also cultivated a superior relationship with Ivanka Trump and Jared Kushner, though the latter was close to Bannon during the campaign before seeing that relationship markedly decline during the administration. Miller was floated for communications director earlier this month, only to seemingly lose out to Hope Hicks. Perhaps the president had a bigger role in mind.

Democrats and liberal groups seem aware. In the wake of the president’s arguably-bungled response to the mayhem in Charlottesville, the left is mounting a pressure campaign for a full purge of nationalists. The president—and, notably, the vice president—have stood by every word of Trump’s controversial press conference on Tuesday. But it’s possible, fair or not, that the administration’s enemies will see Bannon’s departure as a tacit admission of wrongdoing—and evidence that hardball tactics work. “1 firing is not enough—Trump must fire more,” the Progressive Change Campaign Committee demanded in an email Friday. The Democratic National Committee concurred, calling for the heads of Miller and Sebastian Gorka. Anton has also sometimes been roped in as an ideological kindred of these folks. Gorka formally works in the “Office of the Chief Strategist.”

The chief strategist, of course, has left the building.