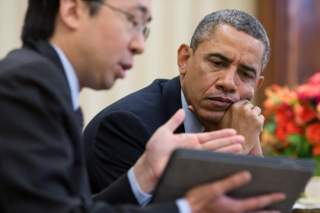 If presidential elections are largely referendums on the White House incumbent or incumbent party, as I have argued in these spaces and in my most recent book, Where They Stand, then the man who will exercise the greatest impact on the outcome of next year’s general election is President Obama. If his second term is adjudged by the American people to have been successful, then Democrats likely will retain the White House; if not, they won’t.

Under this analytical thesis—which, I acknowledge, raises skepticism among some political scientists, political journalists and political professionals (but they’re wrong)—presidential elections don’t turn on frivolous matters such as candidate gaffes, clever slogans or negative ads. Rather, the electorate operates on a higher plane, sorting out the unimportant debris of campaigns and rendering decisions based mostly on more fundamental questions of national direction and the performance of the incumbent (or incumbent party). In other words, there is a collective judgment in the electorate that emerges at the end of campaigns and brings a certain logic to the process.

That logic turns on serious matters of governance—the state of the economy, the position of America in the world, the degree of presidential initiative, and the like. The most serious lapses that, in combination, bring down presidents or parties in power are these: a sputtering economy and lack of per capita income growth; lack of any serious and successful initiative in domestic affairs; lack of any serious accomplishment in foreign relations; a serious foreign affairs fiasco; serious scandal that reaches the upper levels of government; and sustained civic unrest that leads to blood in the streets.

These tests are explored by Allan J. Lichtman and Ken DeCell in their book, The 13 Keys to the Presidency. The authors also note that, when parties in power lose House seats from a baseline of the previous midterm elections, that tends to erode their standing as well.

Assessing Obama’s second term through the prism of these tests, we can say that he is challenged on a number of them. The economy isn’t sputtering currently (though that could happen before November 2016), but per capita income has declined on his watch. It’s difficult to argue he has brought about any significant domestic accomplishment, in the nature of Lyndon Johnson’s Civil Rights legislation or Ronald Reagan’s new-direction tax policies. One can argue, and Obama supporters often do, that it wasn’t his fault; the Republican Congress just wouldn’t play ball with him. But voters don’t parse these questions in such ways. For them, it’s no excuses; he either produced accomplishments or he didn’t. Obama didn’t.

On the matter of a significant foreign policy triumph, there’s no question that the Iran nuclear deal represents such an accomplishment, assuming that he gets it through Congress (as appears likely). Many would argue that it is a terrible deal and he shouldn’t get any political capital out of it. But, again, that’s not how our system works. The deal represents a major new direction in foreign affairs, and a difficult one to bring off, and the collective electorate takes note of such things. Thus, a net plus.

What about a serious foreign policy defeat or fiasco. There’s no question that the rise of ISIS represents such a development. The 9/11 terrorist attack on America demonstrated that Islamist radicalism represents a serious national threat, and that threat became substantially more dangerous on Obama’s watch. That gets charged to him. The irony is that he didn’t support George W. Bush’s Iraq invasion in part because he didn’t think that Iraqi leader Saddam Hussein was part of the Islamist threat. He was right. And there’s no doubt that the civic chaos unleashed by that invasion contributed to the ISIS emergence.

But the American people already expressed themselves on that matter—by voting against the GOP candidate in the 2008 presidential referendum and by voting in Obama. But Obama took his eye off the ball when he concluded that the challenge represented by 9/11 had dissipated significantly. Now it’s a mess, and it’s his mess.

Scandal? There has been no serious scandal on the Obama watch. It’s possible, perhaps, that Hillary Clinton’s email imbroglio could explode into a full-fledged scandal, with indictments and immunity deals and plea agreements. If so, it will redound to the detriment of the incumbent party. But there’s no particular reason to believe this matter will rise to such a magnitude, and thus it appears that the Obama administration will pass the scandal test without ambiguity. The same with sustained civil unrest, which has not reached a level during the Obama term of political significance. On the other hand, Obama’s party lost five House seats in the four years following the 2010 midterm elections—signifying, according to the Lichtman-DeCell formula, a net negative in this test.

But what about history? How are historians likely to judge Obama over time? Well, we’re not history, so we should be a bit circumspect here. But there are patterns of historical assessment that might enlighten us on this question. First, it should be noted that history judges presidents differently from the electorate. Voters make their assessments in four-year increments. That is, after all, their job—to assess the performance of each term and ask the question: Is this president, or this incumbent party, eligible for rehire based on the past four years?

History, on the other hand, assesses presidents based on their full tenures. Further, history makes judgments on the implications of actions that perhaps didn’t cause problems before the next election but proved problematic in the long term. History’s judgments are more finely tuned, more nuanced, broader in scope. The voters, for example, didn’t care about Reagan’s budget deficits when they reelected him overwhelmingly in highly prosperous times. But history is more inclined to take such things into account and render harsh judgments.

If we break the assessment into broad categories, this might be a reasonable stab at a prediction of history’s judgment:

Mediocre. While recent news does show job growth up and the unemployment rate down, Obama presided over a long economic recovery that never generated serious growth or, for the greatest part of that time, abundant jobs with strong wages. History seldom confers great or near-great status upon presidents who can’t produce prosperity, which requires substantial and sustained economic growth. Obama never fashioned an economic program that could accomplish that.

Abysmal. Successful presidents, the ones favored by history, find ways to get what they want from Congress. Usually this requires a panoply of techniques—cajolery, back-slapping, horse-trading, favors, threats, friendly outreach, little jabs of revenge, and much more. But the biggest requirement for any president in dealing with Congress is getting the American people behind him. That means crafting an agenda that stirs voter interest and support. Obama failed there. When the voters got their first chance to pass judgment on his leadership, they kicked sixty-three Democrats out of the House, and six out of the Senate. That shows that the president failed to get an electoral coalescence behind his program, which means in turn that it was not a well-conceived program. That failure has menaced his presidency ever since.

Middling. As noted above, his second term has produced no serious domestic initiative of the kind that buoys a president’s standing in history. His first term produced the Affordable Care Act, which was a major achievement but remains highly unpopular. Perhaps more significantly, the president’s method of pushing it through Congress—on a strictly partisan vote—probably doomed his chances of bringing to it wide national support within the near future. In the meantime, he has made no effort to address the country’s growing entitlement problem or the ominous debt overhang.

Incoherent. The president, to his credit, sought to move the country away from the aggressive and arrogant George W. Bush foreign policy that wreaked so much havoc in the Middle East. The more important question is whether the world is safer and more stable than when he took office. Unfortunately, the answer is no.

The Middle East has been unraveling throughout his presidency. Relations with Russia have deteriorated. He announced a renewed concentration on Asia, but there has been little to show for it, and China seems bent on gutting America’s decades-long dominance in the region. There doesn’t seem to be a consistent principle guiding the country on when and whether to intervene in places such as Libya and Syria.