Barack Obama Is Still Not a Realist 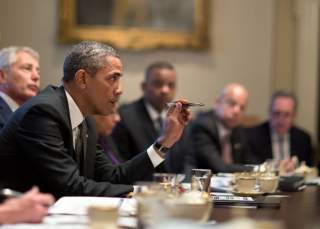 In his West Point foreign-policy address last week, President Obama suggested he is not a realist. Yet some realists have been praising his speech as a statement of realism. They see realist intuitions in his willingness to use force in defense of America’s supreme national interests and in his stated intention to steer America between aloofness and intervention. In seeking the mean between these extremes, these latter-day Aristotles say, the president has found virtue.

This is nonsense. Though it is quite right that neocons remain vigorous, and while there are a few souls who would like to see America withdraw from the world (the strength of the second group is grossly overstated), the fact that there are many fools does not mean that the president is wise. That his foreign policy is not the obvious disaster that George W. Bush’s was does not mean that it is successful. And that he resists the idealism of the neoconservatives and humanitarian warriors while also rejecting isolation does not mean he is therefore a realist.

Realism, after all, concerns itself with the alignment of power in the international system. All other considerations are secondary. And America, a global power with global interests, must give priority to alignment on the global scale. A more regional focus—sufficient for almost every other power—will not do. And it is in these areas most important to realists that the Obama administration has failed most seriously. Indeed, it often appears that the administration gives global dynamics no consideration at all.

How else can we explain the administration’s simultaneous antagonization of both Russia and China, the only two powers who could join the capacity to thwart America with a desire to do so?

Neither country is a natural friend of the United States. Relations with both are bound to be testy. But that does not mean that they should be aligning with each other, as they are now, with the two signing a major gas deal and meeting at the highest levels. By merely reducing tensions between each other, the two gain more freedom of action in dealing with the rest of the world—they don’t have to devote as much energy to worrying about their long shared border. That freedom of action comes at the expense of America’s allies in Eastern Europe and in the Pacific, thereby increasing the risks of confrontation.

And if the two major powers actively coordinate—say, if Russia were to lean on its neighbors at the same time that China makes a major push in the South China Sea—America could find itself stretched thin. Disastrous miscalculation—or disgraceful American concession—could follow. Republican worries that Obama has cheapened America’s commitment to its allies would pale in comparison to the concerns that would arise in such a situation. And the great-power confrontations that Obama’s clueless global policy has made more likely? They could lead to disasters that would damage America far more—in dollars and in lives—than Bush’s Iraq adventure.

Indeed, perhaps the only area of foreign policy in which the administration has conducted itself in a realist fashion is in its nuclear negotiations with Iran. Unfortunately, many of its other initiatives have flown in the face of realist intuition. Its Libyan intervention contributed to Russian and Chinese coordination and effectively lengthened the conflict—spreading instability and arms across North Africa and the Sahel. The secretary of defense who presided over that conflict would later say that the Libyan situation prior to intervention “was not a vital national interest to the United States.” It has continued the Bush administration’s civilizing mission in Afghanistan long after that country had ceased to be Al Qaeda’s principal base. It launched a quixotic bid to bring peace to Israel and Palestine when neither party was particularly eager to negotiate and when a range of crucial issues were crying out for American attention. And the administration has behaved, in crisis after crisis, as though words, not power, are the coin of the realm in foreign policy.

Realists shouldn’t see the West Point speech as an utter disaster, of course. Its emphasis on shifting more defense burdens onto allies has been compared favorably to the Nixon Doctrine. Yet though the administration’s foreign policy may contain some realist elements, a few trees do not make a forest. The president implied he wasn’t a realist. We should take him at his word.