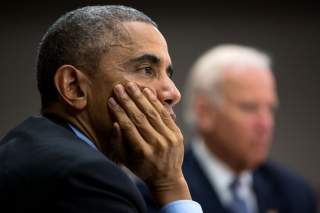 Had the Obama years turned out differently, the President’s recent remarks to the Congressional Black Caucus might have been forgivable, or at least forgettable. “I will consider it a personal insult, an insult to my legacy,” he informed, if the African-American community “lets down its guard and fails to activate itself in this election.” In the current climate, however, President Obama’s comments, whatever their impact on the November elections, are likely to aggravate race relations.

To appreciate the significance of Obama’s remarks, it bears mentioning Obama’s path to the presidency. In the forty years before Obama’s election, a succession of vice presidents and governors ascended to the Oval Office only after decades of scrutiny in the public arena.

Obama was judged by a different standard. The journey from Columbia University to Editor of the Harvard Law Review to an appointment on the University of Chicago faculty is typically littered with scholarly publications, clerkships and other professional accolades. In Obama’s case, the most conspicuous items on his resume were two autobiographies — both about his racial identity — and an unremarkable stint in Illinois politics.

Yet it was on this basis that America gambled on Obama. What reason was there to catapult an anonymous state senator into the presidency within a span of four years?

Much of the rationale for Obama’s candidacy mirrored the arguments frequently proffered for affirmative action programs. The inclusion of minorities in our highest positions of power, we’re often told, will produce racial progress once minorities see that they have a place in American society, and once whites are persuaded that minorities can be integrated on equal terms.

Enter Obama. After a string of failed African-American candidates for President, Obama was the first who seemed to have the right temperament and intuitions. He inspired minorities without resorting to the crude racial politics of Jesse Jackson, Carol Moseley Braun and Al Sharpton. Yet he also offered a critique of race relations that appealed to white voters without the alienating conservatism of Alan Keyes.

It was Obama’s 2004 address to the Democratic National Convention, in particular, that transformed him into a national figure. America was willing to tolerate the student councilish platitudes in the speech, for they had finally found an African-American leader committed to a benign vision of post-racialism. So enthralled were the American people that they even overlooked the inspiration behind the speech — Reverend Jeremiah Wright, Obama’s long-time former pastor. This was quite generous. Obama, after all, had disavowed Wright not after his anti-American and anti-Semitic sermons were leaked, but only after Wright’s incendiary interviews in the middle of the campaign became a liability.

Hope prevailed that the era of divisive racial politics were coming to an end. “Is Obama the End of Black Politics?” Matt Bai asked in an August 2008 issue of The New York Times Magazine. Although a member of the Congressional Black Caucus, Bai reported, Obama “never felt he belonged.” The reason was that Obama was part of a new generation of African-American politicians — “he simply wasn’t comfortable categorizing his politics by race.” In light of Obama’s nomination, Bai ventured, black politics “might now be disappearing into American politics in the same way that the Irish and Italian machines long ago joined the political mainstream.”

In November 2008, Bai’s report seemed prophetic. Never mind the feared “Bradley effect” – that voters would say one thing to pollsters and do another in the privacy of the voting booth. Obama outperformed John Kerry among the white vote, and, with overwhelming margins among African-Americans and Hispanics, delivered a landslide victory. The election of America’s “first black president” was celebrated as a sign that the country was overcoming its race problem.

Eight years later, precisely the opposite has happened.

Race relations have deteriorated to an unenviable place. In a July 2016 poll, nearly 70 percent of Americans agreed that race relations are generally bad – a level unseen since the 1992 Rodney King riots.

Partly, these sentiments are symptomatic of how little the Obama administration has ultimately done for African-Americans. It’s true that Obama appointed African-Americans to prominent positions, but in this, he was hardly different from his predecessors, Republican and Democrat alike. On a more fundamental level, economic indicators actually suggest that things have worsened under Obama, among them: the largest wealth gap between blacks and whites since 1989; record levels of black child poverty, and widening racial gaps in college attainment. Perhaps none other than Tavis Smiley summed it up best: black America got “caught up in the symbolism of the Obama presidency,” but “in the era of Obama, have lost ground in every major economic category.”

If the consequences of the Obama years were contained to African-Americans, Obama’s self-reverential assessment of his legacy would merely be out-of-touch. But his comments are particularly troubling against the backdrop of the country’s racial polarization.

On the causes of and solutions to America’s racial divide, black and white views are, to quote a recent Pew finding, "worlds apart." Seventy percent of African-Americans believe that racial discrimination is a major reason why blacks have a harder time getting ahead compared to just 36 percent of white Americans. The groups are divided by a margin of over 40 percentage points on the question of whether blacks are treated less fairly in the workplace and when applying for loans and mortgages. And while 88 percent of African-Americans believe the change is necessary to make equal rights a reality, just over half of white Americans feel the same.

Why, in such a divided country, did Obama choose to inject race, and in such a provocative way?

Perhaps Obama’s views have evolved over the past decade. It’s worth noting that while only 30 percent of African-Americans today believe that the Congressional Black Caucus has been very effective, Obama made no mention of the group’s rather unimpressive standing. Judging by his recent appearance, whatever discomfort he felt with the Congressional Black Caucus as a senator has apparently dissipated.

Either way, Obama, at the Congressional Black Caucus, exploited the double standard he was supposed to end. He did so because he understands that no matter how explicitly he appeals to black voters on the basis of their alleged group interests, it would be unthinkable for his Republican counterparts to play by the same rules. Republican candidates, Tea Party activists, and Trump supporters, he knows, are routinely smeared for alleged “dog whistles” far more subtle in their appeals.

If Obama’s goal is simply to elect Hillary Clinton, his speech might deliver the turnout she needs. With Obama’s approval rating among African-Americans standing at 90%, vindicated are those who argue that racial solidarity, more so than policy outcomes, drive African-American political sentiments.

Regardless of the outcome in November, though, Obama is playing with fire. It’s an open question whether America’s shrinking white majority will continue to tolerate a double standard that diminishes its grievances, but condones explicit racial appeals to African-Americans. For how long will this patience last when the Democratic nominee taunts them as a "basket of deplorables"?

The 2016 elections are already showing signs of discontent. Consider exit polls from the South Carolina Republican primaries — the contest that has voted for the eventual nominee in all but one cycle since 1980. Compared to those who voted for establishment favorites Marco Rubio and John Kasich, Trump supporters regret, in retrospect, the 1948 decision to desegregate the armed forces. And only 69% of Trump backers take issue with the claim that whites are a superior race, compared to about 90 percent of Kasich and Cruz supporters. The Trump phenomenon may not be attributable to white backlash, but these polls are at least suggestive.

Events in the run-up to Obama’s Congressional Black Caucus speech are also revealing. A week earlier, three white nationalist leaders vowed to professionalize their movement at a press conference at the Willard Hotel in Washington DC. That meeting followed on the heels of a much-noted speech by Hillary Clinton condemning the rise of racism in the conservative movement. Contrast this turn of events with the mood on the eve of Obama’s election in 2008; as the New York Times reported, white supremacists were “paralyzed and at a crossroads in what would presumably be a pressing moment of action.”

Even in the elite universities that Obama once attended, there are signs of upheaval. Last week, The Harvard Crimson published an editorial taking issue with the university’s affirmative action policy. The editorial called for “more nuance in affirmative action” and “greater scrutiny of Harvard’s admission process” to address the costs of black preferences on higher-scoring applicants of other races. At least in this respect, the views of the Crimson editors are in line with white Americans, less than four percent of whom believe that race/ethnicity should be considered major factors in the college admissions process. The Harvard editorial follows a controversy at the University of Chicago, where the Dean of Students, in a letter to incoming students, denounced “safe spaces” and “trigger warnings” as an unreasonable accommodation of minority sensitivities.

Perhaps the expectations placed on Obama were unreasonable at the outset. But even if Obama cannot solve America’s race problem, the power of the presidency ensures that he can make it worse. So far, he has.

Pratik Chougule serves as Managing Editor of The National Interest.