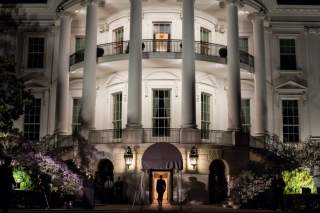 Barack Hussein Obama may have been trying to sound like Ronald Reagan in his statement on confronting the Islamic State in Iraq and the Levant, but President Obama is no Ronald Reagan—and both the American people and international audiences know it.

First, when President Reagan promised to take action against the Soviet Empire, he was addressing a threat that did not arise due to his own actions.  Reasonable people could disagree about Reagan’s policies, but they could not blame him for the Soviet threat.

Not so in Mr. Obama’s case.  It is almost certain that ISIL would not have become a serious force—and might not even exist—without Obama’s flawed policies.  It was Obama’s decision not to leave a residual force in Iraq that enabled former Prime Minister Nouri al-Maliki to act on his deeply divisive authoritarian and sectarian temptations.  The absence of a U.S. military presence in Iraq was likewise detrimental to both the Iraqi army’s capabilities and its will to resist initially small and poorly armed, albeit highly motivated, ISIL troops.  Obama’s excuse for this was that he could not keep a residual force in Iraq because Maliki would not sign a status of forces agreement granting immunity to U.S. personnel in Iraq, but former senior U.S. officials from his own administration argue that the President did not seriously try to negotiate an agreement.  Instead, he used Maliki’s objections as an excuse to act on his own desire to withdraw completely from Iraq.

Moreover, ISIL would have been unlikely to develop the momentum it did without a sanctuary in Syria.  Although President Bashar al-Assad and the nature of his Alawite regime’s minority rule are principally responsible for the rebellion in Syria, Obama’s declaration early on that Assad had to go gave a false encouragement to the opposition and contributed to the country’s bloody civil war.   It also led neighboring states, particularly Turkey, to support the insurgency and precluded agreement between Assad and the rebels by discouraging the opposing from accepting anything short of the dictator’s surrender.  After all, why should the opposition support a settlement if no less than the President of the United States announces that Assad’s removal is imminent and inevitable?  The Syrian opposition, Turkey, and almost everyone else in the region thought that Obama meant it when he said Assad had to go; now we know that Obama said this without any serious analysis of the insurgents’ capabilities or the nature of the opposition coalition and the relative strength and philosophies of its various components.  Most important, in retrospect the president’s statement was clearly devoid of any real intent to do much of anything to provide military help to the rebels.  This provocative but empty talk makes Obama the polar opposite of Reagan.

Obama’s new sweeping pronouncements are dangerous.  If they don’t prove hollow, further discrediting the United States in the process, they compel him to put the United States in very dangerous territory.  Obama appears to think that he can threaten to do anything, anywhere, against American enemies without any consequences for what he says, does, or doesn’t do.  It is precisely because Obama is weak that he has a propensity for offering sweeping inflammatory pronouncements that deter no one but can be exploited by anyone looking for an excuse to disregard sovereignty of others whether in Ukraine or elsewhere.

But imagine if Russian President Vladimir Putin—who likes to use U.S. actions as precedents for his own conduct—paraphrased Obama: “We will hunt down terrorists who threaten our country, wherever they are.  That means I will not hesitate to take action against ISIL in Syria, as well as Iraq [or Ukrainian fascists].  This is a core principle of my presidency:  If you threaten America [Russia], you will find no safe haven.”  The President made clear not only that he feels entitled to attack ISIL positions in Syria, but that he would do it without any coordination with Assad’s government while simultaneously arming the so-called moderate rebels, who in addition to fighting ISIL are also at war with the Syrian government. The Russian Foreign Ministry has already issued a stern warning that attacks in Syria without UN Security Council authorization would be acts of aggression. The Assad regime, which recently suffered significant setbacks at ISIL’s hands, took a more open-minded approach, but still made clear that it wants to be consulted by U.S. officials before any airstrikes and naturally totally opposes any plan to arm other rebel groups.

The president has promised to “ultimately destroy” ISIL, so does he expect Putin, whom he is busy attempting to isolate and humiliate over Ukraine, to sit idly?  Putin is unlikely to provide S-300 anti-aircraft missiles to Assad, not because of any deference to Obama, whom he reportedly considers an arrogant coward, but because of reluctance to irritate Israel, which refused to vote for a US-orchestrated resolution condemning the Russian annexation of Crimea in the UN General Assembly.  Nevertheless, there are many other governments or groups Moscow can support that would increase threats to America—and some could be more serious than the one we face today from ISIL.

If ISIL is indeed a real and immediate threat to America’s security as Obama has portrayed it, one would expect him to make the struggle against it a paramount American priority. Among other things, that would mean assembling a truly broad coalition to put an end to this evil. Notwithstanding his long record fighting communism, Winston Churchill—whose bust Obama removed from the Oval office—observed that “If Hitler invaded Hell, I would at least make a favorable reference to the Devil in the House of Commons” after Nazi Germany attacked the Soviet Union. When President George H. W. Bush assembled a coalition to liberate Kuwait, he and his administration included Hafez al-Assad’s Syria in the effort. In contrast, one day after his speech about ISIL, Obama announced another round of ineffective but antagonizing sanctions against Russia with no clear objective or rationale.

Putin did not respond symmetrically to the new sanctions, but did bask in public support from Chinese President Xi Jinping and Kazakh President Nursultan Nazarbayev at a Shanghai Cooperation Organization meeting in Dushanbe, Tajikistan.  (Nazarbayev declared that his country would stay with Russia no matter what.) Putin, who is assuming the SCO’s rotating chairmanship, also suggested admitting new members to the group, with Iranian President Hassan Rouhani sitting at his side. Outgoing Afghan President Hamid Karzai also attended, as Russian officials met quietly with remnants of the Northern Alliance, according to some sources. Moscow supported the group for much of the 1990s, and its Afghan clients could make real trouble for the United States in Afghanistan’s current turbulent environment.

In the wake of the brutal murders of journalists James Foley and Steven Sotloff, which triggered Obama’s new focus on ISIL, Foley’s mother has accused the administration of needlessly sacrificing her son due to “a lack of coordination, lack of communication, lack of prioritization.” Unfortunately, she was probably right in an even broader sense, in that the way Obama is approaching the terrorist threat seems to be less about protecting American lives and more about protecting Democratic control of the U.S. Senate. Politics, not results, seems to be the foundation for his policy.

Make no mistake—ISIL is a deadly organization and the United States should deal with it with ruthless determination.  But that should include a sober evaluation of what went wrong, what is likely to work, and what adjustments may be necessary in other areas to ensure that this policy has sufficient priority.  Don’t hold your breath waiting for the president to engage in this kind of heavy lifting.

In contrast to Barack Obama, Ronald Reagan both led a real military buildup and provided real support to insurgents fighting the Soviet Empire and its associates.  Yet at the same time, he quickly accepted the need for diplomacy with the Kremlin—he went so far as to hand write a note to Soviet leader Leonid Brezhnev from his hospital bed while recovering from an assassination attempt.  It wasn’t a reward for bad behavior, it was an integral component of his strategy to deal with another great power with a huge nuclear arsenal.  Obama’s strategy is none of the above: no military buildup, no meaningful use of force, limited help to others, and provocative posturing instead of creative diplomacy.

Editor's Note: Due to recent events, this piece has been updated since its original publication.