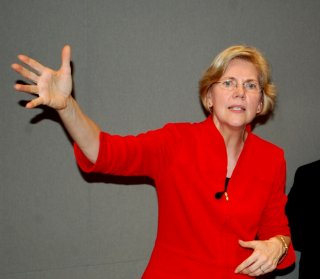 While watching President Obama deliver his seventh State of the Union Address, I couldn't help but wonder whether he was none-too-subtly trying to signal to his fellow Democrats who he might (or more to the point: who he might not) like to succeed him two years from now.

With the exception of the obligatory and ludicrous, foreign-policy section of the speech, Obama’s message was straight out of the Elizabeth Warren playbook: the speech was all about this new and amorphous concept he referred to over and over again as “Middle Class Economics.” This catchphrase masquerading as policy was repeated by the president at least six times during the address. At one point, Obama defined “Middle Class Economics” as:

To be fair, some specifics were forthcoming; the president decried the fact that the United States is the only industrialized nation that does not guarantee paid maternity leave, nor do we require employers to provide for paid sick leave. He demanded a raise in the minimum wage, while also calling for a fairer tax code, one that isn't “riddled” with “giveaways to the super rich.”

He even went so far as to highlight the fact that we now have for the first time a Consumer Protection Bureau, itself largely the creation of one person: Senator Warren. Could it be Obama—like most progressives—wants Warren to make a play for the top job in 2016?

The economic populism the president roundly endorsed on Tuesday also tracks rather neatly with the positions that another potential 2016 candidate has staked out: those of former Virginia Senator Jim Webb. In any case, the president’s emphasis on Middle Class Economics does little to bolster Hillary Clinton’s second attempt at the White House; in fact, it does the opposite, given her and her husband’s long record of support for neoliberal economic orthodoxy. The additional, uncomfortable, yet relevant fact is that the former First Family evinces an almost superhuman capacity for greed. How will she be able to depict herself as a paladin of the middle-class?

Indeed, other high-profile pols like newly minted New Jersey Democratic Senator and Morning Joe fixture Cory Booker, had little to cheer about; Booker looked positively glum as the president spoke of the dangers posed to society by income inequality, which he believes can be addressed by tinkering at the margins with the capital gains tax and closing corporate “loopholes.”

But I thought the most telling moment was when Obama said, “We need to set our sights higher than just making sure government doesn't halt the progress we’re making. We need to do more than just do no harm.” (emphasis added)

Perhaps this was Obama’s way of sending some high and inside heat the way of Bill and Hillary. Some readers (those who got through it anyway) will recall the following scene from Strobe Talbott’s memoir of the Clinton years.

Talbott, who has known the former president since their days as Rhodes scholars, painted an amusing vignette of a final meeting between Clinton and newly installed Russian president Vladimir Putin. In Talbott’s account, Putin repeatedly returned to the principle of “do no harm” because “careful student that Putin was of his visitors file, he probably knew that Hippocrates’ famous counsel was one of Clinton’s own favorite adages.” Putin dropped it so many times that by the end of the trip, an exasperated Clinton complained, “I guess that guy thought I didn't get it the first time…either he’s dense or thinks I am.”

This wouldn't be the first time Obama implicitly chided former president Bill Clinton for playing small ball. Recall that in the 2008 campaign, he pointedly left Clinton off a list of presidents he considered to be “transformational,” a list, after all, that included Ronald Reagan. And if this was Obama’s intent, who could blame him? After all, Hillary and Bill loyalist Leon Panetta wasted no time in criticizing the 44th president upon his departure from the administration.

So above all else, this year’s SOTU left me wondering: is Obama sending a message to Clinton World?

James Carden is a Contributing Editor for the National Interest.