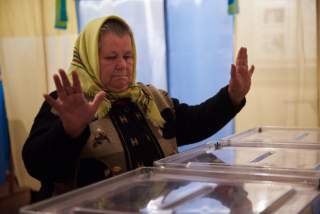 On October 25, 2015, Ukraine held its second election since the November 2013 Euromaidan revolution, this one for local officials. Although technically free and fair, Ukrainian voters were presented with a substantively deficient set of choices, representing their disappointment with the transformation they justifiably anticipated. The Euromaidan activists thought their protest against, and success in replacing, former President Viktor Yanukovych’s government and his authoritarian regime meant the transformation of Ukraine into a European country, hence the name Euromaidan. Indeed, the entire protest was sparked—but not caused—by Yanukovych’s unwillingness to sign the European Union accession agreement he was offered and, instead, to accept President Vladimir Putin’s offer (well, bribe) of cheap gas if he rejected the EU agreement.

Much optimism prevailed after Yanukovych fled to Crimea and then Russia, and once the national elections resulted in the reform-committed coalition government of President Petro Poroshenko and Prime Minister Arseniy Yatsenyuk. The intervening two years have dampened that optimism, to say the least, and tried the electorate’s patience. In fact an overhang of dejection now pervades much of the country (not necessarily an absolute majority) that supported reform. In fact, Poroshenko’s coalition was achieved only by the inclusion of some decidedly anti-reform forces. And now these elections exemplify the growing disillusion.

Out of the over 130 political blocs and “parties” that competed in the elections (excluding the so-called “technical candidates” running individually and mostly as spoilers), only half a dozen contested in more than a third of the oblasts. Only a dozen actively campaigned in two or more oblasts. Prime Minister Arseniy Yatsenyuk now polls so low (about 20 percent approval) that his People’s Front party, which won the highest percentage of ballots cast in the 2014 parliamentary election, today attracts almost no voter support at all and did not even bother to register. In short, the main contestants and therefore the winners, albeit at the local level, were constructs of local oligarchs and political patrons. None of the parties ran nationally. Turnout varied somewhat by region, but nationwide was a bit above 45 percent, about one-third below the 60 percent turnout in the May 2014 presidential election a year and five months ago. The result will be a political process dominated by oligarchs.

In general, and despite the disappointment with the Poroshenko government, pro-reform parties seem to have retained their plurality position in the center and west of the country. Meanwhile, the two parties consisting of Yanukovych former adherents, Nash Kray and the Opposition Bloc, were together the plurality parties in his former eastern and southern strongholds. The only surprise was the “comeback” of former Prime Minister Yulia Tymoshenko, through her Batkivshchyna party.

In part, the lack of national parties is the result of the dependence by parties on the oligarchs for financing, which is in turn dependent on the oligarchs’ interest in securing local monopolies and seats in the Rada to secure their immunity from prosecution. But it is partly also the result of the stalled reform program at the national level, the promise of which energized many previously politically inactive citizens. The Poroshenko reform coalition promised to push domestic reforms which the public came to expect: a judiciary of integrity, an assault on corruption, a reduction in the size of the state, better economic policies, decentralization and above all, a clear plan to reach targets that would warrant integration with Europe—in short, a “European” country rather than a Eurasian one.

But little progress has been made toward those goals. The reduction of the state bureaucracy is still being debated. Corruption levels remain high. The Prosecutor General, an old-school holdover, remains in office while none of the legendary perpetrators of corruption have even been charged let alone prosecuted. The Ministry of Justice’s lustration process is stuck and few corrupt judges have even been arraigned or otherwise disciplined.

No doubt, a government with democratic aspirations should not itself abridge the rule of law in a rush to judgment. But neither can it retain the loyalty of the public when only de minimis tangible progress in these areas (as opposed to commendable efforts on the economic side) has been achieved nearly two years after the Euromaidan. Meanwhile, however, the currency has slumped, unemployment has increased dramatically, inflation has hit hard and pensioners are barely hanging on. The government has its hands full with the economy and financial system in acute crisis, due to massive debts accumulated by Yanukovych, a devalued currency, large unemployment and huge energy bills—all predictable results of the government’s necessary economic reforms, but without compensating perceptible gains elsewhere. So it is hardly surprising that poll after poll reports an acute slide in public support and patience for the new regime.

Without a doubt, the secession of two areas in the Donbass has resulted in loss of Ukrainian territory and sovereignty over these zones, devastated two regions of Ukraine, resulted in Russia’s re-annexation of Crimea, caused thousands of fatalities and casualties, created nearly 1.5 million internally displaced persons, disrupted trade relations between Ukrainians and Russians, resulted in major economic losses, increased unemployment and poverty in Eastern Ukraine and therefore distracted attention from domestic reforms. These are real and serious costs for which the public is willing to grant dispensation. But they do not justify the poor performance on the government’s own political reform agenda. It would have been possible to execute the political reforms notwithstanding these losses. Moreover, the threat of further Russian aggression seems to have dissipated.

So the problem now for Ukrainian aspirations is not so much the threat of Russian interference or further military onslaughts as it is the failure of the new government to perform on the domestic program it promised and which the public expected. In short, to paraphrase Pogo, now the enemy is us.