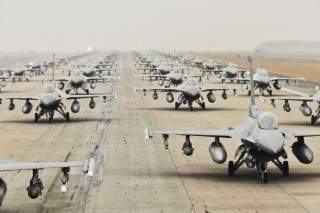 As the United States continues to place tremendous time, energy and resources into its “rebalance” to the Asia-Pacific, many are questioning the military and strategic aspects of this effort. Specifically, many analysts are concerned over the emphasis China has placed on its ballistic- and cruise-missile platforms. If a crisis were to occur, and with so many U.S. and allied bases now in range of Beijing’s growing missile forces, is there a case to be made to “harden” bases that might be in range? Harry J. Kazianis, Managing Editor of The National Interest, spoke to CSBA Senior Fellow John Stillion in an effort to break down this complex issue.

Kazianis: There is a lot of talk about base "hardening" when it comes to American forward-deployed assets in the Asia-Pacific. The fear is that many of these bases would be vulnerable to Chinese missile saturation strikes in the event of a conflict. For starters, what exactly is “base hardening”? Are we talking about just protecting fighter jets or something more?

Stillion: At the outset of the Six Day war in 1967, the Israeli Air Force attacked Egyptian air bases and destroyed hundreds of unsheltered fighter aircraft on the ground. This resulted in immediate and total Israeli air superiority and is widely viewed as an important factor in the rapid Israeli victory. It also illustrated the vulnerability of unsheltered aircraft to surprise attack. Air forces around the world took note and many, including those of NATO, the Warsaw Pact, Iran, the Gulf States and others began to build hardened shelters for their fighter aircraft. These shelters were usually arch-shaped structures with steel or concrete doors. They were generally about three feet thick and could protect a fighter aircraft from anything short of a direct hit by a bomb. This was completely adequate in the pre–precision-guided-munitions era because direct hits on targets this size were relatively difficult to achieve. They look something like this:

This type of shelter is not adequate to protect aircraft from direct hits by precision weapons as shown here:

However, protecting the aircraft is just a first step. Combat aircraft sortie generation can be thought of as an industrial process with the airfield as a “sortie factory.” The factory needs working aircraft, but the aircraft must be able to taxi to a runway that is long enough for them to operate from safely and when they return they must be able to be repaired, refueled and rearmed, and their crews must be able to receive orders and plan missions. This means other parts of the factory must be protected if the base is to function under attack. This means hardening maintenance, fuel storage and distribution and operations facilities. Building shelters to protect aircraft larger than fighters is possible, but cost obviously scales with shelter size.

Kazianis: Are there different degrees to which a base can be hardened? For example, can a base be hardened to such an extent that it can survive most forms of bombardment by Chinese ballistic- and cruise-missile strikes?

Stillion: There are. For example, you could harden a base to withstand bombardment with submunition warheads. This would be much less expensive than hardening the base to withstand attack by large, unitary warheads. Submunition warheads allow much larger areas of the base to be attacked per warhead, so hardening against them would force the attacker to use more weapons per attack to achieve the same level of damage.

Kazianis: Japan is also in range of Chinese missile forces. If a Japan-China conflict were ever to occur, presumably Japanese and U.S. bases on Japanese territory would be in Beijing's crosshairs. What is the state of Japanese forces when it comes to their levels of hardening bases?

Stillion: Japan has a number of bases with hardened shelters, but most of them were built during the Cold War. They tend to be in northern Japan, as they were primarily a response to the possibility of Soviet attacks against Japan.

Kazianis: How expensive is it to effectively harden a base? I have been told, for example, by one anonymous source at the U.S. Department of Defense that just one large base in the Pacific would cost "billions and billions of dollars." In your view, is that correct? If it would cost so much, is the payoff worth it?

Stillion: It depends on how effective and extensive you want the hardening to be. In general, bases within range of enemy fighter-bombers’ attacks would likely be subject to barrage attacks using ballistic missiles armed with submunitions. These would destroy any unsheltered aircraft and spread millions of sharp metal fragments across the runways and taxiways. This would also prevent any aircraft inside shelters from leaving until a path was cleared through the debris (known as FOD—Foreign Object Damage). This could be a time-consuming and laborious process. In the meantime, the enemy might conduct follow-on attacks using cruise missiles and manned aircraft with precision-guided weapons to target fuel storage, runways and aircraft in their shelters, rendering the base unusable until extensive repairs were undertaken.

At longer distances beyond the maximum range of manned aircraft, enemy forces would probably have to rely on missiles alone. In this case, they could still destroy large numbers of unsheltered aircraft with submunition warheads, shut down the base for some period of time and reduce sortie generation rates periodically, but they would lack the ability to cause extensive, long-term damage. The key to operating effectively in the face of a credible precision-strike threat is to find a combination of hardening, dispersal, rapid repair capability, active defenses (like Patriot and THAAD) and distance from the threat that allows sustained, efficient operation of the “sortie factory.” Range is key, because the closer one is to the threat, the greater the weight of fire the adversary can deliver and the harder and more heavily defended the base must be. At some point, if an adversary is capable and competent enough, and the base is close enough, it may not be possible to operate efficiently no matter how hard and heavily defended the base may be.

Kazianis: If U.S. and/or allied forces did start hardening bases close to China, would Beijing view that as an escalatory step? Does this create an even deeper security dilemma for both sides?

Stillion: In general, investing in inherently defensive measures like hardening tends to increase crisis stability and reduce the security dilemma. If both sides had nothing but defensive weapons, then there would be no security dilemma. Defensive measures increase crisis stability by 1) reducing confidence on the part of the attacker that preemptive “knock-out” blows will succeed and 2) reducing the tendency of the defender to view the defended systems as “use it or lose it” assets.

Kazianis: And for my final question: All of this presumes that Chinese ballistic and cruise missiles that would target allied bases in a conflict are highly accurate and that the crews that would fire them are well trained. In your opinion, how accurate are the various Chinese missiles that could hit U.S. or allied bases, and what is the level of training of these forces, the much-discussed second artillery, that would carry out such strikes?

Stillion: The short answer to these questions is I don’t know for sure. However, there is considerable evidence that the 2nd Artillery is a capable and competent military organization. For example, it is entrusted with delivery of nuclear weapons. More broadly, prudent defense planners should assume adversary weapons will work “as advertised” and their crews will be competent. When a conflict occurs, if the enemy’s equipment turns out to perform poorly or the personnel are incompetent, so much the better. If, on the other hand, your plans assume a poorly trained and equipped adversary and this turns out to be wrong, the price could be quite high in lost lives, equipment and territory.