The Battle of Hagia Sophia: Erdogan’s Conquest of the Turkish Republic 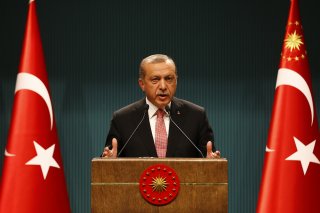 Turkey’s Islamist president Recep Tayyip Erdogan has a reputation for turning challenges into opportunities. At a time when electoral support for his Justice and Development Party (AKP) has hit rock bottom in the polls, Erdogan pulled off his most daring trick to date by converting Istanbul’s sixth-century Byzantine church Hagia Sophia into a mosque. As the Turkish president and his ultranationalist allies celebrate the move as the latest in a series of Turco-Muslim conquests in the region, they are fundamentally transforming the Turkish state’s relationship to its citizens. This will set a dangerous precedent, emboldening supremacists not only in Turkey but also in the Middle East and North Africa.

In announcing the July 10 ruling of an administrative court that paved the way for transforming Hagia Sophia’s status from a museum into a mosque, Erdogan said that the building’s conversion would gratify “the spirit of conquest” of Mehmet II, the Ottoman sultan who captured Constantinople from the Byzantines in 1453. Erdogan’s ultranationalist coalition partner Devlet Bahceli echoed the Turkish president the next day by proclaiming that the course of the Turco-Muslim conquest, “which has been going on for 567 years, has entered a new phase.”

Turkey is unique among NATO’s thirty member states for having a government that continues an active campaign of conquest against its own population and their worship halls. Ironically, it was this very dichotomy between Muslim conquerors and their conquered subjects that Mustafa Kemal Ataturk, Turkey’s founding father, was trying to abolish as he built a secular republic from the ashes of a failed empire. His 1934 transformation of Hagia Sophia from a mosque into a museum was the most symbolic expression of this new spirit, as Muslims, Christians, and others would enjoy access to this monument on an equal footing as former imperial subjects turned equal citizens of a burgeoning republic.

Sadly, the republic failed to deliver fully on its promises, neither securing freedom for nor freedom from religion for all its citizens. Although the Turkish constitution has enshrined the principle of secularism and equal citizenship regardless of ethnicity or religion, the country’s Sunni Muslim majority remained a privileged caste, as religious minorities learned to live with the de facto hierarchies imposed on them by a sinister sectarianism that permeated the entire political spectrum and government bureaucracy.

The idea of equal citizenship, nevertheless, has remained a powerful principle that Turkey’s religious minorities and their pro-secular Muslim allies could time and again turn to for demanding rights and pushing back against discrimination. The Turkish republic, with all its shortcomings, continued to inspire others in majority Muslim countries to challenge sectarian hierarchies and demand the building of secular polities. One of the biggest impacts of Erdogan’s conversion of Hagia Sophia and deployment of the trope of conquest will be to turn back the clock of secularism and equal citizenship in the very country where this ideal started most forcefully in the Muslim world.

This radical rupture in consciousness was best expressed by Elpidophoros, the archbishop of the Greek Orthodox Archdiocese of America—and a native of Istanbul—as he warned that “a mentality of the conqueror, and claiming conqueror’s rights . . . changes the relationship of the state to its citizens.” He added, “I am a Turkish citizen myself, and I don’t want the state to have the mindset of the conqueror, because I am not a conquered minority. I want to feel in my own country as an equal citizen.”

Archbishop Elpidophorous and his fellow Greek Orthodox citizens in Turkey, who now number less than two thousand, are not the only ones who feel subordinated. Many pro-secular Muslims, whether they are religious or not, feel that with his latest stunt, Erdogan has also relegated them to a conquered minority. The simple act of supporting Ataturk’s Hagia Sophia decision and opposing Erdogan’s conversion suffices to demote a citizen to the status of a subject that needs disciplining if not punishment. A deputy leader of the AKP, for example, accused such people of acting like “the Byzantines among us,” insinuating they are traitors. Similarly, Bahceli referred to them as “remnants of the Byzantines” and the “clandestine Byzantine lobby’s Westophile native collaborators.”

The Erdogan government’s Hagia Sophia policy and rhetoric have not only intimidated and marginalized Turkey’s religious minorities and pro-secular Muslims but also emboldened the Turkish president’s Islamist support base. Three days after Hagia Sophia’s conversion, an Islamist weekly owned by a pro-government media group called for reinstating the caliphate abolished in 1924 by none other than Atatürk, reinforcing the pro-secular opposition’s long-running accusations about Erdogan’s hidden agenda to bring back the Ottoman Empire. Although an AKP spokesperson was quick to deny any plans to change the regime’s “democratic and secular” qualities, Turkey’s pro-secular opposition saw this as a potential step Erdogan might take once he feels the time is right.

To make matters worse, Erdogan’s messaging emboldens not only his loyal followers at home but other Islamists around the world. A Jordanian professor, in declaring his support for Erdogan’s conversion of Hagia Sophia on a Muslim Brotherhood channel, claimed that Ataturk was a crypto-Jew and added, “If we liberate Palestine tomorrow, will we leave the Jewish synagogues intact? No! We will uproot them, along with their people, and throw them into the sea. Allah willing, it will be soon.” In addition to the Muslim Brotherhood, Erdogan’s conversion of Hagia Sophia also received messages of endorsement from a motley crew, including Hamas and Iran, notorious for their use of terrorism to advance their respective Islamist agendas.

The inspiration for the Jordanian professor’s statement is likely the Turkish president’s promise a week earlier during his announcement of Hagia Sophia’s conversion that “the resurrection of Hagia Sophia heralds the liberation of the al-Aqsa Mosque” in Jerusalem. Erdogan, in his usual opaque style, when it comes to such delicate matters, left it vague as to what this act of liberation would entail.

The first Friday prayer Erdogan held at Hagia Sophia on July 24, however, showed the limits of the appeal of Erdogan’s conquest rhetoric beyond his Islamist circle. Despite the fact that he invited a long list of notables from around the world, including Pope Francis, there were no world leaders, Muslim or Christian, who agreed to partake in his spectacle. It did not take long for the Turkish president to realize that his Hagia Sophia policy and rhetoric were a public relations disaster, further undermining his tarnished image. On July 28, Erdogan’s communications director tweeted in Greek the steps Erdogan’s Turkey has taken “to preserve cultural and religious diversity,” sharing a video of Greek Orthodox individuals and other minorities who declare how good everything is in Turkey. This was reminiscent of the 2018 statement that Turkey’s non-Muslim minorities issued denying that they faced any oppression in the country, echoing similar statements Iran’s Jewish citizens need to issue on a regular basis.

Erdogan’s propaganda machine will without a doubt continue to disseminate sound bites praising how perfect interfaith relations are in Turkey. These window-dressing attempts, however, cannot undo the lasting damage the Erdogan government’s Hagia Sophia policy and rhetoric has done to the idea of equal citizenship in Turkey and elsewhere in majority Muslim countries. The world still remembers vividly the recent destruction and forced conversion of religious minority sites in Iraq and Syria by jihadists armed with a conquest mentality. The last thing the volatile region and its vulnerable minorities need is fueling of supremacist sentiments and setting extremism into motion.

Aykan Erdemir is a former member of the Turkish parliament and senior director of the Turkey Program at the Foundation for Defense of Democracies. @aykan_erdemir.