The Battle Over Trump's Ukraine Transcript 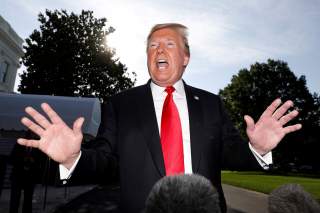 The Ukrainian press is referring to the hubbub over President Donald Trump and Ukraine as the “Monica Zelensky scandal.” Now that Democrats have launched an impeachment inquiry, the furor over Trump’s dealings with Ukraine is increasing. This morning the White House issued a transcript of Trump’s conversation with Ukrainian president Volodymyr Zelensky. Now, Joseph Maguire, the acting director of national intelligence, has apparently threatened to resign unless he is allowed to testify as he deems fit before the House Intelligence Committee. He is scheduled to testify tomorrow morning.

The thirty-minute conversation is recorded on a redacted page of a five-page document, one which alerts readers that it “is not a verbatim transcript of a discussion. The text in this document records the notes and recollections of Situation Room Duty Officers and NSC policy staff assigned to listen and memorialize the conversation in written form as the conversation takes place.”

The phone call took place four days after Zelensky’s party won a majority in the Ukrainian parliamentary elections, and the purpose was ostensibly for Trump to offer his congratulations.

“I would like you to do us a favor though because our country has been through a lot and Ukraine knows a lot about it,” says Trump. “I would like you to find out what happened with this whole situation with Ukraine, they say Crowdstrike . . . I guess you have one of your wealthy people . . . the server they say Ukraine has it.”

This is a reference to the origins of special prosecutor Robert Mueller’s investigation, which used information provided by the Ukrainian government. This information contributed to the prosecution of Trump campaign chairman Paul Manafort. During the call, the president proceeds to mention the “incompetent performance” the elderly Mueller gave testifying before Congress. Today, at the United Nations, in a press briefing with Zelensky, Trump responded to a question about Hillary Clinton’s missing emails by observing that he believes they may well be located in Ukraine.

Trump alludes several times to Biden and the allegation that the former vice president worked to fire the former general prosecutor of Ukraine to prevent an investigation into his son’s business dealings. “The other thing, there’s a lot of talk about Biden’s son, that Biden stopped the prosecution and a lot of people want to find out about that so whatever you can do with the Attorney General would be great. Biden went around bragging that he stopped the prosecution so if you can look into it . . . It sounds horrible to me.”

Zelensky assured Trump that there was a new general prosecutor getting appointed in September, who will be “100% my person, my candidate.” Reiterating that his goal is honesty in government and preventing corruption, Zelensky asks Trump to provide the Ukrainians with any information that may help the investigation. Trump says he’ll have Giuliani and Attorney General William Barr contact him.

The president’s domestic opponents aren’t receiving the story as lightheartedly. CNN editor-at-large Chris Cillizza said the call “is pretty darn close to a smoking gun.” House Democrats are complaining that what was released isn’t a real transcript but a partial summary and are still demanding to see the unaltered whistleblower complaint that started this whole thing.

Even some Republican senators, members of the body that would likely acquit Trump after a probable impeachment by the Democratic House, are jumping ship before they even know it’s sinking. Mitt Romney (R-UT), who two days ago Trump mocked for his defeat in the 2012 presidential election, said, “Clearly what we've seen from the transcript itself is deeply troubling.”

One anonymous Republican senator, speaking to the Washington Post, called the release of the transcript a “huge mistake.” Mike Murphy, a former advisor to Romney and the late Sen. John McCain, informed MSNBC, “One Republican senator told me if it was a secret vote, thirty Republican senators would vote to impeach Trump.”

Plenty of Republicans are prepared to defend the president’s conduct, however. Lindsey Graham (R-SC) and Rand Paul (R-KY), who often give Trump opposing advice on foreign policy, both agree that he’s in the right. “Wow. Impeachment over this? What a nothing (non-quid pro quo) burger,” tweeted Graham. Paul responded that “Biden is the one who threatened Ukraine’s aid, not Trump, and that has to be investigated.” The upcoming battle over Trump is likely to reveal as much about the Republican as the Democratic party.