The Battle for the Soul of Trump Foreign Policy 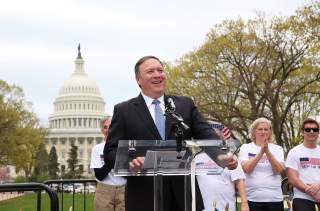 President Donald Trump heads to Camp David Saturday amid an inflection point in his presidency.

This week, he officially declared for re-election, swapped defense chiefs and called off a strike on Iran he himself called “disproportionate.” On Saturday, as the news broke that Fox host Tucker Carlson was critical in persuading the president against military action, Trump revealed to Margaret Talev that his joint chiefs head, Gen. Joseph F. Dunford, Jr., was also against striking the clerical regime. Trump called Dunford “great,” and appeared to throw a life preserver to his beleaguered national security advisor, John R. Bolton, who favored a strike. Bolton is “definitely” a “hawk,” the president said, but still enjoys his confidence.

Someone whose confidence Bolton does not enjoy is Carlson, a rival for Trump’s ear. Carlson, a true believer, took to the airwaves to savage the ambassador Friday night. “John Bolton is a kind of bureaucratic tapeworm,” Carlson said. “Try as you might, you can’t expel him. He seems to live forever in the bowels of the federal agencies, periodically reemerging to cause pain and suffering — but somehow never suffering himself.”

The spat threatens to only heat up. The first two-plus years of the Trump presidency have featured a seeming contradiction: Trump ascended to power by flaying the failures of foreign policies past. Yet, oddly for the trenchant critic of the Iraq war, the president has employed its most prominent remaining defender, Mr. Bolton, and led a hard march against Iraq’s larger, more formidable neighbor, Iran.

That tack made sense in the early going: the president was determined to reverse the legacy of his predecessor, and his fraught nuclear deal, and secure an accord of his own. The Republican old guard had long sought tougher measures on Iran—such as designating a facet of the Iranian military a terrorist organization, as the admin did this spring—and Trump didn’t blink. But the march is running out of road: increasingly, it looks like military exchange on the current course, or a pivot. The president insists all he wants is a new deal.

Many of Trump’s hanger-ons—who have crafted administration policy until now—feel threatened. Hawkish outfits, led by the Foundation for the Defense of Democracies (FDD), the Security Studies Group (SSG), the Center for Security Policy (CSP) as well as the Hudson Institute, have backed—and often staffed the administration—in its first twenty-five months. For this group, a realist capture of the White House is bad news.

“Utterly meaningless words. He’s not actually telling you anything more than he hates the guy. Disappointing total demagoguery,” Dave Reaboi of SSG said Friday of Carlson’s comments. Reaboi and SSG don’t favor a pullout in the Middle East, per se, though they have been critical of U.S. interventions in places such aas in Libya. Instead, they believe the United States should be undaunted in backing its current allies, including the autocratic Saudi Arabia and the United Arab Emirates against: Iran, Turkey, Qatar, Hamas, Hezbollah and the Muslim Brotherhood. America should still take sides in the Middle East, in other words.

“Tucker Carlson’s compass has gone haywire,” said Michael Doran of Hudson. Unlike FDD, CSP and others, Hudson has not dominated staff in the administration. But the establishment conservative outfit has worked with the Trump White House when it could, which for much of the administration, it could. It sponsored a hawkish symposium in fall 2017 aimed at Qatar, in which Steve Bannon keynoted. But Friday, the word was Bannon, a sometime Bolton ally, was tailing back, spooked by an Iran situation he called “very disturbing.”

Will Bolton go? It’s become the critical question of the Trump administration. Even if Bolton were to depart, it’s unclear that would signal a major shift in policy at the National Security Council. Trump hires based on personal chemistry. Last year, he replaced his economic chief, Gary Cohn, over tariffs with an even more virulent free marketeer, Lawrence Kudlow.

It’s possible, I’m told, Trump hires former Gen. Jack Keane, who spoke to the National Council for the Resistance of Iran (NCRI), an affiliate of the MEK, outside the State Department Friday. Keane was unequivocal: “The maximum pressure campaign is working.”

Curt Mills is a columnist for The National Interest.