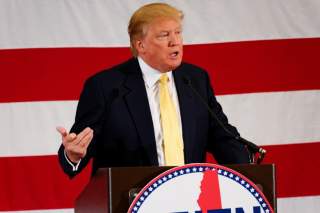 The most revealing moment in the Fox News Republican presidential debate last night was when Donald Trump reacted to loaded questions and oppositional comments about his provocative statements regarding illegal immigration. For a moment the New York real estate mogul looked as if he might actually be feeling some slight quiver of defensiveness over his suggestion that Mexico was fostering this flow of its citizens to America in order to get rid of some of its most undesirable people. Clearly, he didn’t have an answer when Fox’s Chris Wallace asked him to back up his allegation with some hard evidence.

But then the scowl left his face and he declared in a tone of defiance and triumph: “We wouldn’t be talking about this if it weren’t for me.”

This reflected more than just Trump’s absolute conviction that he is utterly correct in everything he thinks or says. The fact is, Trump had inserted the immigration issue into the campaign in a way that most Republicans have been trying to avoid. In doing so, he touched a nerve in the American body politic and forced the issue onto the stage.

That Trump recovery—and the reminder that he has been driving the intraparty debate since he entered the race—illustrate the central reality of the Republican campaign so far, and probably will continue to do so well into the battles to come. It is that this campaign is being conducted against a backdrop of seething voter anger and frustration the like of which we have not seen for a long time. This kind of civic passion, when it emerges, inevitably gets directed against the political class in Washington.

The only candidates on the evening stage who weren’t products of the political class were Trump and Ben Carson. And, while Carson showed a charming sense of humor and a capacity for thoughtful discourse, he didn’t seem constitutionally inclined to exploit his independence from the political elite with anything approaching bombast or fire.

That left Trump as the leading provocateur of the debate, and he played it to the hilt. “Our leaders are stupid,” he declared. “Our politicians are stupid.” This generated both cheers and boos in what seemed to be about equal measure. Clearly, he alienates many voters at the same time that he stirs agreement in others.

It’s interesting that many commentators, following the afternoon debate for the “lesser” candidates whose poll numbers kept them out of the evening show featuring the top ten competitors, identified the biggest winner of that event as former corporate executive Carly Fiorina, who came across as smooth, articulate, sharply focused and concise. Fiorini speaks in vivid language that is fresh and piquant.

But she also offered a small nod of respect to Trump, acknowledging his front-runner status and attributing it to his having “tapped into the anger” of much of the electorate. In other words, she recognized that there’s a reason that Trump, for all of his unattractive traits and actions (and she didn’t shy away from noting his many issue flip-flops over the years), has emerged as the party’s frontrunner at this early stage. It’s all about feelings out there in the electorate.

Much of that sentiment is centered on the tendency of politicians these days to bob and weave on major issues, to parse their answers with hints and nods so as to leaven any harsh reactions, to avoid sharp distinctions out of fear of offending too many people. In any nation’s history there are times—generally, the good times—when such political approaches work just fine. Voters in such times aren’t looking necessarily for stark or harsh or divisive rhetoric. In fact, such rhetoric is viewed in these circumstances as inappropriately provocative.

But we aren’t living in such times today. Voters know the country is in crisis, and it is a crisis wrought by the nation’s political elites. Many want bold, decisive action to get the nation out of the crisis, and they don’t have confidence in those who bob and weave and parse and dance.

Which brings us to Jeb Bush, who after a bit of a halting start emerged as highly articulate, smoothly effective, and engaging. But, when it comes to parsing rhetoric, Bush was the champion for the evening. When asked if he still viewed illegal immigration as an “act of love,” as he once said, he clung to that descriptive phrase. Then he sought to demonstrate that his immigration stance would solve the country’s immigration crisis and to parse the difference between “earned legal status” and amnesty.

He agreed that public-school education should be a state and local matter (departing from his brother) but then declared the country must “make sure that standards are high.” That left unanswered the question of who would be responsible for ensuring such high standards across the nation and how performance would be assessed. Generally, those insisting on high standards and qualitative assessments have gravitated to federal involvement as the only way of ensuring those things. He repeated his previous statements that, had we known in 2003 what we know now, the country should not have invaded Iraq. Then he declared that “ISIS was created because of the void we left” in that country under Obama. This utterly ignores the Middle East chaos unleashed by George W.’s decision to decapitate a brutal but stable regime that posed no immediate threat to the United States. It’s easy for Trump to call George W. Bush’s Iraq invasion “a catastrophe”; it’s impossible for Jeb Bush.

The problem here is that Bush must parse and dance because he is tied to so many policies, programs and people of the past at a time when the political establishment is viewed by many as a sump of failure. He is a smart and deft politician, and he may manage to wend his way through this thicket successfully over the next fourteen months. But it won’t be easy.

The candidate of the evening debate who probably helped himself the most was Florida’s senator Marco Rubio. He demonstrated a marked ability to articulate his views in strong, clear and crisp language, with an unaffected and appealing demeanor. Along with Fiorina, he is likely to see his poll numbers increase as a result of the debate.

Other observations on individual performances:

Wisconsin’s governor Scott Walker: Not likely to get a boost from the debate. He came across as competent and accomplished but lacking in political passion and rhetorical flair. He got off a good line when asked about Russian and Chinese cyberattacks, saying those countries probably know more about Hillary Clinton’s email server than the American people. And he showed some verve in his closing statement.

Kentucky’s senator Rand Paul: Showed a feisty temperament, particularly in a heated exchange with New Jersey governor Chris Christy on the matter of the National Security Agency’s warrantless data collection on Americans’ phone calls. He pronounced himself “a different kind of Republican,” and demonstrated as much with some of his answers, but he didn’t separate himself from his colleagues in any serious way. Direct and concise with many of his pronouncements.

Christy: Particularly bold in demanding action to solve the nation’s entitlement crisis. “The system is broken,” he declared, on a stage in which most of his colleagues have shied away from any vigorous pronouncements on the subject. He showed confidence in his replies and was unabashed on any matters that might stir criticism.

Texas senator Ted Cruz: His effort to be the leading anti-establishment candidate fell a bit flat on a stage with Donald Trump waxing outrageous just a few feet away. But he showed a capacity for defiance. He also delivered one of the most stirring perorations of the night with his closing remarks about his drunken father abandoning his family when he was three, then discovering Christ and returning to his family and pursuing a life of the cloth.

Mike Huckabee of Arkansas: At times engaging, occasionally funny, often eloquent, he fulfilled his image as particularly firm on social issues, notably abortion. He showed a populist streak by talking about “the Wall Street to Washington” axis of power, and pushed his idea that much of America’s economic woes, including the entitlement crisis, could be addressed with a consumption tax. Even prostitutes and drug dealers would have to pay such a tax, he argued.

Ohio governor John Kasich: He tended to speak in platitudes but took every opportunity to tout his record as longtime congressman and Ohio’s chief executive. He came across as a bit of a policy wonk and strongly defended his decision to expand Medicaid in his state.

Finally, a look at the party as reflected in the debate. First and foremost, this is a party of the starkest neoconservative sensibilities. The sectarian furies unleashed in the Middle East by George W. Bush’s Iraq invasion didn’t seem to exercise even a slight inhibiting impact upon the thinking of these politicians. Rand Paul departed from the orthodoxy upon occasion, but mostly around the edges and without any apparent inclination to challenge the orthodoxy in any frontal way. It is a party strongly committed to reversing the accumulation of federal fostered by Obama. It is firmly committed to reducing the size and scope of the government in Washington.