The Battle for Trump's Taxes is Just Beginning 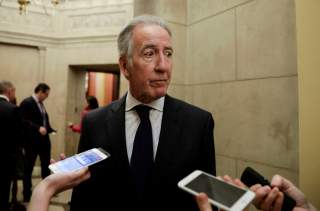 As Tax Day approaches, most Americans are busy trying to keep their money from the IRS. Meanwhile, President Donald Trump is busy trying to keep his tax returns from Congress. In what is probably a much tougher tug-of-rope than House Ways and Means Committee Chair Richard Neal (D-MA) initially expected, the Trump administration is pulling out all the stops to prevent the House’s request for the president’s personal and business tax returns.

Chairman Neal’s Wednesday deadline for the tax returns came and went due to the personal intervention of Treasury Secretary Steven Mnuchin, fresh from his viral confrontation with House Financial Services Chair Maxine Waters (D-CA). “The Committee’s request raises serious issues concerning the constitutional scope of Congressional investigative authority, the legitimacy of the asserted legislative purpose, and the constitutional rights of American citizens. The legal implications of this request could affect protections for all Americans against politically-motivated disclosures of personal tax information, regardless of which party is in power…For the same reasons, I intend to supervise the Department’s review of the Committee’s request to ensure that taxpayer protections and applicable laws are scrupulously observed, consistent with my statutory responsibilities,” wrote Secretary Mnuchin to Chairman Neal.

Chairman Neal has invoked Section 6103 of the Internal Revenue Code, which reads in part, “Upon written request from the chairman of the Committee on Ways and Means of the House of Representatives…the [Treasury] Secretary shall furnish such committee with any return or return information specified in such request, except that any return or return information which can be associated with, or otherwise identify, directly or indirectly, a particular taxpayer shall be furnished to such committee only when sitting in closed executive session unless such taxpayer otherwise consents in writing to such disclosure.”

While legal opinion is near unanimous that Secretary Mnuchin “shall furnish” the requested documents (Trump’s tax returns), there’s no specificity on when or how quickly he must fulfill the request. His delaying tactics may violate the spirit of the law, but not the technical letter. If Mnuchin continues to stonewall, it’s conceivable he could hold up the process until the election of a new Congress next year. In that case, either a Republican House would not make the request, or a reelected Democratic House would have to refile and start over. And if President Trump is not reelected, the issue would be a dead letter.

What Chairman Neal could do would be to subpoena Trump’s tax returns. If the Treasury still refused to furnish the documents in a timely manner, the judiciary would get involved. A judge would order Mnuchin to comply with the subpoena and he would be legally required to do so. If the judgment was appealed, the conflict could go all the way to the Supreme Court for a final decision.

A second option would be to circumvent the federal system altogether. On Monday, a bill was introduced in the New York state senate that would authorize the New York State Commissioner of Taxation and Finance to release tax returns to Congress upon request. New York has been Trump’s lifelong residence and the home of the Trump Organization. While only a partial view, Trump’s state returns might be enough to wet the Democrats’ whistle.

This potentially momentous legal battle would suck up a lot of air in the current political landscape. It echoes the previously raised question of whether going into the 2020 election the Democratic Party would prefer to heighten focus on the Trump administration’s conduct and the president’s personal actions, or policy divergences. While a majority of Americans favor the release of President Trump’s tax returns, do voters place priority on it over healthcare and jobs numbers?