The Battle for Ukraine's Presidency is Just Beginning 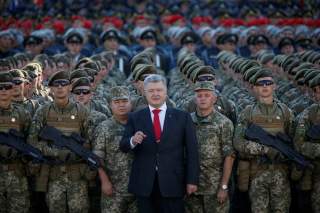 Elections are looming in the Ukraine, a telling time for a country in the midst of an ongoing bloody conflict and a stark East-West divide. In a race with over forty officially registered candidates, the country is far from unified when it comes to backing a new leader, but three individuals have managed to stand out as likely contenders. Petro Poroshenko, Yulia Tymoshenko, and Volodymyr Zelenskiy have positioned themselves as the top choices, but it will be a long, contentious race to the polls with both Ukrainian and Russian interests dangling in the balance. Allegations of vote buying, corruption, and Russian interference have spread, promising to heavily influence decisions made at the polls on March 31 and April 21. Standing at a crossroads of Russian influence and Western ideals, a new administration could see shifts in either direction and mark a new course for Ukrainians.

Perhaps one of the more surprising front-runners in this race is newcomer Volodymyr Zelenskiy, an actor and comedian well known for his political commentary and television shows centered on demonstrating Ukraine’s broken government system. His political party, Servant of the People, has the same name as his hit television show focused on a political outsider winning the presidency. A few months ago, few would have expected him to make it to the second round of voting. He now has positioned himself as the leader in most polls with a reported five- to ten-point lead over Yulia Tymoshenko and Petro Poroshenko. For a nation embroiled in corruption scandals with a deeply distrusting populace, a political outsider may be a welcome breath of fresh air. Zelenskiy is not without controversy, however, and many see him as the puppet of powerful oligarch Ihor Kolomoisky with whom he shares close ties. Katharine Quinn-Judge, a Ukraine senior analyst with the International Crisis Group, claims that most Ukrainians “don’t see this as a major threat” since “when you look at the other alternative, it’s hard to see how it could be so much worse.” A native of southeastern Ukraine and a Russian-speaker himself, Zelenskiy is one candidate who alluded to holding diplomatic talks with Russia to find an end to the war in Eastern Ukraine, a view in contrast with that of Poroshenko, who ascertains that the war has allowed Ukraine to build a new identity for itself.

The leader of the All-Ukrainian Union “Fatherland” party, Yulia Tymoshenko currently holds about 12 percent of the vote going into the first round, ranking just ahead of incumbent Petro Poroshenko. Despite her political insider status and seeming aversion to reform, Yulia Tymoshenko has managed to position herself as a proponent of substantial change in the country. A populist, Tymoshenko plays to her rural base by focusing on issues like high gas prices and plans to boost the economy while promising to repeal Poroshenko policies including recent healthcare reform. She has continuously built bridges with the American diplomatic community and positioned herself as a pro-Western candidate through involvement in anti-fraud activism during and after the Orange Revolution. However, some Western leaders worry that her undoing of recent reforms and rocky relationship with the International Monetary Fund may destabilize the nation further, creating a vacuum for Russia to exert influence.

Poroshenko (Better the Devil We Know?)

To an American audience, an incumbent candidate should have a decided upper hand in an election. But among Ukrainians, who have only re-elected one president since 1991, Ukrainian leader Petro Poroshenko has the highest disapproval rating of any candidate. Crippling gas price increases and policies that have alienated the country’s east have proven detrimental to his campaign while scandals involving his close associates continue to emerge. Despite his controversies, however, some Western allies are hoping for a Poroshenko win as his policies most actively seek to assimilate Ukraine into Western ideals. Since the start of his first term, he has put policies in place to promote the use of Ukrainian language, bolster the creation of an independent Ukrainian Orthodox Church, and rally support in the West for large-scale sanctions for Russia. These policies have attracted negative attention from the Kremlin and culminated in active efforts from Russia to prevent his taking a second term.