Be Afraid, Europe: Russia and America's Dangerous Clash Heats Up 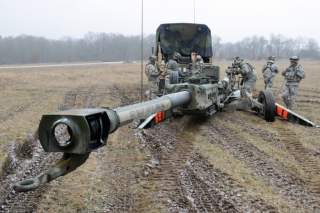 History in its perversity often—actually, almost always—locks key actors inside the events they are struggling to master and obscures from them the larger implications of their actions. It happened on the road to World War I, during the 1930s, and in the descent from World War II’s Grand Alliance to the original Cold War. And it appears to be happening today.

In Russia and the West, leaders understandably have their minds fixed on the fiercest and most immediate problem. For the United States and its European partners, it is the war in southeastern Ukraine and Russia’s complicity in it. For Russia, it is the outcome of that war and the chance that it will be decided by the United States and its allies. Preoccupation dictates definition. For the United States, now joined by the Europeans, the task is to tighten the economic hammerlock on Russia, until it can take it no more and ceases to fuel the war. The other larger dimension of the challenge—helping Ukraine refurbish a corrupt and dysfunctional political system, dig itself out of a cavernous economic hole, and reacquire legitimacy among a majority of its people in the eastern half of the country—while scarcely ignored, takes a backseat.

For Russia, the shakier task is to keep the pressure on Kyiv by preventing the insurgency in the east from being smashed, while mitigating the isolation and punishment the West means to impose on it. How all of this is to be managed in a fashion that produces a Ukraine with which Russia can live goes unanswered.

Russians will have to decide, as events unfold, whether this is a smart way to frame the problem. In the West, the way that it is framed is understandable but historically shortsighted. Understandable, because while Russia’s support for an insurgency against a government whose orientation and policies it opposes is hardly unique in international affairs, the context is. It comes on the heels of the Crimean landgrab, an egregious violation of not merely recent, but post–World War II international norms, and it restores an East-West confrontation to a Europe thought to be at last free of it. Finding some way to turn Moscow from a source of the problem into part of the solution cannot but be a key objective of U.S. and European policy.

Doing this the wrong way, however—and worse, with eyes closed to still larger stakes—carries serious dangers and potentially large costs. The dangers are imminent. If, as an astute Russian analyst, Dmitri Trenin, insists, the Russian leadership now “sees the U.S. goal as being not so much stopping the Russian support for the Donbas rebels, or even getting Moscow to withdraw from Crimea, but as the toppling of the Putin regime by means of economic pain and popular discontent wrought by the sanctions,” ahead lies an escalatory spiral, not a slow deflation of the crisis. Russia is likely to up the ante, or at least, hold its ground, not retreat. The United States and Europe, ready as they may be to tighten the hammerlock further, will then need to decide whether dissuading Russia isn’t enough. Whether defeating it is not necessary, and to do that, Ukraine’s military must be aided in major ways, not only with more potent volumes and kinds of equipment, but directly, say, by providing real-time targeting information to Ukrainian artillery and aircraft.

The dangers, therefore, should be obvious. The potential costs of the current U.S.-led Western approach, however, require a larger perspective. Daily, they mount up as the reports come in of severed ties between U.S. and Russian nuclear scientists working on a wide array of projects, from the peaceful use of nuclear energy to planetary defense against asteroids, imperiled efforts to eliminate weapons-grade nuclear materials spread around the world and suspended NATO-Russian cooperation in constructing innovative technologies for fighting terrorism. Beyond a still longer list of ruptured collaborations on vitally important problems, there is the issue of what it will mean when Moscow and Washington approach controlling nuclear weapons and their proliferation, climate change, catastrophic terrorism and developing and protecting the Arctic as enemies, rather than sometimes partners—unless one is naïve enough to think that, were Russia to walk away from the war in Ukraine tomorrow, the deeply corroded assumptions that we now make about one another will simply evaporate.

Stepping back farther, what is likely to be the more distant effect of the West’s weaponizing of economic relations on not only Russia’s, but China’s and others’ long-term international economic strategies? How much may they be willing to invest in the insurance provided by an alternative set of international economic institutions—the first glimmer of which may have been at the Brazilian BRICS summit last month? Or how far will U.S. advantage slip, as a deepening U.S.-Russia Cold War increases China’s field of maneuver and gives it the upper hand in this three-way relationship?

None of this argues against taking strong measures to influence Russia’s part in the Ukraine crisis; but it does recommend acting simultaneously on two levels: on one level, to more effectively integrate efforts to end the Ukraine war with efforts to overcome the larger Ukrainian political and economic crisis, in particular, by struggling to shrink the legitimacy chasm between Kyiv and the eastern provinces. On the other, the United States needs to back away from its strenuous efforts to isolate Russia and reengage its leadership, matching sticks with a clear assessment of what it will mean if over this next decade, the two countries act as adversaries, while offering a compelling vision of an alternative future, together with concrete steps that the United States is willing to take to make it happen. Then let Putin’s Russia choose.