Be Careful What You Wish For: A 'Persian Spring' Would Be a Disaster 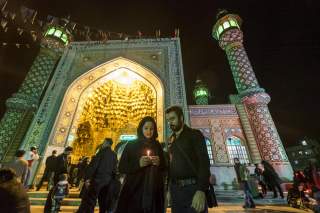 After a week of violent demonstrations in several large cities and small towns, Maj. Gen. Mohammad Ali Jafari, commander-in-chief of the Islamic Revolution Guards Corps (IRGC), announced that the “sedition” has been defeated. It will take some time to accurately understand the roots of this violence and how it will impact Tehran’s domestic and foreign policies.

Still, the excitement expressed by some officials, media outlets, and think tanks in the United States, Israel, and some Persian Gulf states raise two important and interrelated questions: Is a regime change in Tehran desirable? And what is the “right” approach to deal with Iran?

A close examination of Iranian policy suggests that the government has a long way to go to meet the aspirations of the socioeconomic and political needs of its large and young population. These include unemployment, gender equality, transparency, corruption and pollution, among others. The “right” way to address these challenges is a gradual reform of the system, not regime change. The experiments with regime change in the broad Middle East are not encouraging. Egypt, Iraq, Libya, Syria and Yemen are cases-in-point. The process of regime change by definition is destabilizing. An unstable Iran would threaten key global interests:

- Rhetoric aside, the Islamic Republic, particularly the Quds force and its leader Maj. Gen. Qasem Soleimani, has been playing a major role in the global war on terrorism. The Sunni extremist groups including Al Qaeda and ISIS perceive Shias as one of their main enemies. In June 2017 ISIS claimed responsibility for two major terrorist attacks in Tehran one on the parliament building and the other on the tomb of Ayatollah Khomeini, the founder of the Islamic Republic. Twelve people were killed and forty-six were wounded in these attacks. ISIS would welcome a regime change in Tehran.

- Iran’s involvement in regional conflicts in Syria, Iraq and Lebanon is driven by national security concerns, not ideological orientation. Regional powers do intervene in their neighbors’ affairs to protect perceived national interests. Egypt’s intervention in Libya, Saudi Arabia’s in Yemen, Turkey’s in Syria, and Israel’s in Syria and Lebanon are good illustrations. Iran, under any regime, is not different from these other regional powers.

- An unstable Iran is certain to raise significant challenges to the approximately three million Afghan refugees residing in Iran. It would deal a heavy blow to the global efforts to restrain drug trafficking from Afghanistan to Europe and the rest of the world. Finally, Iran holds the world’s largest combined oil and natural gas proven reserves. Instability in Iran is certain to add significant uncertainties to the global energy markets and the broad global economy.

In short, encouraging regime change and instability in a major regional power with a strategic location and leverage in the Middle East and South Asia is a risky venture. The demonstrations that started in late December have ended and the authorities have been able to restore order. Top Iranian officials, including Ayatollah Khamenei and President Rouhani, have acknowledged the need to address the socioeconomic and political roots of this wave of protests. Like any country, Iran’s domestic and foreign policies will continue to reflect the perceptions and interests of different factions within the political establishment. Like it or not, the Islamic Republic is here to stay. Almost four decades after the 1979 Islamic Revolution, the Iranian economy is growing at a higher rate than most neighboring countries and the country has a more functional and predictable government than most of its neighbors. Calling for a regime change is the wrong strategy. A better approach would be for the United States to work with its European and Asian allies to help the Iranian government to address the major socioeconomic and political aspirations of the Iranian people. Adhering to the nuclear deal, supporting foreign investment, activating cultural engagement, and promoting strategic dialogue are likely to serve the interests of all concerned parties. A stable Islamic Republic is good for the Iranian people, regional powers and the international community.

Gawdat Bahgat is a professor at the Near East South Asia Center for Strategic Studies at National Defense University. The opinions expressed in this piece are the author’s alone and do not represent the views of the U.S. government or the policies of the Department of Defense.

Image: A woman standing next to her husband holds a candle during a religious ceremony to mark Ashura at a shrine in the north of Tehran October 24, 2015. Ashura, which falls on the 10th day of the Islamic month of Muharram, commemorates the death of Imam Hussein, grandson of Prophet Mohammad, who was killed in the 7th century battle of Kerbala. REUTERS/Raheb Homavandi/TIMA