Bearing Witness To Crisis In Yemen 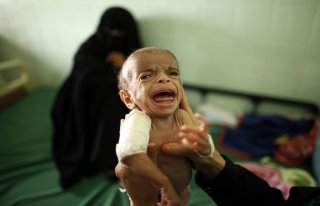 Skye Fitzgerald is no stranger to human suffering. In some ways, he seeks it out: as a documentary filmmaker, his work has taken him to some of the world’s worst conflict zones, where his films bear witness to humanitarian crises as they unfold.

His latest, Hunger Ward, follows two women healthcare workers in war-torn Yemen, Dr. Aida Alsadeeq and Nurse Mekkia Mahdi, as they fight to thwart the spread of starvation among infants and children.

“It is hard to watch a child die in front of you. It generates anger—for me, it is a catalyst for action,” Fitzgerald said in an interview about the making of the film on the latest episode of Press the Button. The third in Fitzgerald’s refugee trilogy series, Hunger Ward, has been nominated for a 2021 Academy Award in the category of Documentary (Short Subject).

Food insecurity—already a major issue in Yemen prior to when the current crisis started in 2014—has reached catastrophic levels, worsened by a Saudi-led blockade on fuel and other essential goods and an indiscriminate bombing campaign that is believed to have targeted medical facilities, farmland, and transport infrastructure.

“It is easy to look at war, conflict, or suffering and see just that—just the horror of it,” said Fitzgerald, in the interview conducted by guest host Farshad Farahat. “But you can look at the same scene, the same geopolitical conflict, and you can see hope. You can see beautiful acts of resistance. You can see normal people doing extraordinary things under extraordinary circumstances.”

Indeed, Hunger Ward’s protagonists are two such examples of extraordinary hope. “And that is my intent,” Fitzgerald continued on his philosophy for exploring difficult subject matter. “To shine a light on these incredible acts of generosity and of spirit that Dr. Alsadeeq and Nurse Mahdi are doing on a daily basis. I see nothing more important than the act to save a child.”

The crisis in Yemen, now in its sixth year, can at times be difficult to comprehend. Its geopolitical drivers—a tangle of regional power struggles, international financial interests, and deeply rooted sectarian tension—are complex and often misreported. A continued assault on freedom of the press and a near-embargo on foreign journalists entering the country has effectively created a media blackout that poses a severe challenge to raising awareness about the seemingly endless conflict.

But what is particularly confounding is the U.S. government’s continued complicity in what can only be characterized as an entirely preventable humanitarian catastrophe. “There is an air and sea blockade over the country that is directly contributing to the famine, which is increasing on a daily basis and our government continues to support it,” Fitzgerald said.

Though measures recently announced by the Biden administration indicate an interest in scaling back direct U.S. support for the Saudi-led offensive, they fall short of addressing the indirect causes of a crisis the World Food Programme recently warned was at risk of becoming “the biggest famine in modern history.” Progressive leaders in Congress have called on the Biden administration to take a more involved role in addressing the worsening crisis and make permanent its temporary freeze on U.S.-Saudi arms sales, but it remains unclear how much diplomatic pressure the administration is willing to exert in the region.

For Fitzgerald, there is a beacon of hope. “I’m hopeful that there are politicians out there that are starting to break the stranglehold. But it won’t happen overnight,” he says, “we need to get the word out. Once people learn how complicit our government is in the starvation of children—that is going to be an engine of transformation for civil society to engage more fully, to change the current status quo.”

The entire interview with director Skye Fitzgerald is available here on Press the Button. To watch the trailer for Hunger Ward and browse streaming options visit www.hungerward.org/see-the-film