Before Deciding Who Rules Jerusalem, Decide What Jerusalem Is 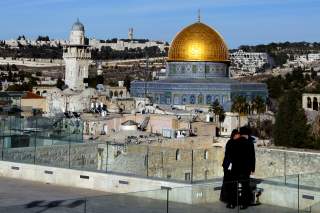 Even though I do not practice religion, upon stepping foot in Jerusalem for the first time, I knew it was an exceptional place. The weaving streets and alleys of the Old City lead one through colorful shops owned by Armenian, Jewish, and Palestinian Christian and Muslim residents. The walled city contains the magnificent and sparkling Dome of the Rock, the deeply moving Western Wall and Church of the Holy Sepulchre, and the elegant al-Aqsa mosque. Quite simply, there is no place like Jerusalem on earth.

There are several ways to conceptualize Jerusalem’s centrality to the Israeli-Palestinian conflict. One is in the religious and historic terms that make the city a subject of such emotive power. Many have warned President Donald Trump against announcing U.S. recognition of Jerusalem as Israel’s capital due to concerns that it will fuel anger about control of the city’s most sacred religious sites. However, a premature U.S. position on Jerusalem would also lay bare a basic ambiguity about the city that underlies the conflict—namely, the question of what Jerusalem actually is, and who are, actually, Jerusalemites.

It is not despite, but because of, Jerusalem’s significance for communities of faith around the world, that the American position must be grounded in the reality of the city today, rather than provocative, attention-grabbing statements. And the reality of Jerusalem is that it is not a fixed concept, but has been rhetorically and tangibly resized to suit Israel’s strategic, symbolic and political objectives. The seeming capriciousness of Israel’s decisions about who and what constitutes Jerusalem, from 1967 to the present, has provoked anxiety among Palestinian residents of the city and its environs. If President Trump announces America’s recognition of Jerusalem as the capital of Israel, this gives Israel a blank check to redraw and reshape the city as it pleases, which likely means continued isolation and stagnation for the city’s Palestinian residents.

Where does Jerusalem begin and end? The answer to this question is not simple. From 1949 until 1967, the Green Line defined the division between Israeli-controlled West Jerusalem and Jordanian-controlled East Jerusalem, with all of the city’s major holy sites on the eastern side. In the 1967 war, Israel won control of the eastern half of the city, and quickly established new municipal boundaries that absorbed the new territory. The boundaries were drawn to include the historic old city and its holy sites, but to exclude a number of Palestinian population centers, such as most of Abu Dis, ar-Ram, while arbitrarily including other villages that were previously excluded from the city limits.

1967 represented a dramatic shift for Palestinian civilians, some of whom soon found themselves with mysterious new identity cards, identifying them as residents of the city, whereas many others were given documents identifying them as residing in the West Bank. Those that were living on the Jerusalem side of the municipal boundary were given access to certain benefits, such as the ability to live and work in Israel and access to social welfare. However, these cards are revoked if residents travel away from the city for too long, and Jerusalem residents are not allowed to vote in national elections. While Jerusalem residents can apply for Israeli citizenship, they rarely do, and a small percentage of those who apply actually received it.

West Bank residents, on the other hand, lived under unmediated military occupation—until the creation of the Palestinian Authority in 1994—and could not enter Jerusalem or Israel without special permission. Many of those who were not present for the first 1967 census in the West Bank and Gaza never received any identification, and thus lost their ability to return home.

Further changes for Arab-Palestinians in and around Jerusalem came in the mid-1990s when, in response to security threats, Israel began introducing checkpoints and closures to further restrict access to Jerusalem by Palestinians living in the West Bank and Gaza. This drove an even larger wedge between individuals and members of their family and social networks, their places of employment, and their access to key city services such as healthcare.

The next dramatic transformation came with the outbreak of the Second Intifada, when construction of the separation barrier between Israel and the West Bank begun. The wall constituted a second de facto “border” for the city, with some communities that were within official municipal city limits nonetheless finding themselves suddenly on the other side of a 25-foot tall concrete structure, cut off from family, friends, and city services. Most of the residents of these communities hold Jerusalem identity cards, entitling them to city services, but the reality is that these areas are almost completely abandoned by the city government, with social services on the verge of collapse. Contentious debate also ensued about which Jewish settlements outside the Green Line could, or should, be incorporated onto the Israeli side of the wall. More recently, right-wing Israeli lawmakers have proposed annexing several large Israeli settlements outside the Green Line to the city; a bill which was temporarily tabled, but could be reinvigorated if Israeli sovereignty in Jerusalem is fully recognized. This would constitute yet another sudden shift in who and what constitutes Jerusalem.

Compounding these anxieties is the fact that Jerusalem’s Arab population—which comprises about 37 percent of the city population—experiences lower educational attainment and higher poverty than the city’s Jewish residents. Over 50 percent of Arab-Palestinian residents of prime working age—or over 63,000 individuals between twenty-five and sixty-four years old—are either out of the labor force or unemployed. In multiple ways, Arab-Palestinian residents of the city hear from the city and national government that they are not welcome. Several sources reported a worrying surge in home demolitions in East Jerusalem last year.

The only path forward for Jerusalem is a negotiated solution that protects the rights and opportunities of all those living in the region to worship, to build, to move, to go to school, to take part in the city’s heritage, and to participate politically and economically. Recognition of Jerusalem as the capital of Israel throws the fate of Jerusalem’s Arab-Palestinian residents into uncertainty. While many have been through such bouts of uncertainty before, it is not a recipe for building the trust that is needed to quell violence and build peace, in Jerusalem or in the region as a whole.

Diana B. Greenwald is a Postdoctoral Research Fellow with the Middle East Initiative at Harvard Kennedy School’s Belfer Center for Science and International Affairs.