Beijing Needs the South China Sea to Stay on Top 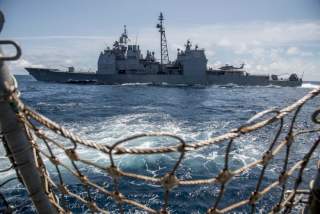 The increasingly aggressive and militaristic behavior in the South China Sea by China is driven by the economic needs of the Chinese Communist Party (CCP), which currently controls mainland China’s government. While the world has looked in wonder at the economic revival of China since its economic reforms, enacted in the late 1970s, it has overlooked a serious flaw by the CCP in its failure to establish an independent judiciary that would adjudicate contract disputes.

A paper written in September of 1996 by a team of economists led by Dr. David Rose at the University of Missouri at Saint Louis entitled “China’s Development Dilemma: Property Rights and Growth” revealed the serious—perhaps fatal—flaw of the CCP in opening up economic growth by encouraging investment in private industry without also reforming property rights and providing for impartial contract adjudication. That the CCP did not provide for such reform was not done in error. Any type of impartial adjudication of contract dispute would, in the CCP’s eyes, threaten its hold on power. Because of this, the economic reforms of the late 1970s did not include any reform of the judiciary.

In their paper, Dr. Rose and his team argue that the phenomenal rate of economic growth enjoyed by the CCP economy would slow and then return to stagnant economic growth, as the economic growth then being enjoyed by the CCP economy in the 1990s was the result not of “steady-state growth” but rather by the removal of the constraints imposed by an economy that was centralized and unresponsive to the demands and needs of a dynamic culture. In the words of the economists from UMSL, the Chinese economy benefited from “catch-up growth” once these constraints were removed—though when “catch-up growth” has run its course, it cannot, by its very nature, be repeated.

Since the population of China has accepted the rule of the CCP as a necessity for increased economic growth, and the CCP has repeatedly pointed to the economic expansion as the reason why it should remain in power, the slowing of the Chinese economy poses a very real and deadly threat to the continued acceptance by the Chinese people of the CCP’s right to govern the nation.

The party will never willingly give up its monopoly on political power in China, and in order to retain power it must of necessity resort to economic conquest. The CCP adopted the nine-dash line when it took power in 1949, and claims the entire South China Sea as its own. It bases its claim on ancient history, and refuses to acknowledge the United Nations Convention on the Law of the Sea (UNCLOS), even though China is a signatory to the treaty, and a permanent member of the UN Security Council. The reasons for the CCP’s determination to establish the South China Sea is quite understandable when one realizes the wealth waiting to be exploited there.

The Wealth of the South China Sea

In 1968, oil was discovered in the region. The Geology and Mineral Resources Ministry of the People’s Republic of China has estimated that the Spratly area holds oil and natural gas reserves of 17.7 billion tons, compared to the thirteen billion tons held by Kuwait, potentially placing it as the fourth-largest reserve bed in the world. The United States Energy Information Administration contests this, estimating that almost no oil and less than one hundred billion cubic feet of natural gas exists in fields near the Spratly Islands. Still, these large potential reserves have assisted in intensifying the territorial claims of the neighboring countries.

In 1968 and 1970, the Philippines started to take its territorial claims more seriously and stationed troops on three islands which had been claimed by the adventurer Tomás Cloma as part of his micronation of Freedomland. In 1973, Vietnamese troops were stationed on five islands.

On March 11, 1976, the first major Philippine oil discovery occurred off the coast of Palawan, near the Spratly Islands territory. In 2010, these oil fields supplied 15 percent of all petroleum consumed in the Philippines. In 1992, the PRC and Vietnam granted oil exploration contracts to U.S. oil companies that covered overlapping areas in the Spratlys. In May 1992, the China National Offshore Oil Corporation (CNOOC) and Crestone Energy (a U.S. company based in Denver, Colorado) signed a cooperation contract for the joint exploration of the Wan’an Bei-21 block, a 25,155-square-kilometer (9,710-square-mile) section of the southwestern South China Sea that includes Spratly Island areas. Part of the Crestone contract covered Vietnam’s blocks 133 and 134, where PetroVietnam, PetroStar Energy (USA) and ConocoPhillips Vietnam Exploration and Production, a unit of ConocoPhillips, agreed to evaluate prospects in April 1992. This led to a confrontation between China and Vietnam, with each demanding that the other cancel its contract.

The region is one of the world's most productive areas for commercial fishing. In 1988, for example, the South China Sea accounted for 8 percent of the total world catch, a figure that rose to 35 percent in 2010. The PRC has predicted that the South China Sea holds combined fishing and oil and gas resources worth $1 trillion. There have already been numerous clashes between the PRC and the Philippines, the PRC and Vietnam, and between other nations over “foreign” fishing vessels in Exclusive Economic Zones, and the media regularly report the arrest of Chinese fishermen. In 1984, Brunei established an exclusive fishing zone encompassing Louisa Reef in the southeastern Spratly Islands.

The Production Function and Non-Steady-State Growth

The production function comprises land, capital and labor. These three functions are used to calculate the productivity of a good or service.

Since steady state growth originates in the capital function (an input in technology increases productivity and decreases costs at the same time), and the theory of marginal utility prohibits to a great extent analog capital inputs into the production function. In simpler terms, when the marginal utility rate is zero, no further inputs will affect production. Capital is being wasted when the rate of return is zero or negative.

The one thing China has plenty of is labor, and no additional inputs can be used to increase wealth or enhance marginal utility, because of the high supply of labor.

The remaining subfunction, land, is the only subfunction that can be used to increase inputs into the production function, and in this case, assure the CCP of a secure hold on economic, political and military power. To acquire land, the CCP need to take it, or in their words, reclaim disputed territories.

The impetus towards war in the South China Sea is not fed by nationalism or by claims of past ownership, but is driven by simple economics—nothing more, and nothing less.

Richard Caroll is retired from the U.S. Army Reserve with the rank of Sergeant First Class. His specialties were administration and intelligence. He is also retired from the Bureau of Labor Statistics, where he worked as an economist.