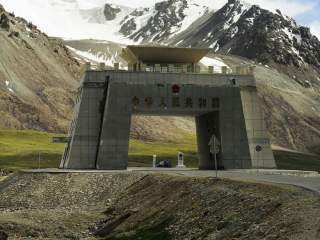 The One Belt, One Road (OBOR) initiative—a series of land and sea-based trade routes intended to link China more closely with the regions located to its west and south—was at the top of Beijing’s regional diplomatic agenda in 2015 and is likely to occupy just as important a position in 2016.

The Silk Road Economic Belt, OBOR’s land-based component, encompasses several economic corridors around China’s western rim, making it appear more like a grid instead of a single linear path. First unveiled by Xi Jinping during his September 2013 trip to Kazakhstan, the “belt” project envisions the construction of new rail lines, highways, pipelines for oil and gas, telecommunications infrastructure and fiber optic cables. Whereas two corridors will extend across the Eurasian landmass at different latitudes and terminate in Europe, another will connect China’s southwestern provinces with mainland Southeast Asia. The proposed China-Pakistan and Bangladesh-China-India-Myanmar economic corridors will be closely integrated with the belt project and provide important port access to the Indian Ocean.

The seafaring “Twenty-First-Century Maritime Silk Road” begins in the major port cities of southern China and passes through the South China Sea before extending across the Indian Ocean to East Africa and northward through the recently expanded Suez Canal to Europe. Infrastructure investment along this maritime “road” will primarily involve the construction of new ports and upgrades to existing port facilities. Beijing in particular seeks to facilitate greater Chinese commercial (and perhaps naval) activity in the Indian Ocean region.

According to an important vision document released by the Chinese government in March 2015, OBOR is intended to facilitate regional trade and investment, promote more widespread use of the renminbi in cross-border trade and foster greater exchanges between Chinese citizens and the peoples of OBOR countries. China in late 2014 also established a $40 billion Silk Road Fund to help finance OBOR-related projects. The financing vehicle signed its first deal in April 2015 by committing $1.65 billion for a hydropower dam near Rawalpindi in the China-Pakistan Economic Corridor. The Asian Infrastructure Investment Bank, which will begin formal operations this month with a capitalization of $100 billion, is also expected to finance some OBOR projects.

While Beijing has couched its OBOR initiative in altruistic terms, it is chiefly designed to benefit China’s economy. Most importantly, the Chinese government seeks to spur economic development in its poorer inner regions, which lag far behind the prosperous coastal provinces. In Xinjiang in particular, Beijing believes enhanced economic development will blunt the appeal of Uighur extremism. Large Chinese state-owned enterprises in the infrastructure, energy and advanced manufacturing industries are also being encouraged to “go out” and win contracts along the routes. This could throw a lifeline to those large sectors, which have suffered in recent years from a glut of domestic overinvestment and the broader slowdown in the Chinese economy.

Geostrategic motivations also drive Beijing’s OBOR initiative, foremost among them the desire to circumvent U.S. encirclement in the western Pacific. U.S. influence in the regions west of China is considerably less strong than around China’s eastern rim, giving Beijing further incentive to “go West” as Washington pivots to the Asia-Pacific. Additional pipelines linking China with hydrocarbon-rich Central Asian states, and the transport of Middle Eastern oil through Pakistan instead of the South China Sea, will also help provide greater energy security. Currently, more than 70 percent of China’s oil imports pass through the Strait of Malacca—a chokepoint between the Malay Peninsula and the Indonesian island of Sumatra where Chinese strategists fear a possible U.S. Navy blockade. A further geostrategic motivation is focused on soft power: China hopes to win the goodwill of OBOR nations by providing billions of dollars in financing for infrastructure projects that will likely benefit their economies.

As China advances its vision for the regional economy in the form of OBOR, it faces the key challenge of reassuring its Asian neighbors and the United States that its intentions are genuinely benign. Some observers have equated OBOR with the Cold War–era Marshall Plan, but Chinese Foreign Minister Wang Yi and other senior Chinese officials have vigorously claimed that the initiative is about “win-win” economic cooperation rather than geopolitics. China’s pivot westwards could alarm India and Russia, two major powers which claim spheres of influence in South Asia and Central Asia, respectively. Less powerful nations along the routes may also be hesitant to fully participate in the initiative for fear of dominance by Beijing.

OBOR will continue to take fuller shape in China’s national investment and regional diplomatic strategy throughout 2016 and beyond. The initiative is expected to feature prominently in China’s Thirteenth Five-Year Plan (to be unveiled during the spring 2016 meeting of the National People’s Congress) that will guide the economy between 2016 and 2020. China will also likely intensify discussions with partnering countries about potential investment projects.

Kyle Churchman is a resident junior fellow at the Center for the National Interest. An earlier version of this article appeared on the Web site of the National Bureau of Asian Research.