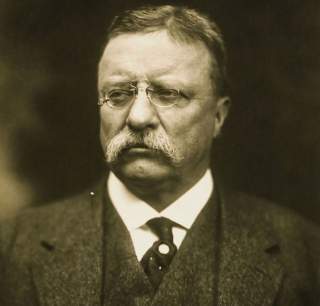 Roosevelt had an upheaval of his own to manage. In 1904, it appeared European navies were poised to seize the customhouse in the Dominican Republic. In those days, the great powers often occupied customs facilities when weak Caribbean governments defaulted on their debts to European banks. European agents would confiscate the tariff revenue and use it to repay the government’s overseas creditors.

TR made no objection to debt repayment. He feared, however, that once Europeans took possession of custom houses—and thus of coastal territory in the Americas—they would convert these sites into naval bases astride sea routes crisscrossing the Caribbean and Gulf. Shipping bound to and from the Isthmus would come under constant threat.

Such mischief-making was intolerable for Americans and far from uncommon in that colonial epoch, when—to name just one example—Berlin could demand control of the Chinese seaport of Qingdao as recompense for the murder of two missionaries. To discourage antics of that sort, Roosevelt affixed a “Corollary” to the Monroe Doctrine declaring that the United States would intervene to arrange debt repayment when Latin American governments proved unable or unwilling to fulfill their obligations.

Call it preemptive intervention. By apportioning the proceeds from import or export duties between the local government and European creditors, that is, Washington would deny Europeans any excuse to seize territory in the Caribbean or Gulf. It would fend off encroachment that flouted the Monroe Doctrine, while imperiling vital seaborne interests. And at the same time, Roosevelt used the Dominican controversy to retract Olney’s fiat-is-law proclamation—and substitute something less grandiose, better-defined and more palatable for Latin Americans.

And Xi? Of late, it’s become fashionable among Chinese pundits to urge Washington to cease opposing Beijing’s maritime territorial claims. After all, they say, China is only doing what the United States did under the aegis of the Monroe Doctrine. Here’s where the Xi-Roosevelt comparison clarifies matters. By asserting “indisputable sovereignty” over the South China Sea, is Xi asserting a Roosevelt Corollary with Chinese characteristics?

Nope. No U.S. administration ever construed the Monroe Doctrine as conferring sovereignty—ownership backed by force—of the Western Hemisphere, or even of the Caribbean Sea basin. To the extent that Xi’s claims resemble those of a U.S. president, the analogue would be Grover Cleveland, not Theodore Roosevelt. After all, Beijing in effect proclaims that its fiat is law in the South China Sea. And its fiat holds that 80-90 percent of the sea and its islands belongs to China, to dispose of as it pleases.

It’s worth recalling, furthermore, that TR dispatched Secretary of State Elihu Root on a goodwill tour of Latin America in 1906 for the express purpose of disavowing Cleveland’s and Olney’s version of the Monroe Doctrine. This message resonated with Latin American audiences by most accounts. Heck, Brazil dubbed the edifice built in Rio de Janeiro for that year’s Third Pan-American Conference Palácio Monroe. One doubts that, say, the Philippines will erect a Palácio Xi in Manila any time soon.

But even the Roosevelt Corollary lent itself to abuse. During the presidencies of William Howard Taft and Woodrow Wilson, it furnished a convenient pretext for U.S. intervention around the Caribbean basin and in Mexico. Indeed, Washington retracted the Corollary in the 1920s in hopes of assuaging Latin Americans’ resentment of the northern colossus. Can anyone envision Xi, the ruler of Southeast Asia’s northern colossus, walking back or disavowing China’s maritime claims in Southeast Asia to appease China’s neighbors?

Me either. Like his predecessor, Xi has connected China’s territorial claims to sovereignty and history—and thus to national dignity—and pronounced them indisputable. By stoking popular passions, the president has rendered himself accountable to those passions—and thus, constricted his freedom of diplomatic maneuver vis-à-vis fellow Asian powers and the United States. His ability to compromise in any meaningful way appears doubtful.

So as a proponent of sea power who grasps geostrategic reality, Xi Jinping bears an acute resemblance to Theodore Roosevelt. As a statesman able and prepared to revise wrongheaded policies—fuggedaboutit.