From Beirut to Baghdad: Elections, Iran and the Future of the Middle East 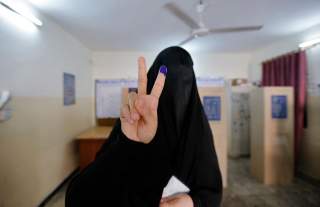 Elections in Iraq and Lebanon symbolize emerging trends and cleavages in the Middle East. Allies of Iran seek to consolidate power through the ballot box in both countries. With Islamic State largely defeated, these are the first major elections of a post–ISIS era. Although the United States, its regional allies and some European countries see Iranian influence in the region as a threat, the allies of Iran argue that they have brought stability to Iraq and Lebanon by helping to defeat ISIS and other jihadist groups. Beirut and Baghdad are key allies of Washington in the region, but Western powers face a catch-22 in both countries. The more they support them, the more Iran’s influence also benefits and its militia allies, such as Hezbollah or the Badr organization in Iraq, receive increased ballot box legitimacy.

Iraq and Lebanon are heading to elections on May 6 and 12. Both elections are important and will affect the region. In Iraq there are 6,900 candidates vying for 329 seats in parliament. Besides Prime Minister Haider al-Abadi, who heads his own “victory” list, familiar faces are competing and many of those running are incumbents. The Shi’ite strongman Nouri al-Maliki, who was pushed out as prime minister in 2014 as ISIS advanced on Baghdad, is running again. Muqtada al-Sadr, the Shi’ite cleric is also leading a list, as are Osama al-Nujaifi and Ayad Allawi. Nujaifi and Allawi’s lists receive many of their votes from the Sunni Arab minority. Among the Kurds, Nechirvan Barzani will head the Kurdistan Democratic Party’s campaign and the other Kurdish parties, such as the Patriotic Union of Kurdistan, will compete separately.

The extremely divided playing field in Iraq could be seen as a sign of a healthy democracy fifteen years after the United States overthrew Saddam Hussein. But the country is deeply divided on sectarian lines and millions of internally displaced people have not returned home after the battles against ISIS. In addition, Kurds complain that they have lost influence over disputed areas in Kirkuk and Sinjar. Prior to 2014 the autonomous Kurdistan Regional Government and Baghdad had shared responsibilities in these areas, but after the Kurdish referendum in September Baghdad sought to assert total federal control. The KDP, for instance, is not running in Kirkuk and some Yazidis have complained about the heavy-handed presence of Shi’ite militias in Sinjar. Instability in these areas, including the presence of continued ISIS activity, threaten a lower voter turnout.

Iraq’s instability over the last decade has been caused by the sectarianism in its politics. After the 2010 elections the United States sought to maneuver Maliki into power, even though is party came in second. Emma Sky, a political advisor to Gen. Ray Odierno, later wrote that the Americans decided “Maliki is our man” and that Iraq needed a “Shi’ite strongman.” Hindsight always makes things seem obvious in retrospect, but what happened after 2010 is that the United States withdrew from Iraq and Maliki’s increasing authoritarianism brought the country to instability and crisis in 2014. ISIS exploited that to conquer a third of Iraq’s territory, commit genocide against minorities, and take over most of the Sunni-Arab cities. Those cities now lie in various states of ruin and it’s not entirely clear how the voter turnout will be in these areas essential to the future of the country. Hawija, which was liberated in September 2017, has seen dozens of ISIS attacks including the killing of twenty-seven members of the Popular Mobilization Units (PMU), a Shi’ite militia. Securing polling stations in under such threats is difficult.

In Mosul election banners line the streets in the eastern part of the city, which was less damaged in the battle to liberate the city in 2016–17. Most of the banners are from Nujaifi’s Muttahidoon party, although there are many from Allawi’s Al-Wataniya list, and smaller regional parties. The presence of so many campaigns in the city just a year after liberation from ISIS shows how quickly areas in Iraq can rebound from years of extremist control.

There is much speculation about the extent of Iranian influence over Iraq’s politics. But this is probably the wrong question to ask. Iran is an ally of Iraq’s current government, it influences all the Shi’ite political figures. Even when they appear independent of it, or burnish their nationalist credentials, as Sadr does, it is only an affirmation of the power of Iran in Iraq. They need to differentiate themselves because of Iran’s influence. This is multifaceted as well. Maliki is a political ally of Iran while many of the PMU Shi’ite militia leaders who take part in elections, such as Badr Brigade’s Hadi al-Amiri, once served alongside the Iranian Islamic Revolutionary Guard Corps in the 1980s. The PMU is now an official force, which means militia leaders, political actors and Iran’s influence are a multilayered part of Iraq’s configuration. The Badr organization controls the interior ministry and has its own militia and its members participate in elections. Iraq’s saturation with Iranian influence is at a peak. Now Iran’s allies risk fighting against each other or overplaying their post–election hands in a fit of hubris.

Although Iran stands to gain in the elections, it appears that the main result will be a divided Iraq. The Sunni and Kurdish blocs are fragmented and pro-Western allies have been weakened or undermined. Low voter turnout among Yazidis in Sinjar, many of whom are in IDP camps in the KRG, and among Kurds in Kirkuk, will weaken their interests in Baghdad.

Abadi has been trying to project himself as a national leader ahead of the vote. He went to Fallujah, Tikrit, Mosul, Erbil and Sulaymaniyah, key Sunni Arab and Kurdish cities, in the last week and a half of April. It’s unclear if is his sudden appearance in those cities will affect their views of the prime minister and their entrenched local politics.

The country is more stable than in 2014 with the U.S.-led coalition still investing in training and support of the Iraqi Security Forces. There is little taste for another round of conflict. But ISIS is not defeated and it has promised to increase its insurgency. What this means is that for Iraq and Saudi Arabia the stability of Iraq will still be a key issue. Iraq recently launched airstrikes in Syria against ISIS, seeking to show off its power. However Baghdad’s desire for more sovereign control is still hampered by Turkish influence in the north, where Ankara maintains several anti-PKK bases, and the need to rebuild shattered cities.

In Lebanon, like Iraq, the parties are sectarian and the leaders are incumbents. Unlike in Iraq, the seats and the makeup of parliament are sectarian on purpose, so that the Christian, Sunni, Shi’ite, Druze divisions are not a product of the system, but the nature of it. Beirut hasn’t seen a vote since 2009 and was without a president for two years until Michael Aoun was elected by parliament in 2016.

The largest parties in the 128-seat parliament in Lebanon are Prime Minister Saad Hariri’s Future Movement, Michel Aoun, Foreign Minister Debran Bassil’s Free Patriotic Movement, Nabih Berri’s Amal Movement and Hezbollah. Even though Hezbollah, a key ally of Iran, has only twelve seats in parliament it exercises unprecedented influence over the political system as a power broker and due to the fact that it is an armed movement.

Hezbollah has been conducting Lebanon’s foreign policy in the region, sending thousands of fighters to Syria to bolster Bashar al-Assad and also fighting ISIS in the Qalamoun Mountains. The Syrian Arab News Agency noted in August 2017 that Hezbollah had brokered a deal with ISIS to transfer its fighters from near Lebanon to eastern Syria, via Syrian regime controlled areas. There is no other example of a country in the world where a faction in parliament is also an armed militia that brokers deals with foreign governments regarding defense policy of the state.

The role of Hezbollah angers Saudi Arabia, which is a close ally of Hariri. In November 2017 Hariri flew to Riyadh where he resigned as prime minister and Saudi Arabia and Hezbollah indicated they were on the verge of armed conflict. Hezbollah’s Hassan Nasrallah openly supports the Houthi rebels in Yemen who have been firing ballistic missiles at Riyadh and the Houthis have said they would back Hezbollah in a war with Israel.

Hezbollah may benefit from some small changes to the districts and proportional representation in Lebanon. In Lebanon it has sought to intimidate opposition Shi’ites who are running against it for seats. Ali al-Amin, an anti-Hezbollah candidate in the Bint Jbeil District, was attacked on April 22 while campaigning. In addition, pro-Hezbollah social media circulated a poster showing Shi’ite politicians it claimed had been paid by the United Arab Emirates.

For the first time Lebanese expats are going to the polls. On April 27 more than eighty thousand eligible Lebanese expats began voting across the Middle East. Predictions are that the elections will be uneventful and perpetuate the current political makeup in which the country is run by a loose consensus involving Sunnis, Christians, Shi’ites and Druze.