Belarus in Crisis: What Happens Now? 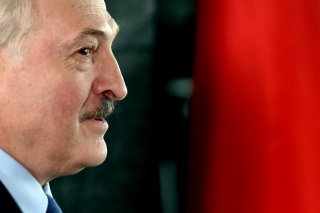 The savage repression underway in Belarus following Sunday’s electoral farce points to the desperation of a man who now realizes he stands alone.

Alexander Lukashenko, Belarus’s long-serving leader, gambled that his attempt to do the “Eurasian shuffle” would allow him to secure yet another installment in power. He seems to have miscalculated—and is hoping that brute force can keep his regime from being overthrown.

The “Eurasian shuffle”—whose most adept practitioner was the late President of Uzbekistan, Islam Karimov—is the ongoing dance by post-Soviet leaders “between Moscow and Washington to secure maximum advantage.”

Traditionally, leaders “shuffle West” in search of economic aid and political support by stressing their independence from Russia but stagger back east in order to avoid Western pressure for genuine democratization and reform. The most adept practitioners of the shuffle are those authoritarian rulers who can admit certain transgressions to their Western (particularly American) interlocutors, offer a few concessions, but then hint strongly that they can act as a bulwark against Russian aggression and expansion—while seeking to extract benefits from a Moscow anxious to purchase their loyalty, if not neutrality. And whenever the exploratory romance with Europe or the United States cooled, Moscow could always be counted on to receive the prodigal back into the common Eurasian home.

Lukashenko’s traditional approach was to secure his position by guaranteeing Belarusian neutrality and a degree of engagement with Europe, while demanding subsidies from Russia that would enable him to buy the allegiance of the population. However, that bargain frayed in the years after the Ukraine crisis of 2014,  when Lukashenko’s room for geopolitical maneuver between Russia and the West contracted. Moreover, Lukashenko, despite his willingness to work with the Kremlin, has always wanted to be president of an independent Belarusian state, not a governor of a province in greater Russia. He was reportedly unnerved by proposals that began to be floated as to how Russian president Vladimir Putin might circumvent the then-ban on standing again for the presidency in 2024—which envisioned Putin taking the helm of the currently moribund Russia-Belarus “Union State” and turning that position into a new and more powerful chief executive role that would effectively demote Lukashenko.

At the same time, given the economic contraction in Russia, and Russia’s ongoing geo-economic projects designed to reduce its need for Ukraine as a transit state (which also has the same result of reducing the importance of Belarus), Moscow began to question the whether it was getting value for the rubles it was expending subsidizing Lukashenko.

Earlier this year, two crises erupted in Belarus-Russia relations. The first had to do with oil transit and Belarus’s ability to purchase energy at below-market rates. Lukashenko depicted this crisis as a case of Russian economic aggression against Belarusian sovereignty and looked for non-Russian suppliers—including from the United States. He found receptive ears in Western capitals, and in a sign of warming relations, Secretary of State Mike Pompeo visited the country in February 2020 and declared that the United States “wants to help Belarus build its own sovereign country.” Steps were taken to ease Western restrictions on the country and the United States was in the process of restoring diplomatic ties to the ambassadorial level.

The second was Lukashenko’s efforts, prior to the August ballot, to accuse Moscow of seeking to interfere in the country’s elections and destabilize the country as a pretext for installing more pliant leaders. This culminated in a bizarre incident when mercenaries associated with the Wagner Group, en route to assignments in Africa, were detained in Belarus on the grounds that they were going to foment an insurrection. Lukashenko seemed to be hoping that Western governments would reflexively back him as a bulwark to Putin’s expansionism.

Those efforts have failed. Western sanctions are certainly going to be imposed against Lukashenko. Going further, some European states, notably Lithuania, no longer recognize Lukashenko as president and support instead the opposition candidate Svetlana Tikhanovskaya as the legitimate winner of the elections. But Moscow is in no hurry to shore up Lukashenko as he faces domestic protests and Western pressure. Putin offered relatively anodyne congratulations to Lukashenko for his victory, but over the last several months, the attitude in the Russian press towards Lukashenko had taken a harsher tone—an out of touch ruler who was willing to betray his Russian allies.

In some ways, I see Lukashenko in 2020 as similar to the position Libyan leader Muammar al-Gadhafi was in in 2011—another leader who sought to downgrade his ties with the Kremlin to seek Western support. When Gadhafi fell afoul of the Western powers, Moscow did nothing to save him.

Similarly, Lukashenko cannot be reassured by the political fate of former Armenian leader Serzh Sargsyan, who also assumed that Moscow found him indispensable in managing Armenia but who was dispensed with in favor of Nicol Pashinyan in the 2018 revolution. It does seem that the Kremlin’s preferred outcome is a Lukashenko who can hold on to power but would be seriously weakened and absolutely dependent on Moscow for his political survival, but, as Andrey Kortunov notes: “As the Armenian case shows, geopolitics limits a country’s potential allies, even with dramatically new leadership. Belarus might have more options geographically than Armenia, but the prospects of serious integration with the West are slim.” Fyodor Lukyanov thus argues, “So the Kremlin just needs to wait out the results and take it from there.”

Lukashenko may engage in a massive, even Tiananmen-style use of force to stay in power—but he seems to hope that he can depend on Chinese president Xi Jinping for the lifeline that the West will absolutely deny him now and that Russia may only provide with significant concessions. But it is not at all apparent that Beijing is as interested in Minsk as vice versa.

The United States and its European partners are and should continue to condemn the massive violations of human rights that are occurring. The pressure campaign may be showing results, as the government releases detained protestors. But this crisis also calls for a very careful and deft approach. Belarus still matters a great deal to Russia because of its vital geographic location and its role in protecting Russia’s vulnerable Western flanks. This limits the options available to the West to shape the situation while Moscow has both the home field advantage and also sees Belarus’s future as an existential issue for which it is willing to risk a great deal.

While it has been overshadowed by subsequent events, it bears remembering that the U.S. and Russia found common cause in ensuring a “soft landing” following the Georgian Rose Revolution in 2003. We also have the example of the initial deal worked out by the EU-3 in Ukraine—before it was overtaken by events on the Maidan. If an opportunity emerges to facilitate Lukashenko’s departure under terms that Moscow can accept, that is an option that we—and our European partners—should embrace.