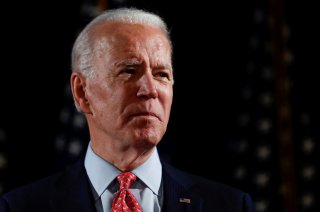 Sen. Sanders (I–VT) dropped out of the Democratic primary race and endorsed Biden on Monday, crowning the former vice president the presumptive Democratic nominee for president. The two candidates had agreed to form working groups to bridge the gap on key domestic issues. It now appears that the campaigns are also gearing up to collaborate on foreign policy.

Three sources, including two people who advised the Sanders campaign on foreign policy, confirmed that an open invitation has been sent out to Sanders foreign policy advisors who want to work with the Biden campaign.

It is understood that the invitation was made at the request of the Biden campaign, and that no such invitation had been made by Hillary Clinton’s campaign after defeating Sanders in the 2016 primary.

“I have great confidence that the Biden campaign will be a broad coalition,” Sanders campaign co-chair Rep. Ro Khanna (D–CA) told the National Interest during a Tuesday press conference. “As far as helping the Vice President on foreign policy, I certainly would be open to sharing my perspective.”

The 2020 primary race has revealed a divide within the Democratic Party between progressives, who mostly lined up behind Sanders, and moderates, who eventually consolidated around Biden.

Biden eventually won the race, but the campaign showed that progressives comprise a significant portion of the Democratic base. Sanders is expected to accumulate enough delegates to the Democratic National Convention in August to push for changes to the party platform.

“You don't get enough credit, Bernie, for being the voice that forces us to take a hard look in the mirror and ask ourselves, 'have we done enough?’—and we haven't,” Biden said during the conference. “I’m going to need you—not just to win the campaign, but to govern.”

The battle lines between progressives and moderates are not as stark on foreign policy as on issues such as healthcare. Progressives tend to back a more restrained foreign policy, while moderates lean towards maintaining the U.S.-led world order.

The moderate wing of the party in Congress has split on issues such as the ongoing tensions with Iran. Some moderates are defending the Republican-led policy of “maximum pressure,” while other moderates have joined with progressives to call for an olive branch amid the coronavirus pandemic.

President Barack Obama’s administration—which Biden served as vice president—included a mix of hawks and doves. Biden often fell on the dovish side of the administration, often criticizing the long-term counterinsurgency in Afghanistan and warning against the consequences of the 2011 military campaign to topple the Libyan government.

Several former advisors and operatives in the two camps had told Foreign Policy last week that Biden was open to adopting foreign policy positions from Sanders.

The National Interest contacted Sanders’s Senate office and Biden’s press secretary for comment. Neither have responded as of press time.

This article initially said that members of the Sanders staff were invited to advise the Biden campaign. It has been corrected to reflect the difference between staff and advisors.