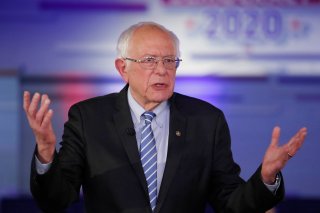 Imagine Bernie Sanders had won the Democratic nomination and then the presidency. He built a grassroots movement across the country, eschewed big donors, and was staffed primarily by Beltway outsiders. He promised to end endless wars, slash the defense budget, reject trade deals that harmed the middle class, and combat the rising tide of authoritarian capitalism around the world.

While the foreign policy aspects of his revolution were more realistic and less revolutionary than popularly understood, they would’ve been a lot harder to realize than his stalwarts think. And that’s the problem. The Washington establishment would have thwarted, diluted, and co-opted his much-needed progressive internationalist agenda in myriad ways. None would have required a grand conspiracy or illegal maneuvering. Why? Because the game of foreign policy is rigged in Washington’s favor. Here’s how.

Foreign policy is an inherently elite activity managed and implemented by technocrats. I used to be one, in the Obama administration. An incumbent president’s foreign policy vision starts getting captured in the earliest moments of staffing a transition team and taking control of the Executive Branch. A new presidency has to fill some four thousand positions as part of taking over the complex machinery of government, and the logic of the system dictates you fill as many as possible—because the fewer positions you fill, the less control you’ll be able to reliably exert over the bureaucracy.

President Barack Obama faced this situation in 2008. His presidential campaign echoed the sentiments of the anti-war Left on foreign policy. But when Hillary Clinton suspended her 2008 presidential bid, Obama brought on many of her foreign policy staff, swelling his cadre of foreign policy advisers from a handful to more than three hundred—at once unwieldy and thousands shy of the number needed to staff the government. So, when it came time to identify political appointees, he had little choice but to import the Washington think tank set wholesale, even though most were non-partisan technocrats who had no direct ties to his campaign. A mid-level political appointee at the Pentagon boasted to me in 2009 that he wasn’t even a Democrat, let alone a backer of Obama’s campaign rhetoric.

Obama’s mandarins—experts on everything from defense budgeting to counterterrorism and Taiwan policy—were necessary not only because they knew their subject matter, but they also knew how to work the levers of power in Washington; how to use expertise to influence policy. So, while Obama got us out of Iraq, as promised, he also got maneuvered by the Pentagon into surging troops in Afghanistan. Obama never once declared intentions to increase troops in Afghanistan during the campaign, but the requirement had been percolating in the think tank community that ultimately staffed him long before he took office. And whereas Obama’s campaign had an anti-militarist tinge, his national defense budget submissions eight years in a row focused on sustaining U.S. military superiority even throughout the great recession and sequestration. Prominent Democratic think tankers who ended up serving in his administration had supported military superiority as a means of underwriting the “liberal international order” years before Obama ran for the presidency. There is little indication in Obama’s foreign policy vision—during or after the campaign—that he wanted military dominance to be the standard for American force structure.

There is inevitable slippage between vision and reality for new presidents because of the enduring need for technocrats. The think tank set had specific ideas about foreign policy that did not fully jibe with what Obama had campaigned on. And on issues like Afghanistan, think tank ideas that became policy were a repudiation of what he previously represented. But technocrats implement policy and that is a kind of power all its own.

The everyday business processes of the Department of Defense will bamboozle a new president bent on change. Want to withdraw troops from certain parts of the world? Where will you put them, and how much more will it cost? Never mind that you can’t shutter an overseas base without congressional approval. Unless you institute reductions to the size of the force (which also requires congressional support) you’ll have to either relocate the troops to another overseas location or back to the United States, where the cost of basing is much higher than abroad (because states don’t subsidize bases as allies do).

But let’s say you want to substantially reduce defense spending from the top down. The Office of Management and Budget (OMB) typically sets the top line caps for each agency, including the Pentagon. So, President Sanders directs OMB to put a ceiling on defense of $500 billion. Problem solved? Not quite.

The defense budget is an aggregation of submissions from the individual Military Services telling the president what they’ll need for the roles and missions they’re asked to perform. The process as configured allows the Services to game the system. The Navy, for instance, knows that Congress would not allow them to cut the number of aircraft carriers in the fleet.

So, the Navy’s budget submission can include a Christmas list with its every desire, portray those desires as necessary to mission requirements, and leave a couple of aircraft carriers off the budget submission. Self-harm? More like jiu-jitsu. Leaving two aircraft carriers out of the budget means the Navy gets to add them to an “unfunded requirements list” reported to Congress each year. That list is all the things the Services need that are projected to have no funding—because in this example the Navy didn’t put it in the budget. So, what does Congress do when it gets military brass submitting unfunded requirements for something as basic as an aircraft carrier? They fund it, of course.

And just like that, the president’s defense budget caps become aspirational rather than real. It’s not a conspiracy, folks—it’s the military-industrial-congressional complex operating in plain sight.

Suppose you want to outmaneuver the defense technocrats by winning the battle of ideas. Decry Washington’s “threat inflation” about the intentions of revisionists like Russia and China. Highlight the risks of entanglement that alliances bring and downplay their benefits. Point to the ways the Global War on Terror has actually increased Salafi Jihadist militancy since 9/11. Since the military is sized and shaped to meet global threats, in theory the ability to define down the national security agenda can outflank the Pentagon’s budget games. Ideas, after all, are the higher terrain of politics.

But the ones that dominate Washington’s conventional wisdom will not be dislodged by intellectual contrarianism. Why? Because power has a much louder microphone and far better resourcing than power’s critics. Most Washington think tanks share in a broad national security consensus that endorses military superiority, treats China as the gravest military threat, and believes in the stabilizing role of a forward military presence around the world that at times justifies partnering with autocrats.

Challenging any of these planks pits your voice against an entire ecosystem of public intellectuals financed by corporate interests and defense contractors. The problem is not pay-to-play—I’ve spent the past six years in the think tank scene and never witnessed that kind of corruption. It’s that the establishment’s larger war chest ensures a much larger chorus of voices singing in unison a hymn that resonates with the traditional Washington power structure. Think tankers don’t just staff the government; they narrate world events on cable news, dominate Twitter, and furnish expert testimony on Capitol Hill. The monopoly—not marketplace—of ideas drowns out and indirectly delegitimizes its opponents.

Given that I’m affiliated with multiple Washington think tanks, I point all this out lamentably, and somewhat awkwardly. The national security establishment needs more intellectual diversity. It needs to de-center the role of the military. And it needs to array against the threats of extreme inequality, oligarchy, and transnational corruption that were at the heart of Sanders’s foreign policy promises.

But the Left has always been better at critiquing power than optimizing it, and it’s far easier to work with the establishment than oppose it. After all, presidents as different as Obama and Donald Trump tangled with Washington and had their agendas distorted in numerous ways. So, if you want revolution, you better have a plan beyond people power. Because Washington sure as hell does.

Van Jackson, Ph.D., is a professor of international relations at Victoria University of Wellington, host of The Un-Diplomatic Podcast, and author of On the Brink: Trump, Kim, and the Threat of Nuclear War. From 2009-2014, he served as a strategist and policy adviser in the Office of the Secretary of Defense. He has served as a consulting (unpaid) foreign policy adviser to three presidential campaigns during the 2020 Democratic primary. His views are personal and do not reflect those of the institutions with which he is affiliated.